And we’re back! Joining Michael Raso in the studio today is Leslie Lazenby, Mat Marrash, Mark O’Brien, Mark Dalzell, and of our course, our listeners (not really in the studio, but listening to us where ever you are!) On today’s show we have pointers on shooting the new Ektachrome E100 (and any E-6 film for that matter), the Kenflex TLR, Listener Letters, the Lensbaby Velvet 56, the Doctor is In, and much more - so grab your coffee crisp and ketchup chips (because it is Canada Day) and don’t touch that dial!


Mat kicks it off with how to handle difficult scenes when shooting E-6 colour positive film. Now your average E-6 film doesn’t have the same dynamic range you'll find (details in your highlights and shadows) in your average C-41 colour negative film. Extra care needs to be taken not to blow out your highlights (too white, and there's no detail in the whites) or crush your shadows. Care also needs to be taken with colour balance, which can be achieved with a colour correction filter. We suggest using the meter in your camera or hand-held light meter - bracket your shots 1) one as metered, 2) one underexposed and 3) one overexposed. And since slide film can be expensive, Mat suggests using your meter as opposed to a mobile app - and always take your time!

Lensbaby has always embraced the strange and odd when it comes to their lenses, and they offer a fantastic set of fun lenses that while aimed at digital cameras can efficiently work on your film cameras as well! Mark O’Brien has one of their latest releases, the Velvet 56 - the lens is a beautiful manual focus lens, with apertures from f/1.6-f/16. There are no couplings, so you have to stop down to meter and run your cameras in full manual or aperture priority. If you’re shooting between f/1.6-f/5.6, you get some images that look like they’re shot on lenses 100+ year old, f/5.6 and up - the results are spectacular! The lens isn’t cheap, running at 400$ (USD) but you get a well-made lens, not a cheap plastic. The lens is available in Nikon-F, Canon-EF, Sony-E, and Fuji-X.

A listener writes in with a question for Dr Leslie about the differences between 35mm and 135 cameras. Leslie explains that they are actually the same: 35mm is the film size, and 135 is the designator for the format that is still found on modern film boxes today (or miniature format as Mat tosses out). The same goes for 126, in that the frame size was initially planned to be 26mm, it’s actually 28mm -  but no one cared enough to change it. Where this all goes out the window is with 120 film, the film isn’t actually 120mm or even 20mm for that matter, the number 120 is just a number Kodak assigned to the format. And if you look back far enough, the plethora of film formats and sizes boggled the mind! 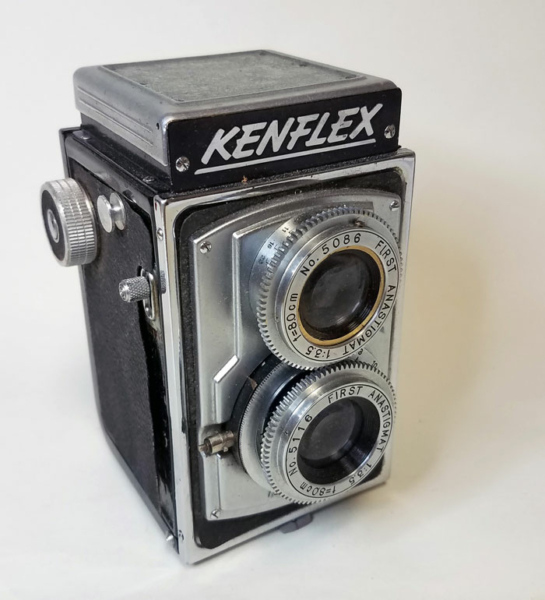 Mark Dalzell has a funky little TLR called the Kenflex. But if you try and look for the camera online, you'll have a difficult time finding it since the Kenflex is the Americanised Firstflex. The camera itself was made in the 1950s in Japan. It’s pretty close to a respectable TLR according to Mark with an 80mm f/3.5 Anastigmat lens for both viewing and taking. Film loading is done through a red window. Shutter speeds run from 1/10” to 1/200”, apertures from f/3.5-f/22. There’s a PC socket for flash, but you need a bracket to mount the flash, and Mark isn’t sure if it’s M or X Sync’d. Despite feeling very light and aluminium it's fair balanced and pleasant to use, although due to a focusing issue Mark hasn’t actually had the chance to use it. Think of it as a middle step between a Kodak Faux-TLR and a Cheap Japanese TLR. They can be found quickly and are pretty cheap, running at 30-40$ on the ‘bay.

Is there such a thing as bad light? Well that depends on who you ask! The gang chimes in, stating that while yes, you can throw on a flash and snap away there is something to be said about getting out at the right time of day to get the light just right, and your photos will be better for it! it shows! Leslie comments that she finds hard contrasty light perfect for testing film. Mark offers up that there’s no bad light; there are just bad film choices. Sometimes you need to pick the right film for the lighting conditions you’re in, suggesting slow films for super bright days (Pan F, RPX 25, Infrared) and HP5+ and Tri--X for dull cloudy days. So maybe there’s no bad light, there’s just difficult light, and it might take a bit of experimentation to get things right. The more you experiment, the easier it will get!

That’s it for this episode, but don’t fret we’ll be back in a short two weeks! Until then, you can write to us by email at podcast@filmphotographyproject.com or by the post Film Photography Podcast PO Box 264 Fair Lawn, NJ 07410. Be sure to join our community on FPP Flickr Group and the FPP Facebook page. And if you want the latest news head to our website and sign up for our newsletter!