It’s the Internet Radio Show for people who love Film Photography! Joining Michael Raso in the studio today is Leslie Lazenby, Mat Marrash, Mark O’Brien, and Mark Dalzell! Topics on today’s show include Light Leaks and Light Piping, the McMurdo Tech Press Camera, DIY Film Photography ‘Zines, the Leica MiniLux, and so much more! So hop in the time machine of your choice (Police Box or Phone Booth) but don’t touch that dial!

Do It Yourself – ‘Zines
‘Zines have been a part of a lot of sub-cultures, with some of the first being produced as early as the 1930s. The name is shortened from Magazine or Fanzine and implies a limited circulation (officially under 1,000 copies, but most don’t break the 100 copy mark). Many film photographers today use 'zines to share their work, and some even employ the original method of cutting and pasting content together and then photocopying the publication numbers.  Mark O’Brien has a long history of producing similar products, and shares some tips on how to create your own zine (as well as highlighting several 'zines he enjoys). If you don't want to create and print one yourself, there are online self-publishing options such as Blurb to produce and print (and Blurb even has two pieces of software that aid in the design aspect of the work).  Some of the talented photographers using this medium:  She Shoots Film  -  this 'zine highlights the work of female photographers, and is produced with the help of Blue Moon Camera.  It reminds Mark of Aperture Magazine in its content and production value. Next All Through a Lens, produced by Eric Wanger ,  which is available through his Etsy Storefront. Eric uses a 4x5 to shoot most of the content on expired film stocks. His subjects often have some historical connection, and are accompanied by text providing valuable if sometimes somber context. Arriving in the FPP mailbox recently is Land and City  by  Zach Storer, which is filled with stunning images (that might benefit from captions). Another new 'zine to arrive at FPP from Chris Smith, is The Enchanted Hunter   , an entirely hand-made limited edition zine featuring models "wearing" antlers. Mark advocates zines as an inexpensive way to highlight your work and one that provides you with a tangible item to hand to others while cautioning that it is always beneficial to enlist another person's option on your curating and copy before going to print.  Mat adds that a 'zine allows you to forgo sponsors and advertisements, and helps forge a direct connection to the viewers. If you have a 'Zine, we would love to see it - send us a copy or shoot us an email about it! 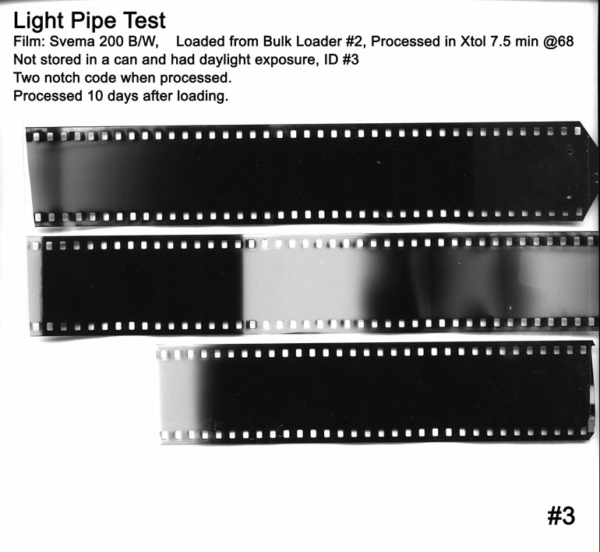 Light Leaks and Light Piping
Leslie is the FPP expert answering most of your emails on light leaks and light piping, edge exposure and fogging on the hand-rolled film we sell here at the FPP. When investigating the issue, the first thing Leslie asks for is a photo of the negative itself.  From that, she can determine whether the issue is the camera, the darkroom or light piping (and it's almost always light piping!). Another name for light piping is edge fog or edge flare. This generally occurs at the beginning or end of a bulk loaded film, but you can also have fogging further along. This is usually found on polyester base films, which often behave like fibre optics in that the light is carried along, having a cumulative effect. An anti-halation layer can help mitigate the piping. Some films don't have an anti-halation layer, and consequently are more inclined to light piping. If you have a box of HIE, you’ll notice that it instructs you to load and unload in total darkness - this is because it lack an anti-halation layer. Some of the films we sell, such as Derev Pan 400 or Svema Foto 200 are susceptible to light piping, so best to store them in darkness and load and unload in shadow. Also, it's good to ensure that the light seals or traps in your camera are functioning properly to help reduce the effects. In short, best practices is to store in darkness, keep them in the dark canisters if taking outside, and shoot the first couple rolls before getting serious! Watch for a full out blog by Leslie shortly! Read Leslie's FULL REPORT on Light Piping. 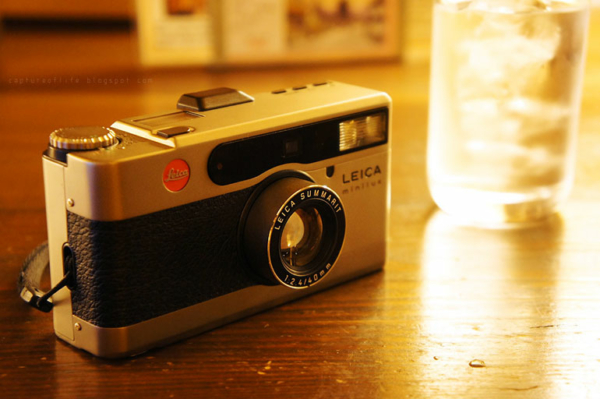 Leica’s Point-And-Shoot – Poor Man’s Contax
Yes, Leica produced their own point-and-shoot and Mat has it with him today - it's the Leica MiniLux. If you’ve been following along you know the obscene prices of point-and-shoot cameras these days due to the Contax-Effect ( wherein social-media savvy celebrities use high-end point-and-shoot cameras like the Contax T2 and T3 which then drives prices sky-high). An exception is the MiniLux, which seems to have skated under the radar. The MiniLux comes in a Zoom Lens (which Leslie spoke about back on Episode 219), as well as a fixed lens version. Oddly enough, both these cameras were produced in Japan by Panasonic (as opposed to Germany). The MiniLux first popped on the market in 1995 with a Leica Summarit 40mm featuring a f/2.4 lens, which while sharp is a little soft on the corners. The lens is autofocus, can be forced it into manual focus, but unfortunately lack close-focus. The camera uses DX-Coding reading speeds from 25 to 5000, with shutter speeds ranging from 1 second to 1/400th-second plus bulb mode. The camera can be run fully automatic or aperture-priority. It also has a built-in flash. And while Leica produces the camera, it’s often ignored by Leica shooters in general. Mat has shot a lot with it and is pleased with the results. Which isn't to say they are cheap: a beater will run from 500$ whereas a top quality one is around the 900$ range.  The best place to find an affordable model is on eBay, especially Japanese sellers. 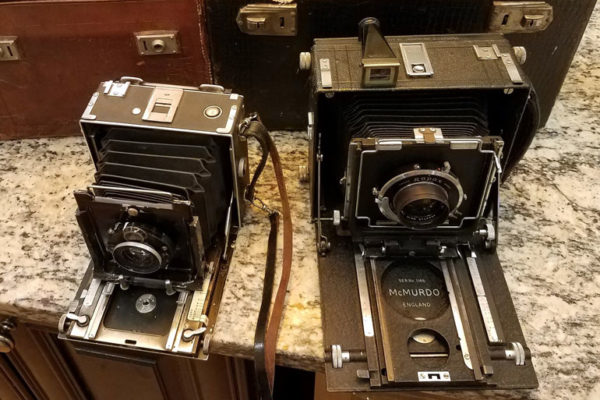 McMurdo Mysteries – The Technical Press Camera
Mark Dalzell brought in a new camera he found near our studio in Fair Lawn NJ:  The McMurdo Technical Press Camera. Researching the camera's history proved a lot more difficult than he expected, until discovering it is a model by MPP or Micro Precision Products Limited,  a company that produced cameras between 1941 to 1982, beginning with the Celestion Ltd, which had a subsidiary in McMurdo Instrument Company. Mark's camera is a Micro Technical Camera that takes standard 4x5 sheet film, and appears to be the first of the cameras released by MPP in 1948. Several updated versions of the camera were released between 1949 and 1963, with two more planned but not coming to fruition. The camera originally came with a rangefinder, but on Mark’s example, it was removed in favour of a cold shoe. Online it’s often mentioned in the same sentence as Linhoff. While rare in the United States, they are available in England and will run you around 500$. Mat describes the camera as having the best parts of the iconic Graflex press cameras combined with the best parts of the Linhoff Technica III - it's a well made camera that will last for a long time. Mark loves it, is impressed with the results and is looking forward to using it more. Since it's a 4x5, it's compatible with any number of lenses providing that the lens has the right image circle.The only downfall is that it takes older ‘pointy’ Linhoff boards, which are only good on pre-Technica III boards. In general, it’s a pretty sweet camera!

That’s it for this episode, but don’t fret - we’ll be back in a short two weeks! Until then be sure to give us a like on Facebook and sign up for our newsletter! You can also join the community over on Flickr! If you want to write to us, you can shoot us an email podcast@filmphotographyproject.com or write to us at Film Photography Podcast PO Box 264 Fair Lawn, NJ 07410.