It’s the Film Photography Podcast and joining Michael Raso in the studio today is Mark Dalzell, Mark O’Brien, John Fedele, and Leslie Lazenby! Topics today include the Kookie Kamera, Franka Solida III, Argus Vs. Kodak, and so much more, so stay tuned!

Are you heading to the Film Photography Paideia event at The Darkroom in San Clemente, California from March 2nd to 3rd? Well, we are too! Michael Raso, Mat Marrash, and Mark Dalzell will be guests at the 2nd annual workshop,  a weekend of speakers, workshops, and general events for all levels of photographers, from amateur to professional. Check out the event page over at TheDakroom.com if you’re attending, and if you’re a listener of the show be sure to come up and introduce yourself we’d love to hear from you!

We've introduced a new version of one of our most popular films, FPP Retrochrome - Retrochrome 400!  Due to your feedback, these are new, longer 36 exposure rolls with an ISO of 400. It'll be available next week! And speaking of new products, March 5th is the launch of Derev Pan, a line of spectacular B&W aerial surveillance film out of Ukraine! 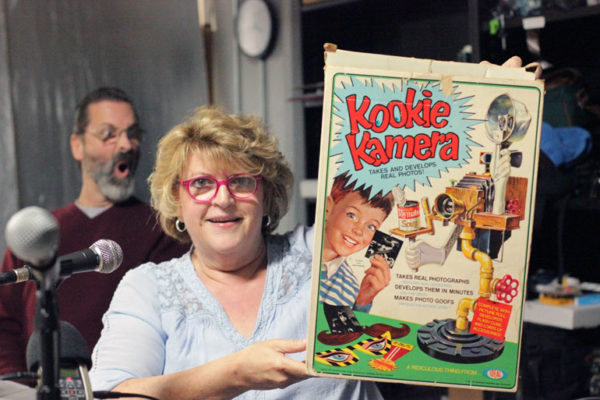 Kookie!
What is the weirdest camera you’ve ever shot with? Well no matter how weird you think yours is, Leslie’s is weirder - meet the Kookie Kamera, a toy camera produced in 1968 by the Ideal Toy Corporation of Hollis New York. The camera takes images (8 per roll) on photographic positive paper measuring 1.75” square, and has a secret compartment that holds chemistry that actually develops the photo paper as you pull it out! Leslie had to purchase three Kookie Kamera kits in order to find one with the photographic positive paper and assemble one complete, functioning camera (there were two versions, but they are really just the same camera in different colours of plastic) (moving forward, she intends to use modern Photo paper). So what does the camera look like? Well, it’s a cartoon press camera mounted on water pipes on a stand which looks like a manhole cover. There’s a hand holding a flash gun, and another hand holding up that Toymato secondary lens, and yes, that Toymato Lens looks like a can of tomato soup. And the whole process to use the camera is just as weird, as Leslie ran through every step needed to take a picture! Also included in the box are a bunch of kookie disguises as the cameras were marketed for kids.  Which is pretty amazing considering all the chemicals the camera uses to self-develop...and you know that they didn’t read the 5000-page manual! Leslie does warn about the chemistry (and while it is non-toxic, it’s advised not to drink it) and mentions the number of lawsuits against the company post-ingestion. The Kookie Kamera is rare and sought after by toy collectors, and can easily run over 100 dollars on eBay. 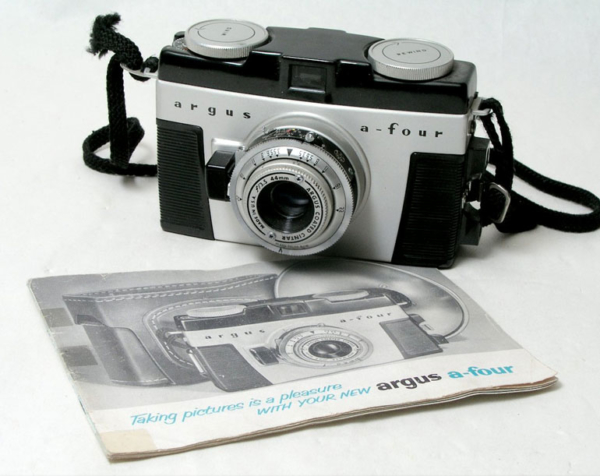 American Giants – Argus v. Kodak
Mark O’Brien has brought in two popular 35mm film cameras from the 1950s - the Argus A-Four and the Kodak Pony 135- to pit against each other. First, the Pony - optically the Pony ran with a Kodak Anaston 51mm f/4.5 lens with shutter speeds ranging from 1/25” to 1/200”  and cost 35 dollars in change. Mark loves his and often uses Kodak Gold 200 35mm film in the camera with spectacular results. Next, the Argus A-Four - slightly smaller than the Pony, the Argus features a Cintar 44mm f/3.5 Lens, so its faster and wider than the Pony and has a closer focus.  Shutter speed range is equivalent on both, and both are plastic bodies. So which one does Mark recommend if you want a classic camera from the 1950s?  Despite calling Ann Arbor (the home of Argus) home, Mark recommends the Pony. He finds it a sturdier camera, and the collapsible lens makes it more compact. Optically they’re pretty close especially stopped down. If you’re looking for one, don’t spend more than 20 bucks on it, and make sure you get the Pony 135 (Original, Model B or Model C all work well) - just avoid the plastic-y Pony IV with the EV system for setting exposure. 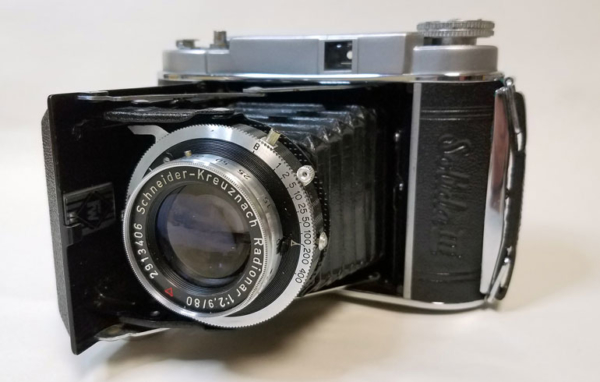 The Franka Solida III
Mark Dalzell has with him today the Franka Solida III; this is a 120 folder than produces 6x6 negatives made in Germany between 1936 to 1962. Mark’s version comes from the mid-1950s and is in beautiful condition. Like all Folders, the camera lens pops out on bellows, and this one features a Schneider-Kreuznach Radionar 75mm f/2.9 lens with shutter speeds running from 1 second to 1/250” which produces good sharp images. Since the camera is a scale focus camera, an external rangefinder is a must if you’re not too sure of your ability to judge distances. Mark likes that the shutter release is on the body, not the lens barrel itself - although the shutter was a bit sticky, but some basic tools and naphtha got it running right as rain. On the used market they run between 75-100 dollars on eBay. 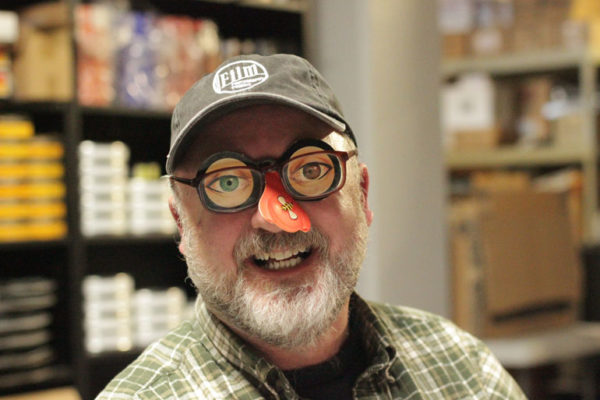 Above: Mark O'Brien wearing one of the many Kookie Kamera disguises!

Eco-Friendly D-76
We all know that photo chemicals are not exactly the safest things out there, so we were interested when we saw a recent article on Tim Layton’s website, in which he published a formula for a more eco-friendly version of Kodak D-76. Kodak D-76 isn’t the most toxic developer on the market, but it does contain a chemical, Hydroquinone, which acts as a supercharger for the developing action but also is a carcinogen. Tim’s formula eliminates the Hydroquinone but increases the amount of Metol (another developer). To make it yourself you start with 750mL of distilled water at 125F, 2.5g Metol (Elon), 100g Sodium Sulfite (Anhydrous), and 2g of Borax (Granular) and then top up to 1L of water. Tim recommends that you use the D-76 ECO as a one-shot (1+1) developer. It is important to use the warmer water to start with and add the chemicals in the order they’re listed. As for times, use your standard D-76 1+1 times. You can pick up the individual chemicals from Photographer’s Formulary.

And that’s it for this show! After a short winter break we'll be back on March 15th! You can follow along by subscribing to our Newsletter (sign up at our home page), joining our online community on Flickr. You can also write us through email, podcast@filmphotographyproject.com or by the postal service: Film Photography Podcast PO Box 264, Fair Lawn, NJ, 07410. Until next time!