Wishing you all a wonderful Holiday season, and a very happy New Year - we've put together a special New Year's Day 2019 episode! Mat Marrash and Joseph “Joby” Brunges join Michael Raso and Mark O’Brien to explore a variety of topics including large format cameras and lenses to film and technique, the Razzle 9000 and the Zeiss Ikon and much more.  So  grab that coffee and turn up the volume and nurse your (food) hangover along with the FPP!

If you’ve been following the FPP for some time, you know that Mat is our resident large format expert, and Joby does some amazing wet plate work. Now modern glass and wet plate don’t always play well together, but thankfully there’s still plenty of older lenses and optics around that you can add to your kit to make it work. (and at this past Walking Workshop, Joby brought in several amazing pieces of glass with which to demonstrate). 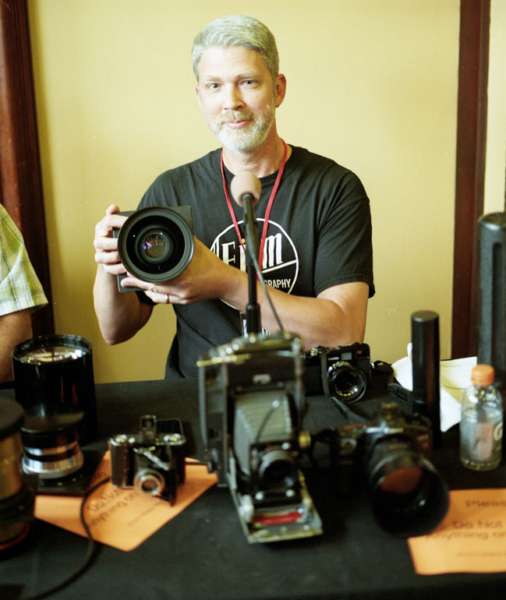 above: Joseph Brunges and his cameras!

Now, Joby is going to walk us through his kit:  the first lens may look old, but it’s only a year or so old - it's a modern take on the Dallmyer 3B lens, which is an iconic Petzval type lens for portraits. It's produced by Eckhardt Optics, who reproduced the Dallmyer 3B with modern materials. Sadly these only saw a limited run; only 60 were ever produced. Of course, if you do find an original Dallmyer, Mat recommends you get it, since it will really make your wet plate portraits sing (and the price is only going UP). So, the Eckhardt lens takes the standard Waterhouse stops, which are plates that slide into a slot on the lens to act as an aperture (as the lens doesn’t have blades like modern lenses). Mat joins in on sharing a recent lens find; his mom discovered an Ilex Portrait F/5 lens in a box of shoe stretchers, which she promptly gave to Mat. The lens dates back to the 1920s, and was the cheapest version of the Portrait series (they had a f/3.5 version) which when new was only 14$ (200$ in 2018). The lens included a shutter, which being the ball bearing type still works near perfectly with speeds from 1/100” to 1” plus Blub and Time (sadly there’s some fungus growing, so Mat’s had to sequester it from his other optics). But for working in Wet Plate, the shutter isn’t 100% needed, because of the low sensitivity of the process - you’re looking at 1 second or slower, so often just a lens cap is needed, and a stable tripod. The trouble is that often these older lenses don’t fit on modern boards, so you’re often seeking out specialised production. Mat and Joby recommend SKGrimes. 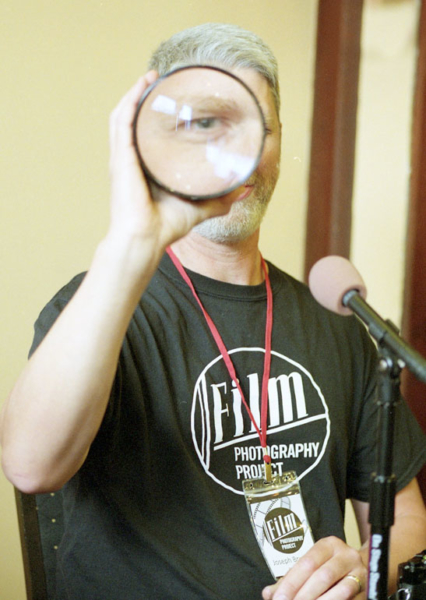 They have amazing customer service and a great product, and while they ain’t cheap, you only have to buy the product once! Back to the lenses, and referencing back to those Rochester Optics, the heaviest lens in Joby’s kit is a Bausch & Lomb 12” (305mm) f/6.3 aerial surveillance lens from the Second World War. The lens itself has an internal aperture which makes it easy to stop down, and because of its former life produces amazingly sharp images. But because of its weight you have to be cautious about the camera you mount it on, since the front standard needs to be sturdy. The most famous of all the aerial surveillance lens is the Kodak Aero-Ektar, but this command a high price especially if you buy it already mounted and ready to use on your existing large format camera. You can also buy it in various states, the least expensive being one that is still mounted to be used in an aeroplane. If you’re interested in getting one ready mounted, Central Camera in Chicago has one for grabs! Another unique way to shoot large format is to use an old projector lens, like the Beseler 18” (460mm) f/3,2 Opaque Projector lens, which is a great fast portrait lens - unfortunately, Mat's isn't mounted (yet), he’s in talks with SKGrimes. Joby’s lens is from the high school where his father once taught (when his father retired the school shut down the darkroom, and he was able to take everything with him). The lens does work on 20x24 cameras, but is best on 8x10. While Joby wants to shoot larger, he doesn’t have space in his current wet plate tent to support anything bigger. Now, this brings up a very good point; Mat explains that when you’re shooting large format, the lens is pretty important to the size of your film. Not all large format lenses produce the same image circle to cover the sheet that you’re shooting - the ones that do can be beasts that need their own briefcase. The Schneider-Kruzenak Super Symmar-XL 210mm f/5.6 lens has such a huge image circle you can use it on 4x5 with every movement known to man, but Mat got the lens specifically for his ultra-large format camera where it serves as his ultrawide angle lens, and the aspherical elements keep those straight lines straight. 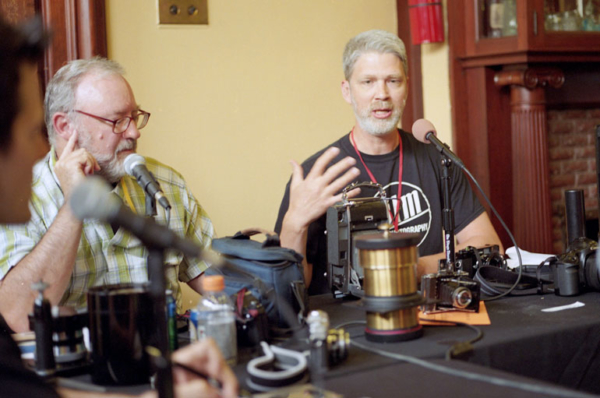 Switching gears (or rather formats), Joby also shoots smaller formats and brought a little Zeiss Ikon Rangefinder, which looks tiny next to his large format kit. This modern camera built by Cosina for Carl Zeiss was first manufactured in 2004, hit the market 2005 and 2006, but ended in 2012. Built on the Cosina Voigtlander Bessa series of 35mm rangefinders, it was designed to stand up to the Leica M7 and use the ZM-Mount with shutter speeds going just that much faster, and the viewfinder being a bit brighter (but the rangefinder patch is dimmer). Joby, being an SLR or Large Format shooter, found switching to a rangefinder a bit difficult, but then lens that kept him coming back was the Zeiss Biogon 28mm f/2.8. The one trouble is that in bright light the shutter speed indicator inside the viewfinder is hard to see (since they aren’t manufactured anymore they have gone up in price and bodies can go as high as 1000$). As a large format shooter, Joby finds that he does shoot differently with an eye-level camera as opposed to a large format, from the style of image to the technique. With an eye-level finder he can be fairly quick, but when shooting large format portraits he like to think of the additional time required as building a relationship with the subject. 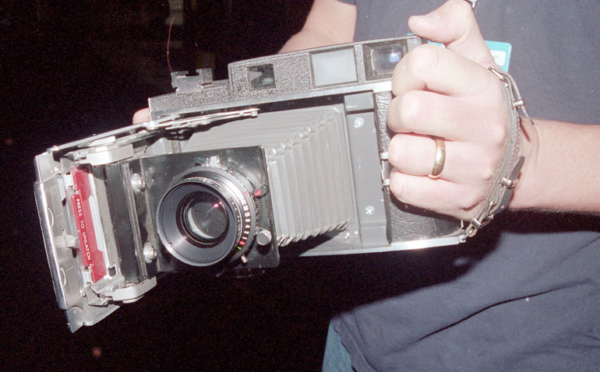 The Razzle 900 - Dean Jones converted an old Polaroid 900 into a 4x5 rangefinder camera!

Returning to the topic of large format, Joby brought a camera that is no stranger to the FPP as he brought it to one of our PDN meetups in the past. At its core, the Razzle 900 is a Model 900 Polaroid land camera that has been converted to shoot 4x5 film by Dean Jones in Australia (who sadly passed away a few years ago). While Joby isn’t a fan of the name, the quality of the conversion is top notch -his features a Schneider lens and has travelled the world with him. Because the camera is an old Polaroid, the focusing is done by the rangefinder, but because of the age of the camera the patch has gotten dimmer over the years and doesn't work well indoors. While the camera can take standard sheet film holders, to help make it portable Joby uses a Grafmatic back, which gives him six shots per holder (you can also use a Fuji Instant back or a ground glass and a tripod). But these holders are getting older, and if you have a beat up one, you’re going to lose those six shots. Not to be outdone, Chamonix has their version of the Razzle, called the Saber. According to Mat the camera is highly sought after and is another Polaroid camera, but it’s a conversion of an Auto-Land camera. Unlike sometimes flimsy 3D printed large format cameras, Mat feels cameras like the Razzle could survive a nuclear war.

Of course, Mat feels that it takes the same level of camera to shoot wet plate, large format, as it does to shoot half-frame or 110 even 16mm camera. Because in the end if you get an image that you like, it doesn’t matter how you shot it. It’s all about the love, the time, and the effort you put into it.

But that’s it for this show, but we'll be back in just on week - until then, you can always interact with the whole community over on the FPP Flickr group. Be sure to give us a like on Facebook, and sign up for the FPP newsletter (Right on our home page). Sending us out is Kevin Neblung and That Dead Girl, Darren Reily with Dead Jennifer, and the all-new UMM track! Shoot us an e-mail - Podcast@FilmPhotographyProject.com 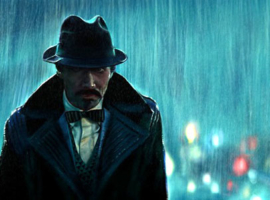