Film Photography Podcast – Episode 210 - December 15, 2018
The Holiday Season is swiftly approaching, but that isn’t stopping the FPP!  Joining Michael Raso in the studio today is Leslie Lazenby, Mark Dalzell, John Fedele, and Mark O’Brien! On today’s show (what show?) we’re talking the FPP Emulsion-X (the film with the best theme song), the Purma Special Camera, Book of the Show, and so much more! So turn down the Hungry Dutchmen and turn up the FPP!

The FPP Store - Perfect for that Film Photographer
Looking for a gift for that film photographer in your life? There’s still time, and the Film Photography Project Store has set up a Filmtastic Gift Idea section with two pages of everything from stocking stuffers to big ticket items! How about a sampler of Kodak films, in an original Kodak bulk roll can!? FPP Apparel, Gift Card, Cameras, Film, Pins and more! Head on over to the FPP Store today to finish up that Christmas shopping.

The Doctor is in – Roll Life Expectancy
Resident  FPP Doctor Leslie has our latest patient, and their question is a big one. They’re looking for an honest answer to the number of rolls a single C-41 Processing Kit can process. Now to get some context, we’re talking about the 1 Liter C-41 Color Kits. Once chemistry leaves the factory and is mixed, the number of rolls are dictated by how you store your chemistry and the number of rolls you processed each time. For Leslie, she finds the best way to store colour chemistry is in glass bottles with marbles to ensure as little oxygen gets in as possible. Mike prefers cheap, empty 1-liter water bottles - easy to squeeze out extra air. Because there are so many variables that can affect the chemistry is why there’s no hard-and-fast number. But if you want a specific number, Leslie processes 13 rolls per FPP Liter Kit, right by the book. Mike and Mark O'Brien process 20 - 25 rolls. But the best way to figure all this out is to read the instructions provided right in the kit! 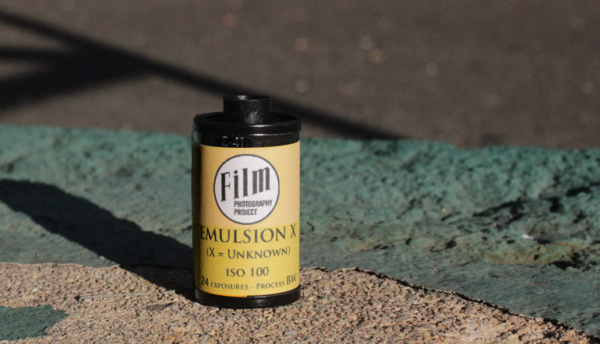 Emulsion-X – The FPP Film with a Theme Song!
You may recall last spring we talked about a strange film that showed up on the FPP doorstep. Mark O’Brien has been working hard in the lab testing the weird, strange, and mysterious Emulsion-X film!  But his first tests were failures - curly, blank, and just awful looking. But after forgetting about it for several months, he stumbled across them again, placed them on a light table and lo-and-behold, there now appeared magenta-ish ghosts on the negatives. 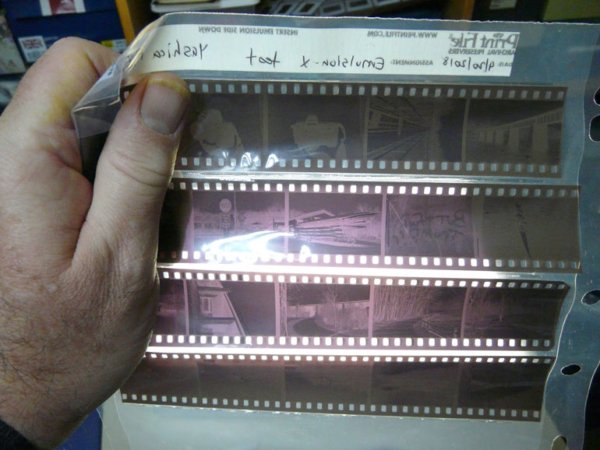 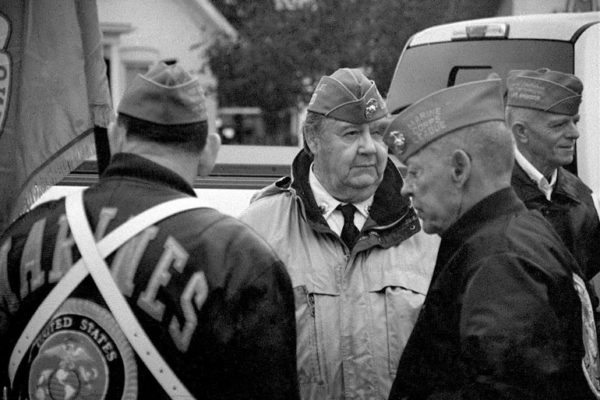 Firing up the scanner, Mark got some contrasty yet fairly decent images. So what do we know about Emulsion-X? Well, it’s a black & white film that sits on a fairly thick base. From developing, Mark thinks that it once was designed for positive (slide) application. The grain is fairly thick, peppery. Both Mark and Leslie used Xtol (Stock) at 8 minutes exposing the film at ISO-100, and the film does not respond to any push or pull. Leslie also tried HC-110, which didn’t yield any results. But if you shoot the film, you’re going to get foggy negatives, soft focus, and gritty grain. The very last batch of Emulsion X will be offered the week of December 17th. Please sign up for the FPP On-Line Newsletter right on the home page so you don't miss this weird film experience! 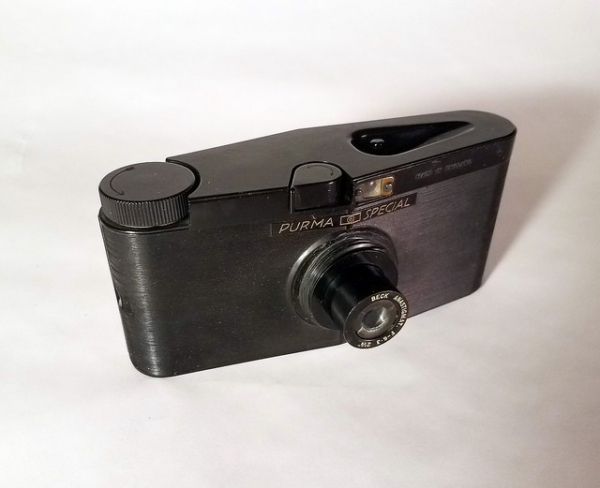 The Purma Special
Mark Dalzell discovered a camera that even he never heard of, and that goes for both the camera and the company. Mark has recently visited Bath, England and during his time there he walked through a flea market looking for something interesting and happened across this slick little art-deco camera. The Metropolitan Museum of Art has one of these in their permanent collection. The Purma Special, made from 1937 to 1951, is an all Bakelite camera. The sleek style is probably thanks to the two men who founded the Purma Camera Company in1935, Alfred C. Mayo, and renowned artist Tom Purvis. The camera itself was designed by Raymond Loewy, and came equipped with a Beck Anastigmat 2.25”(~57mm) f/6.3 lens, both the focus and aperture are fixed and shots 127 format film each roll has 16-exposures at 1.25”x1.25”. And now comes the cool part about the camera, the shutter speeds - the camera has three different speeds,1/25”, 1/150”, and 1/450”. But what makes it awesome is how the speed is controlled. The shutter consists of two curtains, and the speed is set depending on how you orient the camera, which is why the film exposure is square. Keep the camera horizontal you’re at the medium (1/150”) speed, a vertical-tilt with the film advance down to shoot at slow (1/25”) speed, and a vertical-tilt with the film advance up is the fast (1/450”) speed. Of note, the camera was the first to have acrylic optics at least in the viewfinder (the camera has caught Leslie’s attention and is now on her bucket list). 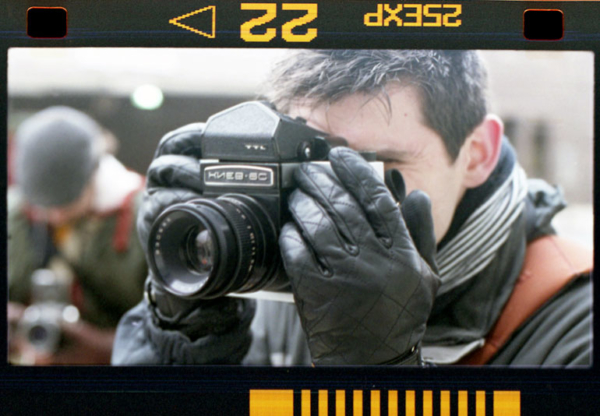 It's Cold Out There!
An FPP listener wrote in with a question about film storage. They remember hearing that when you store film at 0C or 32F or lower it can stop the ageing process of the film. And Leslie knows that while it doesn’t stop the ageing process, it brings it to a slow enough crawl that it’s darn close. Of course, if you want to go and shoot it, you’ll need to warm it up first to avoid condensation from getting onto the emulsion. Usually, let it sit out for about 24-48 hours before loading it up. Of course, this process only works on colour and black & white films, it does not help Infrared films. But what about just regular shooting out in the harsh cold of winter? Well, although that does not affect the film sensitivity, be careful about using power winders as it could strip the sprocket holes. But it certainly means if you freeze your stockpile of Acros 100, you can be shooting it for years to come. 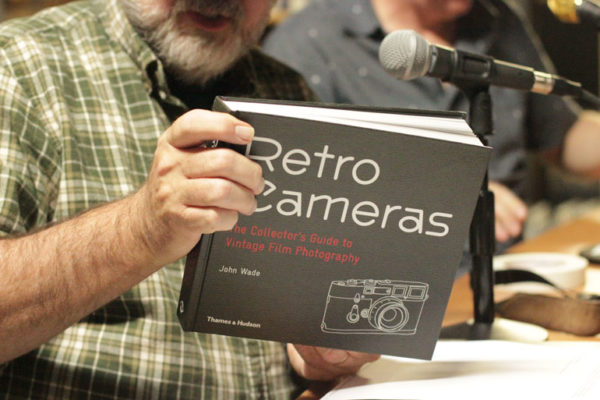 Book of the Show – Retro Cameras
Mark brought in a relatively new book from his near-infinite library. The book is by John Wade and titled Retro Cameras, the Collectors Guide to VintageFilm Photography. If you love Camera Porn, then this is the book for you. But it’s also dangerous because there are cameras and accessories such as rangefinders and light meters in here that we rarely see photos of in colour. This book goes way beyond camera collecting, it also includes sections on value and rarity,  guides on use, in-depth reviews and test-drives of these retro machines. The book itself, despite the content, is fairly inexpensive and you can find it online on Amazon!

That’s it for this show, but we’re not done for 2018 yet, so stay tuned for more! We love to hear from you, simply email us at podcast@filmphotographyproject.com or send a letter to Film Photography Podcast PO Box 264, Fairlawn, NJ, 07410.

If you're looking for the latest in FPP news, be sure to sign up for our newsletter (right on our home page), like us on FPPFacebook and join in with the rest of the community through our FPP Flickr Group Forums! 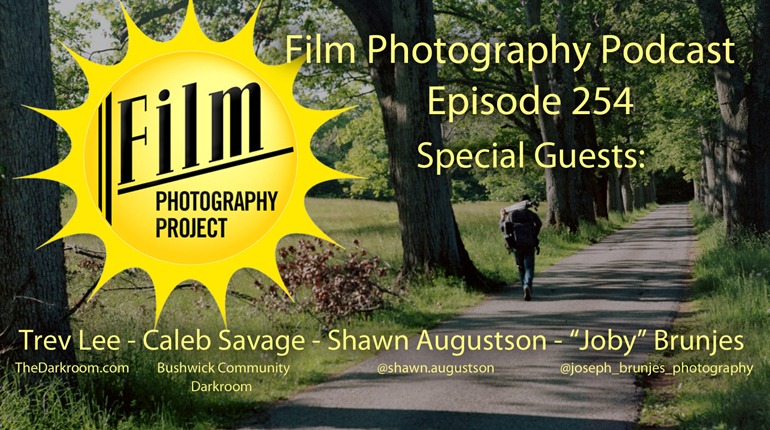