Hey, folks - coasting on caffeine and joining Michael Raso in the studio today are Leslie Lazenby, John Fedele, Mark Dalzell, and Mark O’Brien. Today’s topics are the Viewmaster 3D Camera, PinBox Camera, the Yashica ME-1, and so much more - so grab your warm beverage and stay tuned to the internet radio show for people obsessed with film! 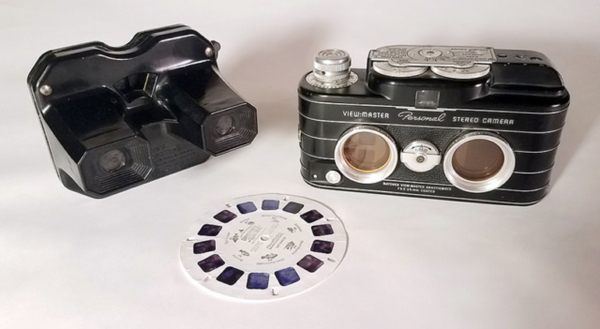 ViewMaster 3D – Not Just a Kid’s Toy!
We all know Mark D loves crazy cameras, but according to him the View-Master Personal Stereo Camera takes the cake! Produced from 1952-8 by the Sterocraft Engineering Company for Sawyer’s, this is an amazing art-deco style camera. But here’s the catch, to create those view-master images you do need to shoot a color slide (positive 35mm) film. The camera features a matched pair of 25mm fixed-focus View-Master Anastigmatic lenses with apertures from f/3.5 to f/16, with shutter speeds ranging from 1/10 to 1/100 of a second plus Bulb (B). While the camera doesn’t have a meter, it does feature a unique wheel to adjust the “ExpoSure” calculator – using geared wheels to adjust the aperture and shutter speed according to lighting conditions outside. The camera also has a spirit level, cable release, and the ability to slice up the negatives to mount into the view-master reels. But wait, how can you do that, are you wasting film? Surprisingly no, in fact, you’ll get more images per roll. When you shoot your roll through for the first time, it exposes the bottom part of the film, giving you about 69 pairs for a 36-exposure roll.  Then change the front dial, and shutter moves up, reverses the advance and shoots across the top of the roll giving you another 69 pairs, while sending the film back into the cassette. And you thought half-frame was bad! Unfortunately, the machine that produced the view-master reels broke in the 1990s and wasn’t fixed. So do be aware that the used cameras are cheap, but the cutters are expensive (and you can still find the reels on the second-hand market). But if you’re up to a challenge, you can try to cut the frames manually and mangle a commercial reel – but be sure that the frames are aligned perfectly! Despite all the challenges, Mark is looking forward to taking the camera on vacations and capturing some unique shots. If your interest has peeked, why not check out the View-Master Website for all the details on the cameras, viewers, and more (plus some amazing 1990s website goodness)! 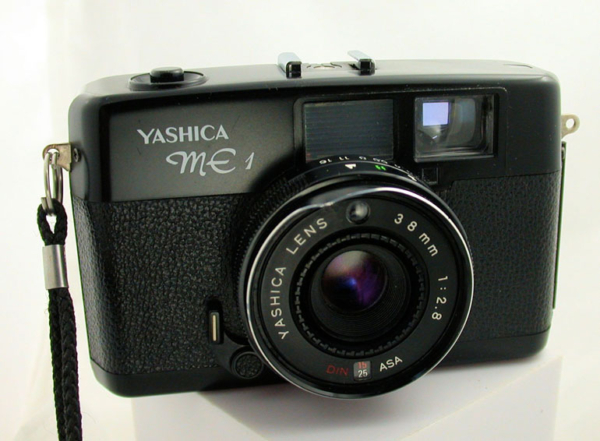 The Yashica ME 1 – The Brazilian Sleeper
Mark O has a talent for capturing great images with some of the less popular grab-and-go cameras, and the Yashica ME 1 fits this description perfectly. Originally released in Japan in 1970 it migrated to Brazil to become the first camera produced by Yashica’s Brazil factory in 1977. The zone-focus, auto-exposure compact camera features a 38mm f/2.8 lens. The top plate is a simple affair with the shutter release and hot-shoe, with the film winding dial and rewind on the bottom. The camera is designed to take a PX675 mercury cell but it runs on a modern LR44 just fine. Just make sure to put the lens cap on when the camera’s not in use as there’s no on/off switch! The Auto-Exposure system is simple to operate - green means go, yellow means you might want a flash, and if it’s red it won’t even fire the shutter. Despite being a compact camera, it fits well in the hand and can easily slip into the pocket. You can get one on eBay for about $40, and it’s a great gift for someone who loves a unique off-beat camera. 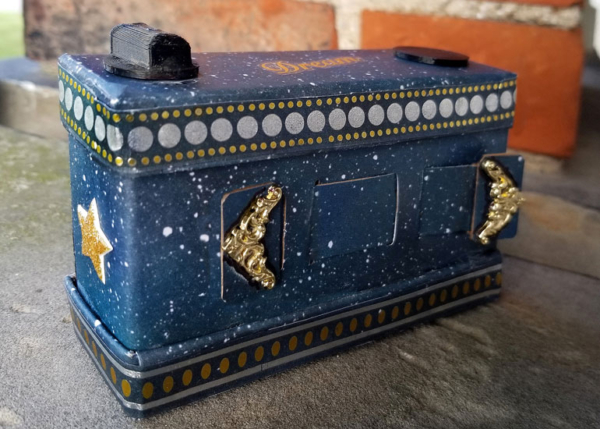 The PinBox!
If you recall episode 197 Robert Hamm of Hamm Camera Company introduced the gang to the PinBox, a pinhole camera that you can build and customize yourself – now available through the FPP Store! The camera is almost all cardboard, with the spool and winding keys in 3D printed plastics that arrive in a flat mailer. You can assemble the camera using the included instruction sheets, but we suggest you watch the video a couple times before starting the construction. Once completed, you can “wrap the camera up” and make it your own – you can even draw all over it! The camera itself can take about 45-60 minutes to build depending on how much additional decoration you do. But the customization doesn’t stop there, you might be able to find a way to mount the camera onto a tripod with a cellphone clip, or a magnetic mount tripod mount or just put a threaded mount into the camera itself. And the results that Leslie got from her camera are amazing! The best part is that the camera takes regular 120 film and shoots on 6x6 exposures -  which is rare according to Mark O and medium format is a far better size for pinhole shooting than 35mm (which most kits are designed around). If the camera gets damaged in any way, you can just recover the 3D-Printed bits and the pinhole itself and simply build a new one! If you’ve never shot pinhole, this camera is a great way to get into the format.  Pick up your PinBox from The FPP!

That’s it for this show, but we’ll be back in a short two weeks. We love to hear from you, simply email us at podcast@filmphotographyproject.com or send a letter to Film Photography Podcast PO Box 264, Fairlawn, NJ, 07410. If you're looking for the latest in FPP news, be sure to sign up for our newsletter (right on our home page), like us on FPP Facebook and join in with the rest of the community through our FPP Flickr Group Forums! But stick around, because Darren Reily has a musical outro for the show!