We’re getting into the dog days for summer, but the gang is all still around the table. Joining Michael Raso today is Mat Marrash, John Fedele, Mark Dalzell, Mark O’Brien, and Leslie Lazenby! On today’s shoe (what shoe!) is the Tynar 16mm, the Super Ikonta 531/16, B&W Reversal Films, Ferrania P30 Book of the Show, Listener Letters and so much more! So grab a cold drink, sit on your porch, and don’t touch that dial! 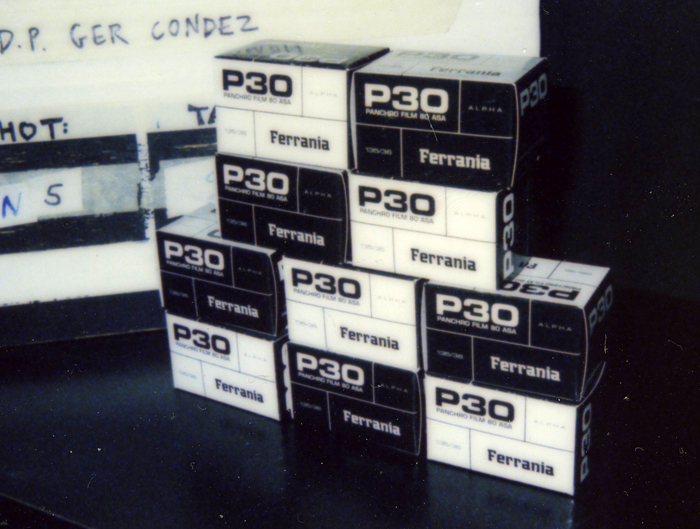 Film Ferrania P30
If you were a part of the Ferrania Kickstarter, you'd remember they’ve been running into plenty of delays in producing their slide film, however, in the interim they put out a wonderful black & white film, P30. The new film stock is based on the original 1960s Ferrania P30, an ISO-80 panchromatic B&W motion picture film. And most of the folks at the FPP have shot the new product; Mat was even involved in the early testing. Mark O’Brien is a fan of the film, having shot his first roll in Toronto back in January and even in dull winter light, the film sang! Rich whites and dark blacks, not to mention a cinematic quality to the images. One of the best parts is that the film lays flat in the scanner, mostly because of the polyester base, it’s more resistant to cupping during drying. And while it’s hard to come by, if you keep an eye on the Ferrania store, you might be able to get your hands on it. If you want to read more, you can check out Mark’s one roll review of P30, or Alex’s review of the film.

Black & White Reversal – Turning your B&W images into SLIDES!
Keeping on the B&W theme, the gears shift from negative film to positive film. While we have talked about reversal processing before through the Dr5 lab, but listener Duke writes in asking about home reversal processing specifically about the Adox Scala 160x, based on the legendary Agfa Scala 200x. Mat explains that in the past, only speciality films such as Scala or Fomapan 100R could be processed as B&W slide films, but as Dr5 has shown you can turn most films into slides. The process can be done at home; you would take the film as before develop it in your favourite developer (D-76 is a good method), then bleach the film. Bleaching removes the silver halide from the base, make sure you clear the bleach from your film before proceeding. Next up, you’re going to have to re-expose the negative to strong tungsten or flash-based light source, don’t use sunlight as that may cause undue fogging. Now, you want to then run it through a second developer something fairly strong (Read Kodak Dektol), then stop and fix. It’s a bit of a rabbit hole Mat explains and can be fairly harsh chemically, as in, one wrong move could result in serious injury or even death if you’re mixing the bleach from scratch, you’re dealing with 98% Sulfuric Acid. If you feel confident enough, you can follow the instructions online at Mr Alvandi's blog or you can buy a pre-made kit, Rollei has on that does ten rolls and works on most films, Photographer’s Formulary has one, but it’s just for TMax films and does four rolls but they ain’t cheap. Of course, if you don’t want to get into this, you can always send your film off to Dr5, you don’t get a fast turnaround, but you get awesome results if you follow their guidelines. 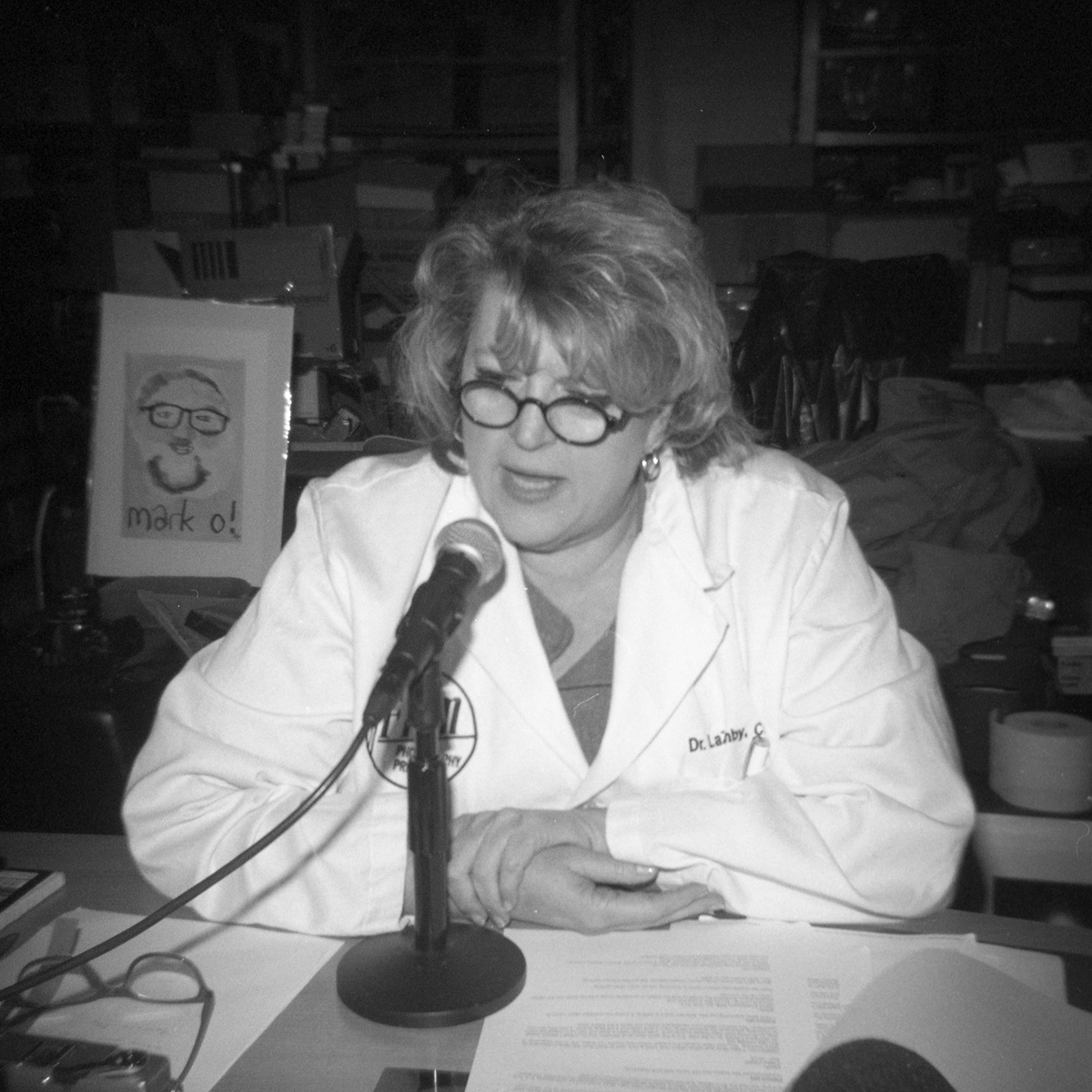 The Doctor Is In
So our latest patient is having some difficulty with their Eastman Double-X, they see more grain than expected and no shadow detail, the film was processed by a commercial lab, and the camera is known to work, and the film is fresh! The light was hard, and contrast shot at high-noon and shot with an orange filter. Well that last bit nailed the problem, the orange filter would increase the contrast to bring out the clouds, it also pushed to shadows even deeper, which is not what the patient wanted. Leslie recommends the use of a Polarizing filter, which would have brought out the clouds without touching everything else. 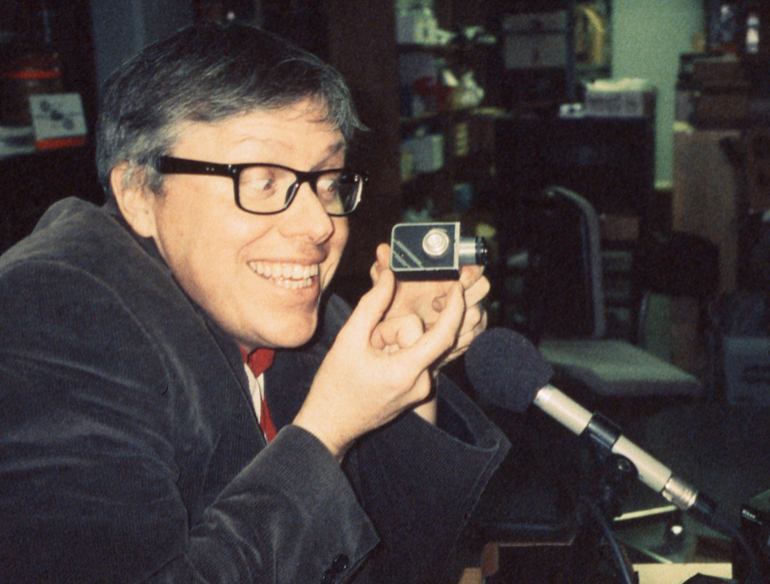 Tynar a 16mm Camera – It may look cool, but it’s not
It may look like a tiny motion picture camera, but the Tynar is a tiny sub-miniature camera, and of course, it is from Mark Dalzell’s collection, and it’s horrible! The Tynar is from 1949 and lasted only a few months. Despite the short production span, the camera was rather common. It shot on 16mm film in a special metal cartridge and produced 14 images per cartridge. You would then send the cartridge, and one dollar and the images were printed, and a new film cartridge sent back to you. It’s a simple point and shoot with a pair of metal view finders, a fixed focus, fixed single shutter speed (1/50”) and an anastigmatic lens with a selectable f/6.3, f/11, and f/16 apertures. The camera is tiny, really tiny, and a terrible machine! And while Mark has gotten images out of the camera, the quality is so bad he doesn’t see the point of even posting them online. They may look cool, but it doesn’t even have that going for them. 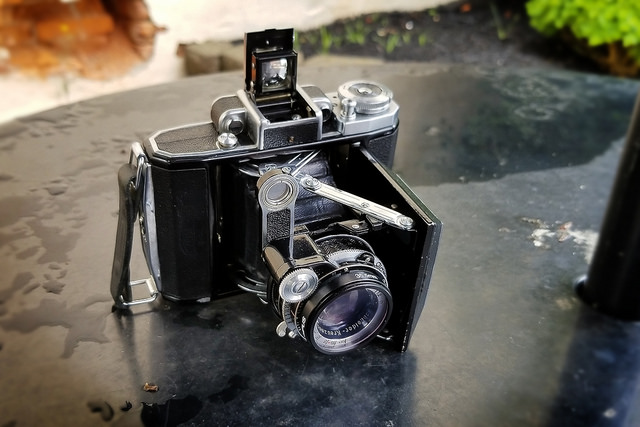 Super Ikonta – A Jewel of a Camera
Leslie has a much better camera than the Tynar to show off, the Zeiss Ikon Super Ikonta 531/16. A folder which shots in the 6x4.5 format and took 120 films. And despite the weight can fit it in your pocket. Produced from 1936-1953, this is a beautiful rangefinder that still holds its value today as the build quality can be equated to that of a Rolls Royce. Leslie’s example is one of the post-war models as it has a Schneider Xenar 75mm f/3.5, some cases have a Zeiss Tessar lens. Pre-War models will have either Tessar or Novar lenses. The coupled rangefinder works with a flip up periscope to help magnify and project the image needed to line up to get the focus. When Leslie got her’s, it had some issues, so she came across zeisscamera.com website and sent it over for a total overhaul of the machine. And when it came back, it was better than new and even had a total history of her particular camera. Leslie’s camera was produced right after the end of world war two as it had both pre-war and post-war leather, a Schneider lens, and was missing a part in the shutter which prevented it from working, the bombing campaign had decimated a common problem with cameras produced right after the war as Germany's industrial capacity. But a new spring was manufactured, and now the camera works perfectly! 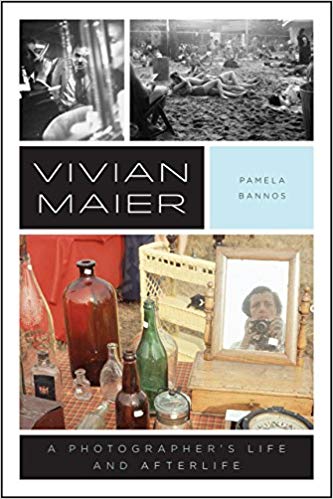 Book of the Show – Vivian Maier
If you were living under a rock in the early 2010s, you might not have known of Vivian Maier. Vivian, a nanny in New York and Chicago in the earlier 1950s moonlighted as a prolific street photographer, but never shared her work. At least until some of her boxes came up for auction after the storage locker fees lapsed. Today Maier is a household name, with multiple books and a couple of documentaries on her are now produced. So on today’s show, Mark O’Brien shares a book that showed off what her life is like, the book, Vivian Maier: A Photographer’s Life & Afterlife by Pamela Bannos. Bannos researched the life story of Vivian to set the record straight on her life and afterlife, to show that Vivian is far from the surprising savant, but instead had some natural skill and talent as well as training. In Mark’s opinion this is one of the best books released about Vivian, now it is mostly text, but well worth the read if you’re interested in a well-researched biography or want an engrossing read!

Well, that’s it for this show, but don’t worry we’ll be back for a super, special July 4th Spectacular in just a few short days!! Until then, be sure to check out our FPP Facebook Page or join in with the community on our FPP Flickr Group! You can also get in touch by email at podcast@filmphotographyproject.com or through the postal service Film Photography Podcast PO Box 264 Fair Lawn NJ 07410. Catch all the latest FPP news and film specials by signing up for our newsletter form right on our home page!