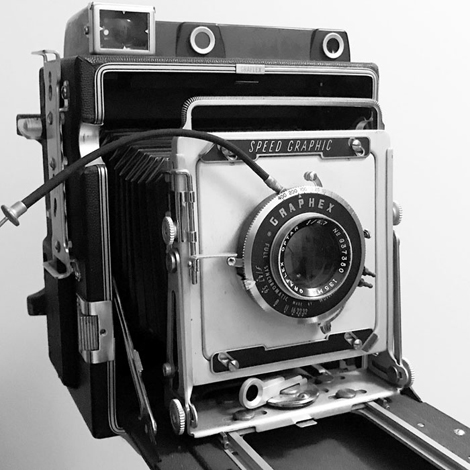 Jumping In has Never Been This Easy – Large Format
We’re sure there are plenty of listeners that have been waiting to pull the trigger and finally jumping into the large format game. Well FPP Listener Chris Barbaree has the perfect solution. Chris kindly sent his mint-condition Graflex Pacemaker Speed Graphic to the FPP to sell on his behalf. Mat continues to explain that this kit has everything you need to get started, a stock Graflex Optar 135mm f/4.7 lens, three film holders (that’s six sheets of film), a cable release, and a box of Arista EDU 200 black and white film. And in true FPP spirit, Michael is throwing in some partly shot boxes of colour film in the form of Kodak Portra and some Fujichrome E-6 film. And the price can’t be beaten, at 600 in change, this is the perfect kit to get yourself started. Just don’t wait too long, we only have one of these for sale. 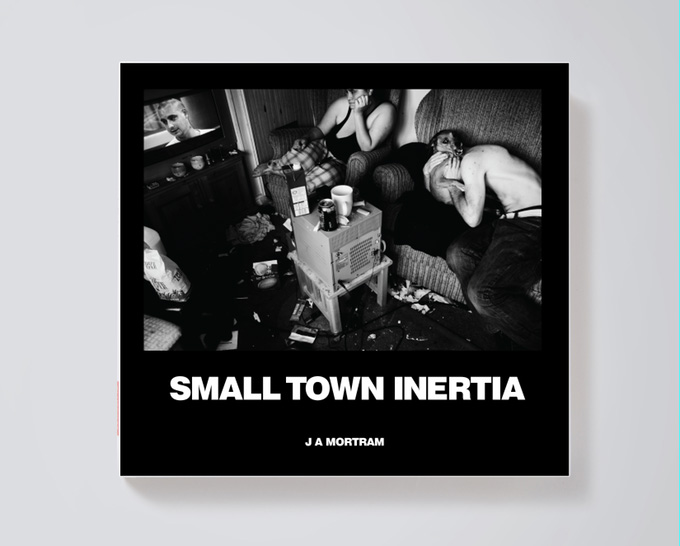 Book of the Show – Small Town Inertia
Mat gives us a quick rundown on a Kickstarter project he backed earlier in the year and now has the finished project in his hand and it has everyone in the studio in awe. A book, titled Small Town Inertia is the brainchild and project of photographer Jim Mortram. It’s a series of portraits and stories of the people he has in his care in small towns throughout England. It’s a true work of photojournalism says Mark, and the print quality is top notch according to Leslie. If you want to get one, you’ll need to act fast, get in touch with Jim through his website smalltowninertia.co.uk and continue to follow his work. 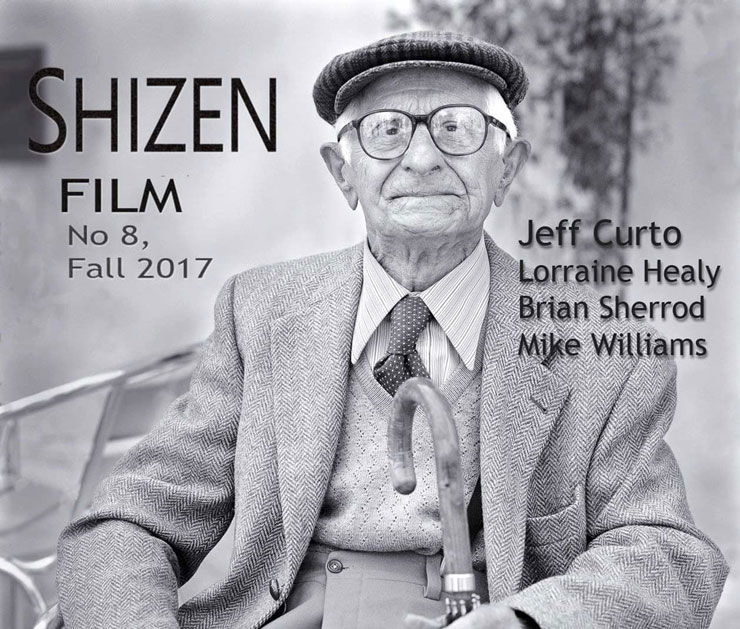 Shizen – A ‘Zine worth a long look
If you’re a long time listener of the FPP you’ve probably heard the name Jim Austen drop much time. He’s our super friend who cruises the Atlantic Seaboard aboard his boat Salty Paws occasionally dropping a donation in a bottle to FPP Headquarters. But what you may not realize is that he curates Leslie’s favourite e-zine called Shizen. The title comes from the Japanese “Primal Desire” and it is a fantastic collection of work from some top-notch photographers. Even our own Mat Marrash has been featured. And the best part about the ‘zine is that it’s 100% free! Every issue leaves Leslie inspired. So why not check it out at Jim’s website shizenezine.weebly.com and be sure to keep an eye out for when Jim is calling for content and consider submitting your work to this publication. 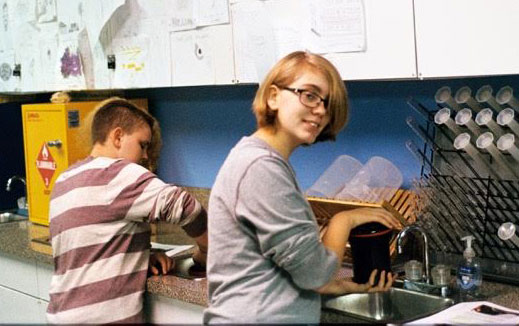 School Donation Program – Start of Term Update
The FPP School Donation program is showing no sign of slowing down! This year we’ve sent cameras all across the United States. From Colorado to Michigan, Ohio to New York State. The whole gang has been working hard to ensure that each school has a fleet of working cameras, lenses, and film to help teach students the art of Photography even when all the school budget it goes to the physical education department. Want to help out? We’re always looking for working cameras to include in our donation program, why not head over to our donation page to see how you can help out! 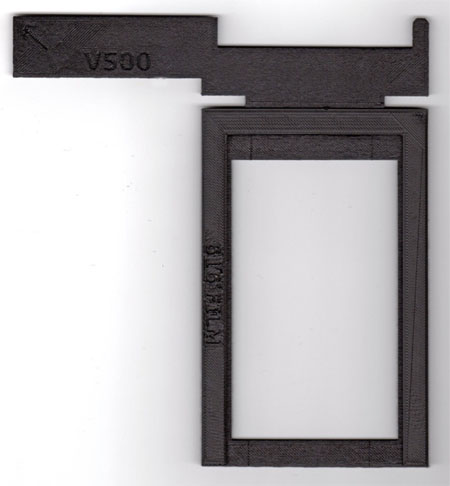 116/616 Update – Scanning
As you heard a few episodes ago, Michael and the FPP gang has been getting into 116/616 format using 65mm motion picture film. Now the biggest issue is scanning this format. Your average Epson V700 doesn’t have film holders wide enough. Now you can go with taping your negatives down onto the scanning bed. But if you haven’t upgraded the glass you’re going to get Newton Rings and possibly have the scans out of focus. Thankfully, the Internet has come to the rescue! While Michael browsed eBay he came across a rather positive thinking company, Negative Solutions. These guys produce custom 3D printed film holders for almost every scanner on the market and for almost every film format, including 65mm. Solid product for a 3D printed item, and at a reasonable price. So if you have invested in our 616/116 Kit, you might think about investing in one of these holders to show off your beautiful work in our Flickr Group!

Bellows Repair
Of course, there are plenty of box cameras that take 116/616 film, but many are folders. And there are plenty of solid folders out there. The trouble with these cameras is that they have a weak spot, the bellows. Leslie has some helpful tips in repairing these beautiful cameras back into working condition. The first thing you need to do is determine how badly the bellows have been damaged, a simple flashlight and a dark room will help with that. You just need a cheap LED flashlight or even your phone will do if the camera is big enough. This, allows you to find out where the damage is. One of the bigger debates online is how to repair these and if you search online you’ll find tonnes of ways of doing it. But Leslie has come up with a tried and true (and not that expensive way) of fixing it. And that way is using Permatex gasket maker in Black, it dries quick and is flexible. Leslie will then use a bit of laser printer toner mixed with water to knock down the gloss. It’s a pretty permanent fix. Of course for bigger jobs, you’ll want a patch kit which you can pick up for only 15$ from Bostick and Sullivan that has a large quantity of Dacron fabric and a sealer solution. Other options that Leslie has tried are using Lamp Black (or Carbon Black) but this can be hard to come by these days. Bill Bessler in Ann Arbor has had luck with Wet and Wild brand nail polish in black, or you can use a fabric glue. Of course, if you have amazing fine motor skills and are of the crafty type you can always make your own replacement bellows.

Kickstarter Radar
What’s on the FPP’s radar for the Kickstarter website? Well there was of late the Lomography Lomo’Instant Automat Square that had wild success (again) and a couple of us bought the product, so what’s next? John Fedele brings up a modern, modular box camera from HAMM Camera down in the southern United States that aims to bring back a modern, 3D Printed version based on the famous Kodak and Agfa boxes. This time with a glass single element 100mm f/5.6 lens and interchangeable sections. While it hasn’t hit the Kickstarter site yet you can get the latest news on their Facebook Page. Mark Dalzell has one that is sure to be a hit among FPP’ers and that’s a 35mm adapter for the Kodak Brownie Hawkeye (Flash). These beautiful 620 cameras are not as out of date as the campaign implies but it does bring a handy 35mm adapter to allow you to shoot 35mm inside these cameras in the traditional square format. Now the campaign isn’t for an actual product but rather the design files that you can take to your local 3D printer (or do it yourself if you have one at home or your school). There are two editions, one that will just expose the usual square and a deluxe that will also expose the sprockets. There are only a few days left to go, so why not head over to kickstarter.com/projects/236226576/hawkeye35-adapter-kit and see if it interests you! 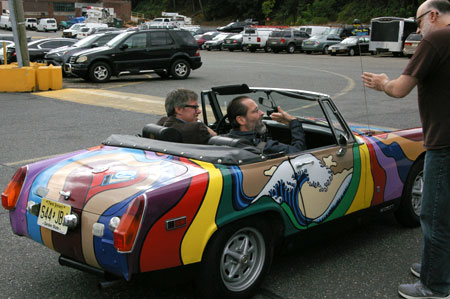 above: Mark Dalzell, John Fedele and Michael Raso setting up a shot for a 16mm film test. Below: Where the Air is Cool and Dark, the 1994 35mm feature film restored by Michael Raso. The film is available to stream on Amazon Prime. 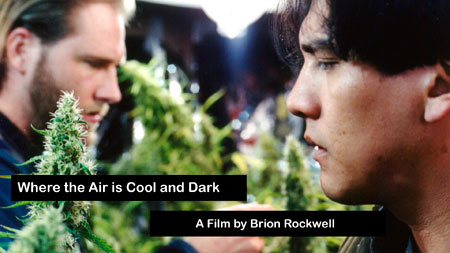 That’s it for this show, but don’t fret we’ll be back in a short two weeks. Until then why not join the conversation over on our official Flickr group? Need a stock up on your film, head over to our store. And if you want to get in touch, we love hearing from you, you can email us at podcast@filmphotographyproject.com or send us an actual letter (or care packages) directly to our Headquarters at Film Photography Podcast PO Box 264 Fair Lawn, NJ 07410. until next time, here’s The Walkabouts with their song Train to Mercy (From the motion picture Where The Air is Cool and Dark.)