Hey out there in Podcast land, things are heating up as summer is right around the corner, so what better way to cool off than a cold can of Mr. Brown Iced Coffee and the Film Photography Podcast! Joining Michael Raso around the table today is Leslie Lazenby, Mat Marrash, Mark Dalzell, and Mark O’Brien. We have a great show for you today! An explosion of cameras including the Revere Eye-Matic EE 127, the Argus A, Kodak Brownie Flashmite 20, and the Folmer & Schwing Auto Graflex. Plus a book of the show, and listener letters! 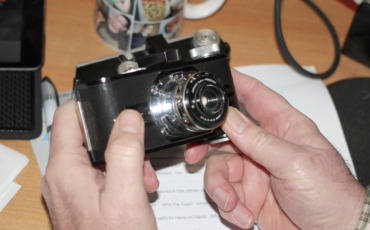 Argus Cameras - An American Icon
Mark O’Brien has an American icon with him today, the Argus A. Despite its simplicity the camera it is an important camera in the history of photography in the United States. It is the camera that popularized the 35mm film format in the USA. The Argus Corporation had its start producing radio, but in the 1930s when the Great Depression was in full swing it made an attempt at breaking into the camera business and manufactured a line of cameras that were the best selling cameras inthe country. Their first camera, the Argus Model A or simply Argus A was released in 1936. A simple 35mm point-and-shoot that has an art deco flare. Despite this simplicity, the camera became hugely popular as it was affordable and close to 12,000 were eventually produced. The lens, while not up to standards of higher end cameras, but the Argus Anastigmat lens only rated as a f/4.5 with two focus positions. An Ilex shutter gave you the speeds of 1/25 to 1/100 of a second and yet it’s a fun camera to shoot with according to Mark, even with its propensity to have the back pop off at inopportune times. Over the course of the next couple decades, Argus would spin off several sub-model variants of the Model A, including the FA which had a close focusing manual lens that went from infinity down to one-and-a-half feet, the A2B that has an extinction meter, the FA with flash contacts. There was even a budget model in the AA that was little better than a box camera. While the lenses aren’t the best, there isn’t much that can go wrong. If you are looking at getting one, Mark recommends either the FA or A2B, and while the price on the used market has gone up, they still run around 30$. If you’re interested in learning more about the Argus Corporation, you can visit the Argus Museum, located in the original headquarters in Ann Arbor, Michigan, visit their website for more details.

The Kodak Flashmite 20 (620 Camera)
Michael Raso has received many cameras from his Aunt Linda, and the most recent one is the Kodak Brownie Flashmite 20. While nothing more than one of many of the bakelite box cameras of the mid-twentieth century the Flashmite 20 is a favourite of Michael’s. Featuring a Kodet Lens and taking 620 film, it shoots 6x6 format. The Flashmite 20 is scaled up from the 127 Starmite camera and has a built-in flash unit that takes the AG-1 flash bulb (AG stands for All Glass). Sadly the shutter on the camera jammed up, but a quick fix under the care of Mark Dalzell loosened it right up with the careful application of oil to the simple shutter. It’s a camera that Michael has a nostalgic attachment to as it reminds him of his childhood and produces soft dreamy images. Thanks to The Film Photography Project, 620 film is now readily available. Michael Raso regularly stocks this camera in the FPP On-Line Store. He personally checks out every camera sold! 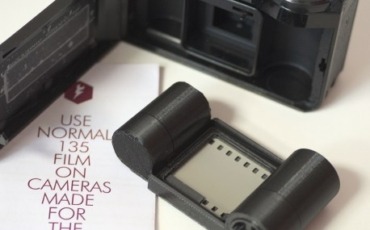 Return of 126?
Well not really, but another format that’s close to Michael’s heart is 126. This drop in cartridge format was again introduced by Kodak and ceased production in 1996, though Ferrania continued production into 2007. Now, the film inside these cartridges is 35mm, but with fewer sprockets, so often you can crack an original cartridge and reload them with 35mm, the trouble comes when advancing the film, often the camera won’t advance the film far enough because of the multiple sprockets. A company in Italy, Camerhack has come up with a solution. They have a reloadable 126 cartridge that you can spool 35mm into, it has a mask to help override the sprocket advance, plus you get beautiful sprocket holes in all your images. The device is known as Fakmatic, and you can pick it up for 22 Euros (25 USD). How does it perform? Stay tuned as Mark Dalzell picked one up for testing.

Book of the Week - Paris through Young Eyes
While the city of Paris, France is often well photographed, Mark O’Brien has a book that has a unique view of the famous city. The book-of-the-week is Picture Paris: Landmarks of a New Generation. Mark was instantly smitten by the images in the book, and more so what made it unique, the photographs in volume were captured by Parisian middle-school students.  The students were provided with point-and-shoot cameras, all the film needed and a bit of instruction and then set loose to capture their city the way they see it. And while there are plenty of iconic Paris locations in the book it is a fresh take. The book was published in 1998 and still available both new and used. 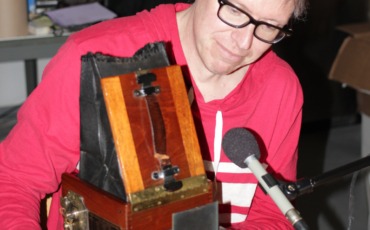 A Giant in the Field – The Folmer & Schwing Speed Graflex
Mark Dalzell has a giant camera on the table, and what a camera it is, and the camera that gave us the iconic look of moving cars in cartoons, where when they’re moving you have the wheels drawn as ovals instead of circles. That camera is the Folmer & Schwing Auto Graflex. This is a big camera, and it dates to approximately 1909. The camera came into Mark’s hands in rough shape, but he soon worked on and restored this brass and mahogany beauty complete with fixing up the cloth shutter that made the camera iconic. He also hacked it so that it now fits and uses a standard 4x5 film holder. Unlike previous Graflex cameras, the Auto Graflex uses a new Simplified Cloth Focal Plane shutter, the shutter used a variable width slit that scanned the film to expose it, this method as Mat says, is called a rolling shutter, and it’s this method that gives the wheels that oval shape when captured in motion. Mat added, some digital cameras have cheaped out and use the same method on their shutters. The shutter speed is controlled by two methods, by adjusting the width of the slit and the tension on the spring. Adjusting the two by using the supplied chart can provide shutter speeds from 1/10 of a second to a blistering 1/1000 of a second. Now you’d expect this to all come from a view or press camera but the Auto Graflex is a full out SLR, complete with a mirror, but it doesn’t have a traditional prism as you would expect on an SLR, but rather a viewing chimney. Of course, the camera produces some beautiful dreamy images from the Bausch & Lomb Tessar lens. For the initial tests, Mark brought the beast to a rather appropriate event, The Race of Gentlemen. You can check out some of Mark’s work on his Flickr page. Another photographer recently took a similar camera out to Formula One races. 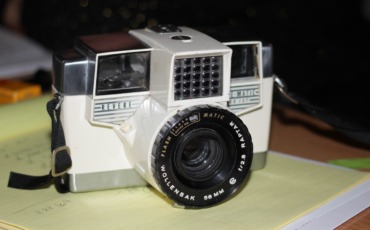 Seeing with the Electric-Eye- Revere Eye-Matic EE 127
Leslie has one more camera for the show. While most people would think of motion picture cameras from the name Revere, in the 1950s Revere began to slide into still photography.  After their stereo cameras, they released a 127 rangefinder. This is an aluminum bodied camera with a lovely baked on white enamel finish. Released in 1958 the Revere Eye-Matic EE 127 uses a selenium meter to run the auto-exposure system, while the camera has only a single fixed shutter speed, the aperture is automatically controlled. By this point, Leslie explained Revere had also gained ownership of the Wollensak company allowing them to include a Wollensak 58mm f/2.8 Raptar lens on the camera as well. For flash work, the camera had a great little flashmatic unit. All you need to do is set the guide number, and the camera will then adjust the aperture to compensate for distance. The best part is that this camera is a proper rangefinder with a big bright viewfinder. The camera uses 127 film which can be difficult but not impossible to find. Currently available is a BW 127 film called Rerapan which is a beautiful ISO-100 film that you can pickup right here at The FPP on-line store. Doing home developing with 127, your Patterson reels have a 127 setting, tucked in between 35mm and 120. 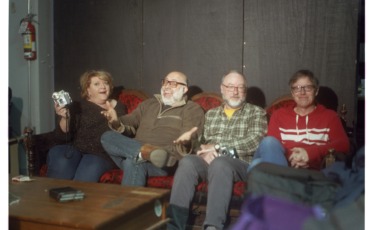 above: Leslie, Mike, Mark O and Mark D shot by Mat on the 1909 Folmer and Schwing Speed Graflex on Cinestill 800T 4x5 film!

That’s it for this show! If you want to learn about all the news and specials from the FPP, you can sign up for our email newsletter (subscribe on the right side of this page). You can also share your film photos and join in the discussion on our Flickr group or you can drop us a line by post: Film Photography Podcast PO Box 264 Fair Lawn, NJ 07410
e-mail us: podcast@filmphotographyproject.com. And we’ll see you in a short two weeks!