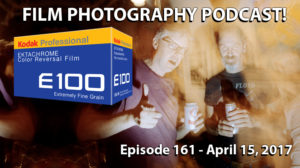 Joining Michael Raso in the studio today is John Fedele, Leslie Lazenby, and Mark Dalzell! What show today with lots of listener letters, the Pentax MV, the return of Kodak Ektachrome, and so much more! So grab yourself a Mr. Brown Iced Coffee and stay tuned!

The Return of Kodak Ektachrome - You probably have heard the awesome news that Kodak is in the process of reviving its slide film, Ektachrome! That’s right, later this year Kodak will be releasing a new formulation of Ektachrome E100. It is right in line with the release of their new Super 8 camera, but this film will be also available for still photography! Read the Kodak Alaris press release here.

Fuji Instax Square - Fujifilm, which despite discontinuing their FP-100 and FP-3000 films recently, they’re riding high on their Instax line of films and are still planning the release of a square format version. This film won’t be the same dimensions of the classic Polaroid format, probably to avoid consumers trying to put it into classic Polaroid cameras. The film size will sit between Fuji’s Instax Mini and Instax wide formats.

Mr Brown 35mm BW Film - Have you had a chance to try out FPP’s limited Mr. Brown low ISO film? Well if you haven’t now is the time, we’re down to about thirty rolls of this mystery film that came to the FPP by accident! Produced by Svema, this black & white film has an ISO/ASA rating of 6, but produces wonderfully dreamy images! The film is paper thin being on a polyester base like most Svema films. Responds well to D-76, HC-110, and Xtol! Head over to the all-new FPP On-Line Store and pick up some rolls before they’re gone!

Listener Letters - Nick writes into the FPP with an important question; he wants to open up a community darkroom in Omaha but also has a year left before completing his Associates Degree in Photography. He wants our input. Leslie speaks first with sound advice, finish the degree first, while still planning out how the community darkroom works, and then once the schooling is done, then open the space. Michael agrees, take care of yourself first. He also suggests looking into a local public building like a library to see if they can donate space for free at first to get the setup off the ground. Of course community darkrooms are starting to pop up in many cities, Midwest Photo in Columbus, Ohio just opened up their new public darkroom under the watchful guidance of our own Mat Marash and another listener from Ontario writes in to talk about the Latow Photographic Guild’s community darkroom in Burlington, Ontario being the only one in the Golden Horseshoe area of Southern Ontario.

ECN-2?! FPP Superfriend and mad scientist August Kelm has been working hard in his lab, and he sent in his latest experiment, a home brew ECN-2 chemistry kit! ECN-2 is the name of the process used to process Kodak motion picture film (Kodak Vision 3 film). This film is pretty popular among the FPP gang but has one issue that makes it a little hard to handle - the remjet layer that protects the film when running through cameras at high speed prevents the film from being processed standard C-41. The remjet layer (a black carbon base) gums up C-41 automated machines and causes the lab to put a bounty on your head inser laugh track). Of course, it’s easy to process at home with the FPP C-41 kit, and the remjet layer comes off with warm water and your fingers. This wasn’t enough for August who wanted to try and produce his ECN-2 processing in smaller amounts for home users rather than commercial motion picture labs. And he succeeded! The biggest difference between his kit and the C-41 kit is that there are a few more steps, there’s a baking soda based bath to help knock loose that remjet layer and the blix stage has been separated into a Bleach stage and Fix stage. Leslie comments that you can easily use regular B&W Fixer. While she doesn’t think she’ll get any better quality with the ECN-2 Kit, it’ll be fun to play with anyway!

Pentax MV - Mark Dalzell’s journey through Pentax’s M series of cameras with the Pentax MV. This 1979 compact SLR is a stripped down version of the Pentax ME Super. And when he says stripped down, he means it. This is a bare-bones semi-automatic aperture priority camera. There are no bells and whistles, besides the extra flash contact for proprietary Pentax flashes. You’re pretty much stuck with aperture priority with only a 1/100th of a second manual override and bulb mode. No feedback in the viewfinder. This proved to be a bad move for Pentax, and the camera only lasted on the market for a year being replaced in 1980 with the MV1. But that shouldn’t stop you, this is a wonderfully compact camera and is fully compatible with manual focus Pentax K-Mount lenses but if you use the Pentax-M series of lenses they make the camera pocketable without any trouble!

FPP Listener and recent retiree and film convert Robert write in with a question about developing film. Specifically, film that doesn’t have a lot of documentation on developing times. He wants to know how one would start with developing such film, what should he adjust to the film’s speed, agitation, is there a specific developer. Leslie steps in with some ideas. She recommends sticking with the recommended speed of the film that is the Box Speed, keeping your agitation during development standard (constant for the first minute, then 10 seconds every following minute). For the developer go with one that you’re familiar with, because you can be better able to gage a reasonable result. Then start running clip tests. Shoot a roll and then in a darkroom or change bag, load a short amount of the film onto the reel, and start developing. Then adjust the time in short amounts (1 minute to 30 seconds up or down) until you get a result you like! And the most important step is once you have a recipe, share it online!

That’s it for this show, but we’ll be back in a short two weeks! Until then feel free to write to us by post: Film Photography Podcast PO Box 264 Fair Lawn, NJ 07410 or email: podcast@filmphotographyproject.com.

You can also check out the discussion over on our FPP Flickr Group and take a chance to browse through the image pool as well!