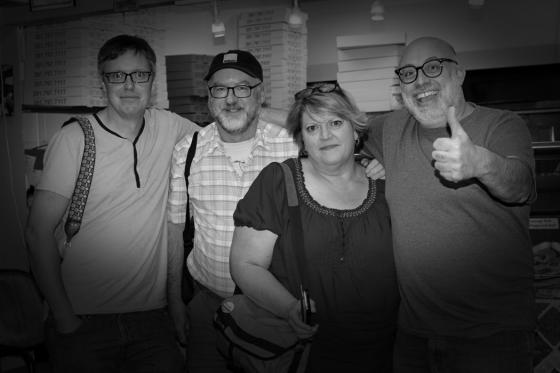 It’s the internet radio show for people who are obsessed with all things film photography!

In the studio today joining Michael Raso is Leslie Lazenby, Mark O’Brien, and Mark Dalzell! We have a great show in store for you today! Autofocus 35mm SLRs, Voitlander Vito, Mr. Brown Mystery 35mm Film, Listener Letters, Kodak Xtol, Filmmaking, an update from Film Ferrania, and so much more! 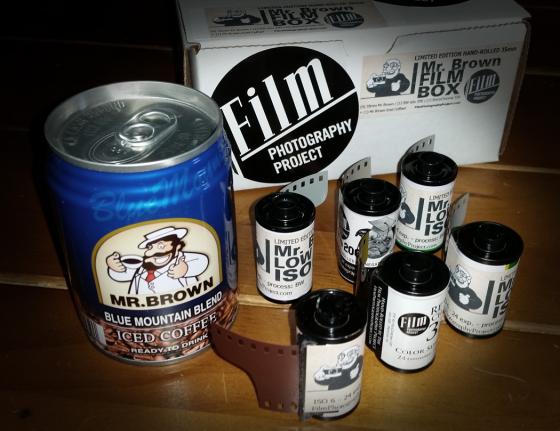 Mr Brown and Mr Brown Film! Anyone who is a fan of the FPP knows that our usual drink of choice is Mr. Brown Iced Coffee. But in a recent FPP purchase - miles of a mystery film arrived at FPP HQ, and it wasn’t what Michael was expecting. So what do we know about this mystery film? Thanks to Leslie we know it’s an ISO/ASA-6 black & white panchromatic film. It’s not high-contrast but it’s snappy with smooth grain and sharp edges. So what to call this film, well Mr. Brown of course! The film responds well in Kodak Xtol, HC-110, and D-76. And for a limited two weeks you can pick it up in the FPP store for only 2,99$ a roll! For FPPers who want to try the Mr Brown Film AND some Mr Brown Iced Coffee - pick up the Mr Brown Film / Iced Coffee Gift Box! 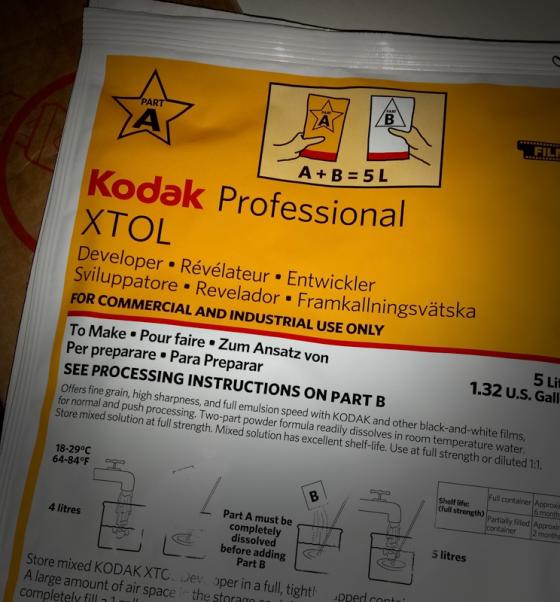 Kodak Xtol BW Developer - Speaking of Xtol, this is Leslie’s go-to developer! It’s the newest developer to come from our friends at Kodak. It’s an ascorbic acid (Vitamin C) developer so it’s not as toxic as say HC-110 or D-76, you mix it up from a two-part powder and a packet makes 5 liters of stock solution. Being a stock solution you can use it in two ways, with just stock developer you can reuse it for about 12 rolls or sheets of film, or you can mix up a diluted working solution that is good for a single use. The common dilutions for Xtol are 1:1 (1 part stock to 1 part water), also 1:2 and 1:3. Leslie uses it for most films, but does warn that it has about a six month shelf life, and when it dies, there is no warning. To extend the life, once it’s mixed up, Leslie divides it up into smaller 1 liter containers. A quick tip, if you’re reusing clear bottles, use a matte black paint to light-proof the bottles, just use a small strip of tape to mask out a section so you can see the volume left! And you can pick up Xtol plus everything you need to start developing right here in the FPP store! 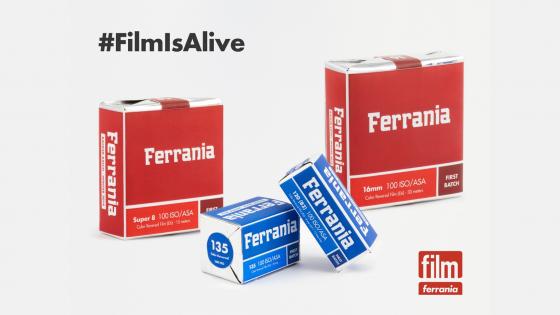 Film Ferrania - So what’s the news from Italy? Mark O’Brien fills us in. After their successful Kickstarter, our friends at Film Ferrania have hit several major snags in their goal to reintroduce Ferrania E-6 film. Mostly in regards to safety and infrastructure changes. But the good news is that they’re on track to begin production soon! They have a working coater and have made some test runs and recently their century-old slitter was installed and is working as well! So we’re all pretty excited to see the film start rolling off the lines. 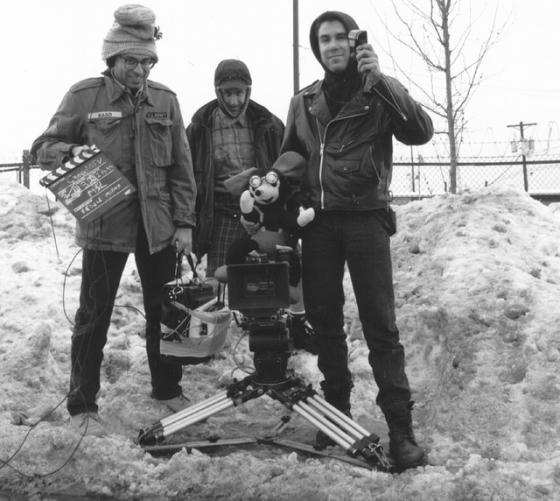 Filmmaking 101 - What Michael is really excited about is that Ferrania will be producing motion picture film! That’s right E-6 Super 8 and 16mm film. As anyone who is a fan of the show knows, Michael is a filmmaker (pix above:Michael & John Fedele making movies in 1992!) In the days before programs like Adobe Premiere or Avid and similar non-linear editing he would spend hours manually editing film. Hours, even Days would be spent surrounded by strips of films sorted by scene, camera, angle, hanging from nails and hooks while he spliced and taped his creation together. Back in the day, there was no YouTube so he would show up to parties with a projector! There are still many who practice the fine art of 8mm and 16mm filmmaking. In fact a company, Mono No Aware still promotes and provides the equipment and film to those who love producing movies in a traditional manner! 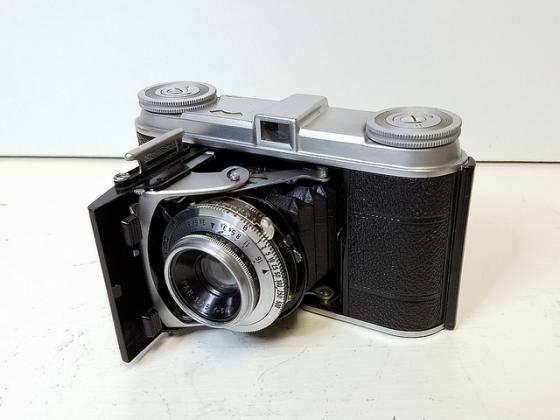 Voitlander Vito - Voitlander cameras keep on falling into Mark Dalzell’s lap and his most recent one is the Voitlander Vito. The original Vito was produced between 1939 and 1940 then again from 1947-1950. The camera was originally designed to shoot 828 film but a quick modification before release changed it to a sprocket-less 35mm film. You can shoot regular 35mm film in the camera, but don’t expect sprocket-hole photography as the frame was smaller than the full width of the film stock. The example Mark has is a post-war model, so the 50mm f/3.5 Skopar lens lacks the built in folding yellow filter. But that doesn’t detract from the camera, Mark finds it easy to shoot with and it’s a great compact folder that fits in the pocket and quick opens up to shoot with! 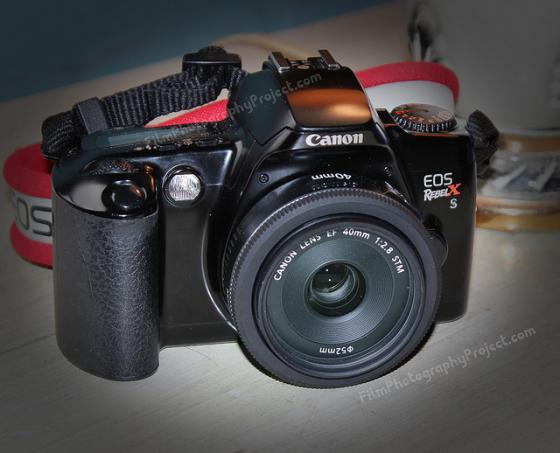 Auto-Focus 35mm SLR Cameras - While many feel that when they start shooting film they need to rock it "old school" and get an old manual focus mechanical camera. While that’s a great idea, for many film can be scary and those old cameras can be unfamiliar if you’re used to your digital SLR. Well, Mark O’Brien suggests looking at the autofocus SLRs of the late 1980s and 1990s through to 2000s. Often these cameras will work with your existing lenses (just watch out that your lenses support ‘full frame’ rather than crop sensors). The Nikon F, Pentax K, and Minolta/Sony A mounts are the same on the 35mm cameras! So what are some good options? Well from the Nikon line, Mark O’Brien suggests the N90, N80, or N65 (F90, F80, F65) these are great inexpensive options that look and feel like most consumer level dSLRs. If your pockets are a little deeper the F100 or F5 won’t steer you wrong either. He does suggest avoiding the N70 (F70).  From Michael - the Canon guy - , he loves most of the EOS line of cameras the Rebel Xs is a good one to start off with but avoid the Rebel S. From Leslie, the Minolta Maxxum 600si and the Maxxum 7 are solid choices. These are great cameras to bring along to family gatherings where you might have to hand it off to a family member and since they can be fully automated it’s not as scary! Plus these days since so many were made, they’re easy on the pocketbook! 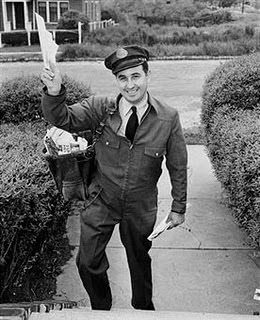 Have something to add, shoot us a line by email: podcast@filmphotographyproject.com or by post:
Film Photography Podcast PO Box 264 Fair Lawn, NJ 07410.
Join in the conversation in our FPP Flickr Group or on the forums. Don’t forget to check out our FPP Store for all your film photography needs and we’ll be back in a short two weeks with more show!