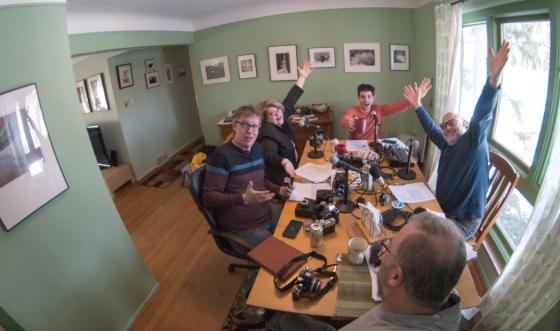 Community Darkroom at MPEX! First up the big news from Columbus is that Midwest Photo Exchange is moving!! They are relocating this summer to a much bigger building on Silver Drive just off I-71 so they're staying in the Clintonville Neighborhood of Columbus, Ohio but will have lots more space (both inside and outside the shop). And best of all there's going to be a public (rentable) darkroom! They're going to remain at their N. High Street location for a bit longer and aim to have the new shop ready to go by July! Keep an eye on their website mpex.com for more details!

CineStill! Cinestill is back! If you remember their first attempt to bring 120 sized Cinestill film flopped on Kickstarter, but that didn't stop them. Turning to Indie Go Go, they managed to raise enough funds to not only have 120 size Cinestill film but 4x5 as well! That's right you soon will be able to shoot the same Cinestill film in both Medium and Large Format. But what is Cinestill film, well it is the same Kodak Motion picture film, Vision3 that many of the biggest films of the year was shot on. But the only difference is that Cinestill has removed the remjet coating on the back allowing it to be processed easily by any lab that develops C-41 film or you can do it yourself without having to have a step to clean off the remjet layer.

Process your own Color Films! Speaking of processing at home, did you know that the FPP Store has everything you need to develop your own Black & White, C-41, and E-6 films at home! That's right from the darkbag, Accessories, Tanks, and Chemisty the FPP store is the one stop shop. And this month we have a special on colour, you can get our C-41 Kit with two rolls of Svema 125 colour film or an E-6 kit with two rolls of Retrochrome and Slide film mounts! Haven't done colour yourself before, don't be scared, it's actually really easy!

Jimages New Mag! FPP Super Friend Jim "Jimages" Austin has been hard at work and now has his very own quarterly photography art magazine. Titled Shizen you can download the first issue free and keep an eye on his website jimages.com to keep tabs on when the newest edition will be available!

So what is Film Washi? Well they are the world's smallest film manufacture, and they produce a really unique film. The film emulation is coated on traditional Japanese Washi paper, called Type W, this film is based on the idea of the Calotype, invited by William Henry Fox Talbot. The film is orthochromatic and rated at ISO-25 The film is avaliable in multiple formats, 35mm, 120/620, 4x5,8x10, and even custom sizes. Leslie has been testing out this film with some great successes, and lots of fun. The film loads just fine into most cameras but when it comes to processing you need to do this completely by hand using paper developers (Dektol, PQ Universal, or Eukobrom) and in trays because it is paper based, not polyester or acetate so you have to be careful, but you can process it using a safelight so you have some help along the way. This film not your speed, there's penty of other options of traditional colour or B&W films avalible from Film Washi, you can check it out at: lomig.fr!

Film Bergger! Donker Dave has also turned Mat onto a new film! Bergger Pancro 400 is an ISO-400 Panchromatic B&W film that is very similar to Ilford HP5! In fact in some of Mat's tests the film actually performs a little better than HP5. He's used both his standard ISO-200 in Pyrocat-HD and the standard times from the datasheet. And the best part is that the film prints like a dream both enlarged and contact. It's available through the Bergger website or for us in North American B&H Photo and can be had in both 35mm and Sheet Film formats.

And that's it for our show today but we'll be back in a short two weeks. Until then we'd love to hear from you, you can email us, podcast@filmphotographyproject.com or by regular mail: Film Photography Podcast PO Box 264, Fair Lawn, NJ, 07410, USA. You can also join in the discussions on our Flickr Group or on the site Forums!