The internet radio show for people who love to shoot film! Black and White Developer Basics – What chemistry to use for your home developing! 1933 Korell Camera, Book of the Month and lots more!!

The weather’s starting to heat up so grab yourself a Mr. Brown on Ice and cool off with Michael Raso, Mat Marash, Leslie Lazenby, and Mark Dalzell. Topics on the table today include the Korelle Camera, 126 Film, Book of the Month (this time not from Mat), Black & White film developers, listener letters, and lots more! 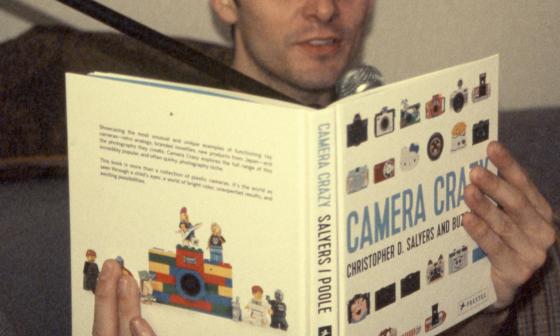 Kicking the show off Leslie has a new way to feed her GAS (Gear Acquisition Syndrome) in the form of a book. Titled Camera Crazy a recent publication covers the rise of toy and novelty cameras stretching all the way to the original Kodak Brownie No. 2 to the modern cameras coming out of Lomography and even toy digital cameras (like the Gameboy Camera). Leslie’s already gotten a camera found in the book the Mick-A-Matic, a 126 camera from 1971 that is shaped like Mickey Mouse. 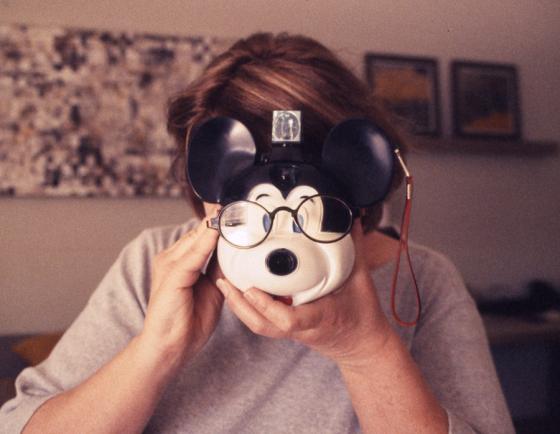 Even Mat found a Dragonball Z Spaceship camera (35mm) that he’s seriously tempted to get. The book itself is a great resource for anyone who is big into the toy camera market as each camera has the full specifications along with images taken with them. It is available through Amazon and is well worth the money. Speaking of toy cameras, listener Ed Keer sent in some wacky toy cameras that look like juice boxes. 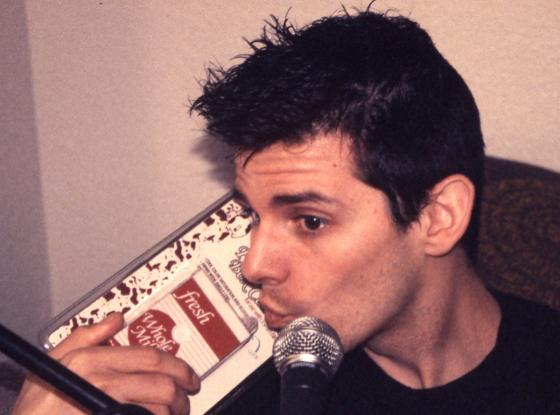 Hype Juice Box cameras feature a 28mm lens and are best used with ISO-400 or ISO-800 film. Mat (sipping one above) says they make great stocking stuffers or gifts, or even to get kids into photography. The cameras themselves produce soft heavily vignetted images but are super fun. They work great with the cheaper drugstore film like Fuji Superia and Kodak Max and Gold. 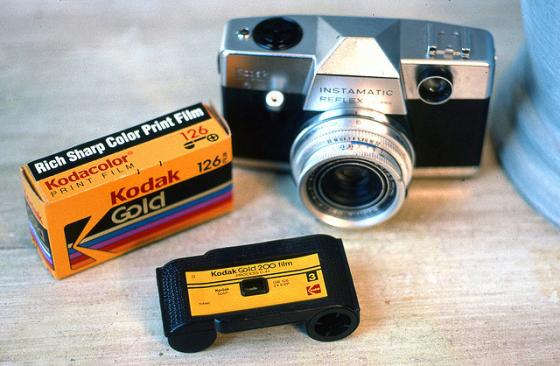 It’s our 126th show (what show) so it only makes sense that we talk about 126 film. This cartridge film was first released by Kodak in 1963 and used in their Instamatic line. Aimed at the consumer market due to the drop in loading. The film was fairly similar to 35mm but was only a single sprocket per frame and produced a 26mm square image. While you can’t get the film fresh anymore as it was discontinued in 2008, you can however load 35mm into an old 126 cartridge, in fact this was discussed way back in our very first show when Michael discovered a YouTube video on the subject. It was also brought up more recently in show 121. If you do want to get into 126 photography some of the better cameras to pickup are the Kodak Instamatic 100 and 500 models, or the Keystone Auto-Instant 125X or Imperial Magimatic X50. But if you don’t want to spend money, the gang’s pretty sure that you can find one in your parents or grandparents basement as they were pretty popular. 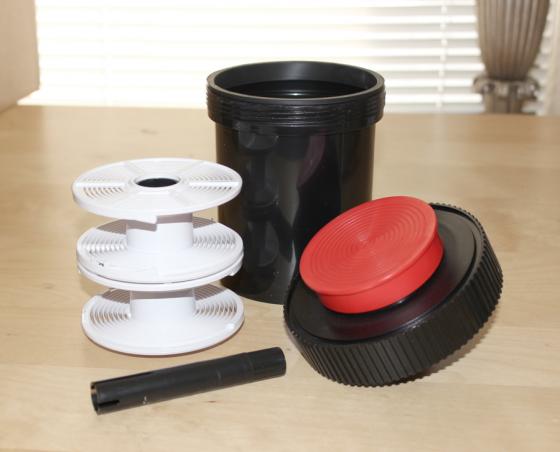 The gang’s going a bit Walter White, as the big question is what chemistry can you use to develop black and white film. Michael is a big fan of Kodak D-76, (or the smaller 1-Liter sized FPP 76) this is a basic film developer that comes in powder form that you mix up in 1 liter or 1 gallon sizes, then use in either stock form or dilute 1 part stock and 1 part water. If he needs something a little more mellow he’ll turn to homebrewed Caffenol Concoction, a developer based on instant coffee and is pretty customizable, or Kodak Technodol (sadly no longer made new) or a clone of the same developer called TD-3 (available at The FPP!), a liquid developer that you mix with water to create a one-time use developer working solution. Leslie on the other hand keeps four developers usually on hand, her go-to is Kodak Xtol, again a powder developer you can use stock or diluted one-to-one, which produces good consistent image quality with fine grain and works well for pushing the film beyond the box speed. The trouble is that you can only mix it up 5 liters at a time so storage can be an issue (Alex uses a 5L plastic gas can to keep his Xtol in). Rodinal is the next developer on Leslie’s list, this is one of the oldest commercial developers out there, while you can still find old bottles of Rodinal (they should still be good), today it’s known as Agfa R09 OneShot, Adox Adonal, or Blazinal depending on where you live. This is a liquid developer you mix with water at various dilutions such as 1 part developer to fifty parts water or lower. Produces sharp images but you do get a more noticeable grain. This developer also works great at 1 to 100 or 1 to 200 dilutions for stand or semi-stand developing. Another liquid developer is Kodak HC-110 (or the smaller sized FPP 110) this is an interesting developer as you can mix your dilutions (the famous alphabet dilutions) from the syrup, or mix the syrup to a stock solution and dilute from there. For more on the dilutions, check out the Unofficial Resource page. It’s a great developer for Kodak Technical Pan or old film as it keeps the age fog down. The final developer is Leslie’s magic bullet, a two-step developer called Diafine. It’s not cheap, but as long as you treat it right and don’t cross-contaminate, it’ll last you a good two years. Another draw of the developer is that it’s great on all films, pushed, pulled, and off-metered. A couple things you have to remember is not to pre-wash your film and agitate it gently, if you have a Patterson tank use the stir stick function. You use both developers one at a time, each time having it in the tank for 3-4 minutes, then pouring the developers back into the bottles. Then stop, fix, and wash as normal…and this works on all black & white films. Mat on the other hand just uses one developer, Pyrocat-HD (meow). This is another developer based on an old formula, and uses pyrocatechin, and it does leave a stain on the negative. The developer is great for preserving both highlight and shadow detail, but does make scans and prints a little flat so you will need to boost the contrast. It is mostly used by folks for large format photography, but you can use it with medium format and 35mm as well, but as Mat says, it’s not that great with 35mm. You also have to watch yourself as the developer is pretty toxic. The gang agrees though that if you’re just starting out D-76 (or Ilford’s ID-11) is the best place to start for cost and ease of use. 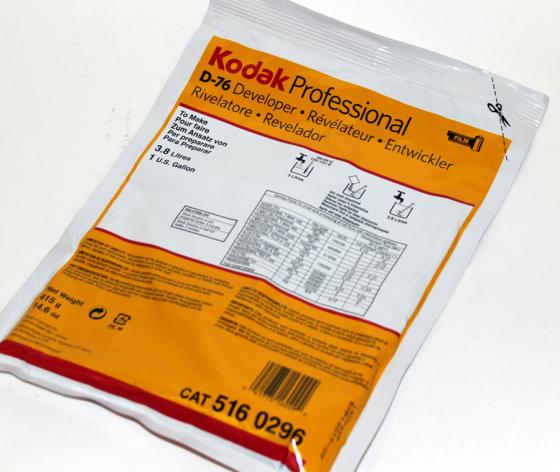 Mark pops in for a brief segment about a recent addition to his collection, a 1933 Kochmann Korelle camera. This (pictured below) is a folding medium format camera that uses 120 film and shoots 6x4.5cm image. There was also a 6x6 model as well. The camera does work, aside from a light leak in the bellows and produces a good, but soft image. Very 1930s when it comes to shooting B&W film in it. There isn’t much in the way of information online about the camera, but still a good buy if you come across one. 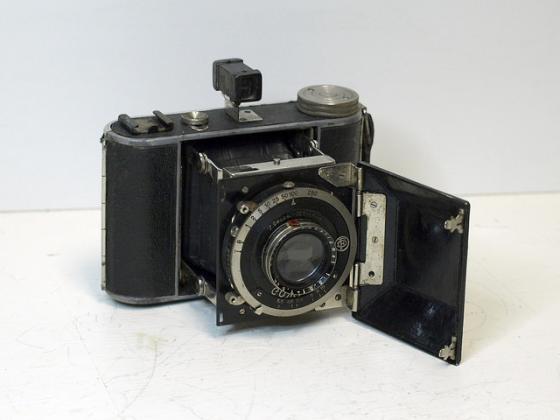 Mat’s also come into a neat little device from Charles R Lawson from Highlander Studio in Virginia, a Kinotronic Anti-Static Vac. This neat little device basically removes that annoying dust from 35mm and medium format film strips, and ionizes the film to repel dust, so that when you scan it you don’t have to spend hours cleaning it up on Photoshop. It’s great for people who live in dusty environments.

That’s it for this show, but we’ll be back in two short weeks! Don’t forget that if you have old film, or a (working) old film camera that you’re just not using anymore you can always donate it to the FPP. Our cameras are used for several projects to support other photographic endeavors around the world. Also if you have any questions don’t hesitate to email us (podcast@filmphotographyproject.com), or post them to our forums or flickr group. 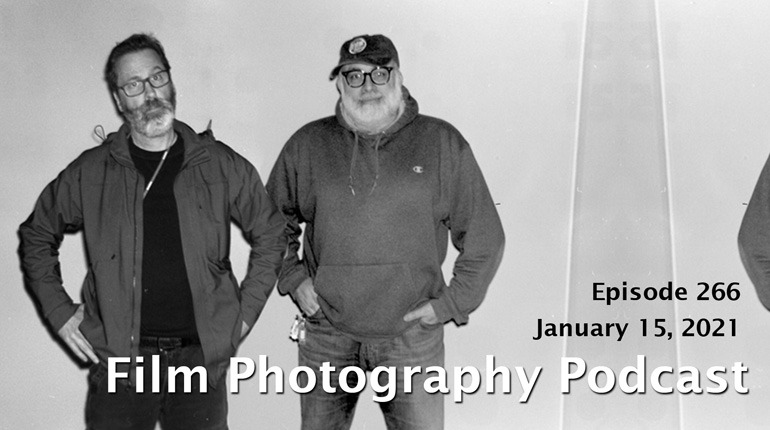