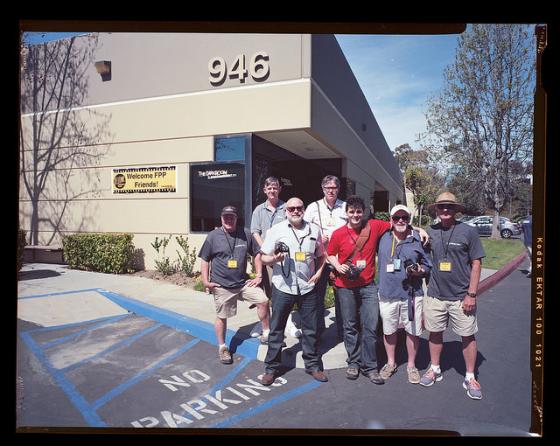 
The workshop was a blast! From meeting all our fans both new and old at the workshop to the food, film and camera giveaways and an every flowing stream of Mister Brown Iced Coffee!

Mat catches up with long time listener Brandon Nedwek who flew in all the way from the cold snowy east coast! While on the lab tour of The Darkroom Brandon came across some of the film that he had shipped for processing - how’s that timing!

Another long time contributor Brian Moore had his trusty XA3 and  familiar voice to the podcast, Mister Nikon himself, Rick Paul showed off his trusty Nikon F5 which can double as a personal defense weapon! Derek Smith who is new to both the podcast and film photography was loving it with his nice little Yashica rangefinder recently refurbished by Russ at camerarefurb.com! 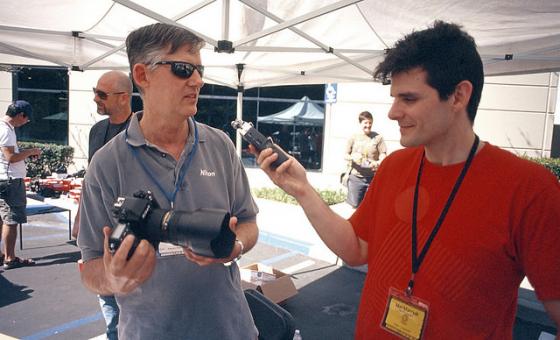 Mat next meets up with the forty year veteran employee of the Darkroom AJ Summa who is their black & white expert. From figuring out what film is sent out to dealing with the old found films sent in, AJ is the one that handles it all.  He also works with making silver prints from digital files in cooperation with Ilford.


One of the big draws to this year’s Walking Workshop was the tour of the facilities at The Darkroom.  Mat joins the tour at the customer service area where your film is sorted by type, process, and other special requests! He also chats with two employees Tamara and Shelly about their work at the company. The highlights of the tour included the impressive dip-and-dunk system used to process everything from black & white to colour negative, color slide and being able to see how the Darkroom makes all their photo products, mugs, metal prints, and much more. 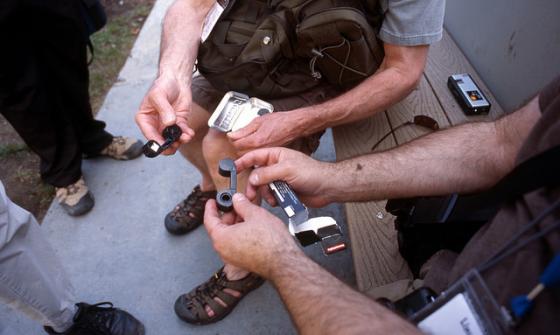 110 film is alive and well and Colin loves the format. In fact he even cuts down Kodak Portra from 120 to 110 format using a film slitter he picked up through Goat Hill Photography, then reloads it into used cassettes and shoots away! But you have to be careful not all cameras will accept the reloads, you’d need the Canon 110 ED, Pentax Auto 110, the Mark 1 Minolta 110 SLR, or the Kodak Instamatic 60.

Michael manages to surround himself with Polaroid shooters including FPP friend Marcello Yanez who did the interview with Eddita Sherman back in Episode 66. Marcello got into Polaroid and Instant through the FPP even getting his trusty Auto 250 through the FPP on-line store and has since added an SX-70 into the mix. A husband and wife team, Sarah and James Eakins are also both big fans of Polaroid! Sarah working mostly with the Spectra format while James preferring the 8x10. James also is a fan of FPP’s 35mm Infra-Chrome Color Infrared Film and put together a show at Fullerton’s Magoski Art Colony with film developed and printed to aluminum by The Darkroom. If you can’t make it out, you can always check out James' work on Flickr. Another member of their happy gang is Jessica Reinhardt who shot the format through college, put it away but then picked it up when she learned that Polaroid was stopping production. She now uses Impossible Project stock and loves shooting the PZ600 in B&W behind a red filter.  If you’re into Polaroid and in the LA area Sarah, James, and Jessica host Polaroid Photowalks, get in touch with James (broaddaylight) or Jessica (jetsetter23) on Flickr for details. Another attendee Larry Shapiro asks what you can do with Polaroid films today - if they can be manipulated like the old Polaroid Time Zero film. While you can't do that anymore, you can still do plenty! From emulsion lifts to even recovering and bleaching the negatives!

Jessica also has mounted on her freshly won Nikon F the Lomography Petzval lens that caught the eye of attendee Jeff Greenstein. The lens was developed and funded through Kickstarter. The brass beauty is a modern copy of late 19th century optics, that rather than using a bladed aperture that we know with modern lenses this uses inserts. The glass isn’t cheap, retailing for 600$ and comes in Canon EF or Nikon F mount in either black or brass.

That’s it for us but don’t worry we have some awesome shows coming up with the first one in a short two weeks! Ending the show is the song Instant by broaddaylight the band of our new friends Sarah and James Eakins!