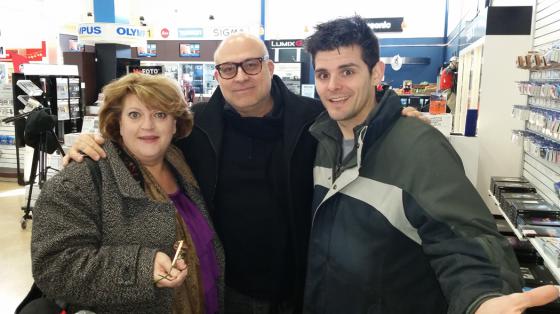 It goes without saying that the big topic for today’s show is medium format, being our 120th show, but that’s not all, we also have some 4x5 talk with the Cambo 4x5 camera, quick and cheap bellows repair, a book-of-the-show, field trip to Unique Photo, Listener Letters, and so much more, so grab a cup of coffee and join Michael Raso, Leslie Lazenby, and Mat Marrash! Also, did you know we’re only two weeks (two weeks? You sound like a bird!) from our Walking Workshop III! Yes, that’s right the FPP will be off to sunny San Clemente in a few short days, if you still want to attend, time is running out but email Leslie to see if there’s still space!

We have also gotten a pile of great holiday letters and cards from you, our awesome listeners that include a great year-in-review comic from the Lowey’s and plenty of darkroom prints. We do love 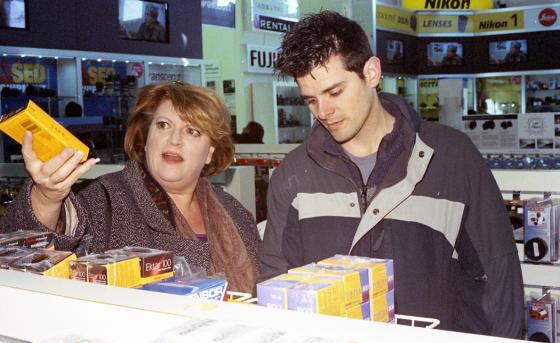 A Field Trip to Unique Photo
The gang took a visit to Unique Photo in Fairfield, New Jersey. Unique Photo is the only camera super store left in the state and is a great experience to go to! They still stock film, all sorts from 35mm to large format, even Instant film from Fuji. 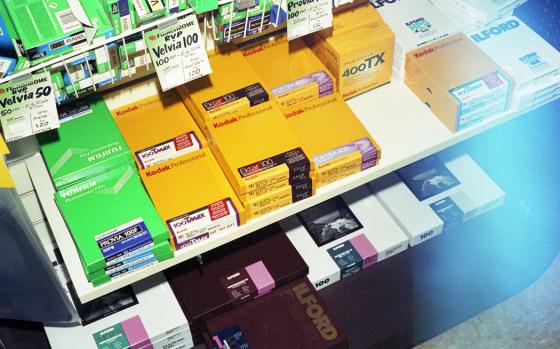 There’s even a bin for expired film on the cheap (provided that Mark Dalzell hasn’t bought it all up before you get there). In addition to a great retail experience, the store has a well-stocked rental department and super educational programs. It’s always a stop for me when I’m in the state! If you go and find that the in-store café is closed, just pop down the highway to Calandra’s Bakery! 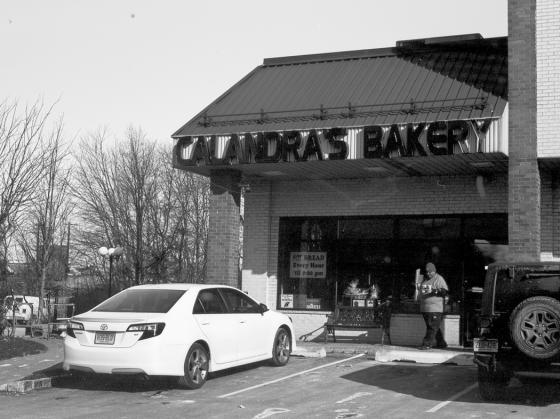 Leica’s, Old Film, and Fixer Troubles
FPP Listener Adam writes in with a letter sure to give you GAS! He recently got his hands on a rather nice collection of cameras that include such gems as a Leica M3, a Minolta CL (a camera produced in partnership with Leica and uses the M-Mount lens system), and a Rolleiflex, but he has a few questions. The first is the M3, at the higher shutter speeds the speed itself is off. Leslie suggests that the camera just needs a good CLA, that is a Clean, Lube, Adjust, and she has only one person for the job. The amazing gentleman behind YYE Camera. He’ll get your camera working right and make it look almost brand new! Another question is regarding some old motion picture film his friend has. The old family movies haven’t been stored well and are starting to breakdown. Michael, being in the motion picture industry himself points Adam at Larry Urbanski, who has a product designed to soak the film and get it restored to a point where it can be transferred to a new medium. And the final question is fielded by Mat regarding how much is too much for using fixer in film developing. Mat’s rule is that if he doesn’t know when he’s mixed the fixer, he’ll just dispose of it (properly) and mix up a new batch. Leslie recommends doing a clip test, or you can also use Hypocheck chemistry. 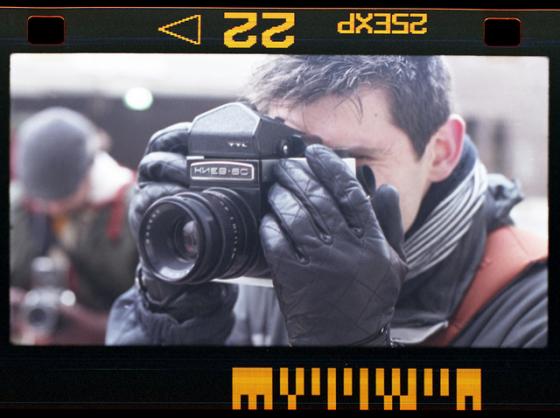 120th Shoe - Of Course we talk about medium format!
Mat just has to say it, 120 film is not named that way because it’s 120mm in width, and it is actually only 60mm in width. In fact 120 film is the oldest roll film format still produced having been created in 1901 by Kodak to go with their new No. 2 Brownie Camera. Medium format is still big today and the cameras are pretty popular. The film can produce a nice big negative, even the smallest format, 6x4.5 produces a much larger negative than 35mm! From the retail side of things the cameras are pretty quick through stores like Midwest Photo Exchange. Mat’s personal favourite pick is of course the Hasselblad 500cm system, but if you’re looking to get into Medium format but are on a budget, you can get a Mamyia RB/RZ67 system for a song these days. Other popular cameras are the Pentax 67 and the Mamyia 645 series. But there are plenty others out there such as the Contax 645, Pentax 645, Bronica kits, and even some Russian/Soviet offerings. Many toy cameras out there like the FPP Debonair use 120 film. 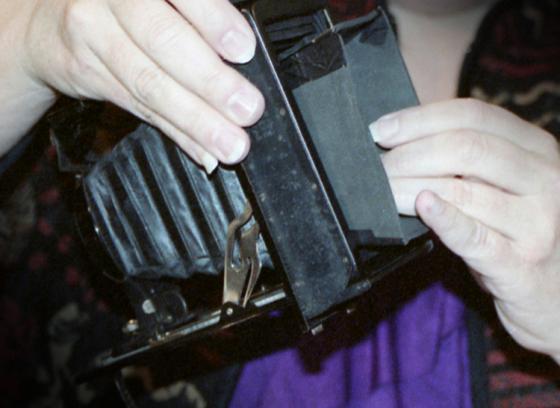 The camera a Kodak Folding Cartridge Primo 2a, now how does Leslie still use it? Well she shoots 120 film in it, and just like putting 35mm into a medium format camera, you can expose the full width of the film! The trouble with the camera however is that the bellows let in more light than the lens does. Rather than spend a pile of money on getting the bellows replaced, she went a little cheaper. Using black craft foam she made an insert that does the trick. The only trouble is that the camera can no longer be folded or focused (stuck at infinity) but it means that this beauty can be used still. You can find cameras like this (and in this shape) at most antique stores, but the cost will probably drive you away. 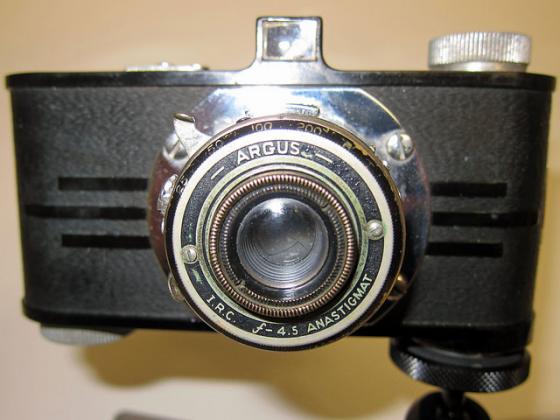 Argus Eh? Or Argus A?
FPP Listener Robert “Bob” Dugan (who does some fantastic gear shots on B&W Svema Films) has written a beautiful blog piece for the FPP about the Argus A, the very first camera out of the Argus Corporation of Ann Arbor, MI. The A, the article states is one of the most important cameras ever produced. This 35mm beauty first hit the market in 1936 and at 12.50$ made photography within reach of the masses who were just starting to recover from the great depression. You can read the full story here: filmphotographyproject.com/content/reviews/2015/01/argus-35mm-camera Also be sure to check out Bob’s photos with the Argus A on Flickr! 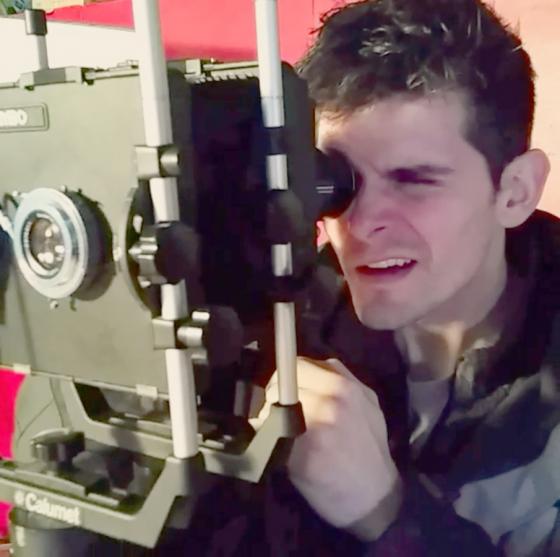 Cambo 4x5 – A Student’s Large Format Camera
FPP Superfriend Matt Ayers has sent in a large selection of cameras as he’s busy reducing the size of his own collection. Among the items is a Cambo 4x5 with some sweet accessories that Mat walks us through. The Cambo 4x5 from Calumet cameras is a great camera for students, while a monorail which makes is a little hard to use outside the studio (but not impossible) but offers every movement available making it great for learning 4x5 on. The camera also came with what’s known as bag bellows. Unlike traditional accordion style bellows that when you have a wide angle lens (anything under 120mm in focal length) you have to compress the bellows pretty tight making it next to impossible to move the camera standards around, that’s where the bag bellows come into play. As the name implies they’re just a bag you put between your front and rear standard that give you the freedom to move again. Matt also included some 4x5 hangers (which are great for thin emulsion film like X-Ray film, Adox, Efke, and Foma films). You’d just need to pick up some 4x5 or 5x7 tanks to use them in developing. 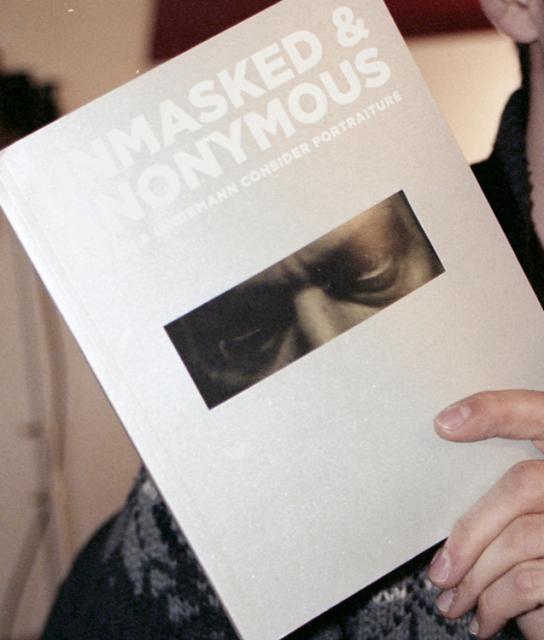 Book of the Show
We continue to work through Mat’s recent collection of books from his trip through Half-Price Books. Today he has a neat one called Unmasked & Anonymous: Shimon & Lindermann Consider Portraiture. The book is a collection of off-the-cuff portraits by the husband and wife team often working with large format and a single light to create this collection of quirky portraits. While not for everyone, Mat really enjoys the book and recommends it for anyone into portraiture of a unique nature. They also maintain a presence on Flickr! A perfect musical pairing for browsing this book would be the work of Lewis L’Amour available through Light in the Attic Records. The off-beat LP L'Amour is also available on Spotify (song samples on YouTube as well)!

Well that’s it for us, if you can’t join us in San Clemente, we’ll have the next podcast up in a short two weeks, and why not close out the show with some more of the wonderful music of Lewis L’Amour! Also don’t forget to check out our FPP forums or FPP Flickr Group! Also have a burning question or just want to say hi, drop us a line at: podcast@filmphotographyproject.com!