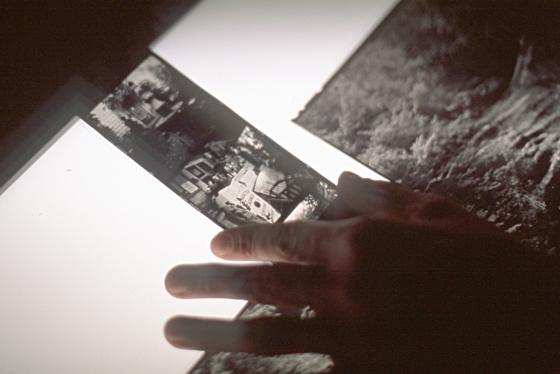 John is quick to point out that with almost everyone decorating their homes for the upcoming holiday season now is the perfect time to get out there and shoot with the Kodak Vision3 500T film. This is an iso 500 film that is balance for Tungsten or "hot lights", which makes it perfect to do some wonderful night photography of holiday lights! And is just one of three Vision3 motion picture films that are available for you in the FPP store. This is genuine Hollywood motion picture film broken down into 35mm cartridges for your favourite still camera. Processing is (at first) a challenge if home processing because of the remjet but The FPP offers tips here! Also, your average lab won’t be able to process it, so you can either do it yourself, or send it off to the Little Film Lab in California for processing. 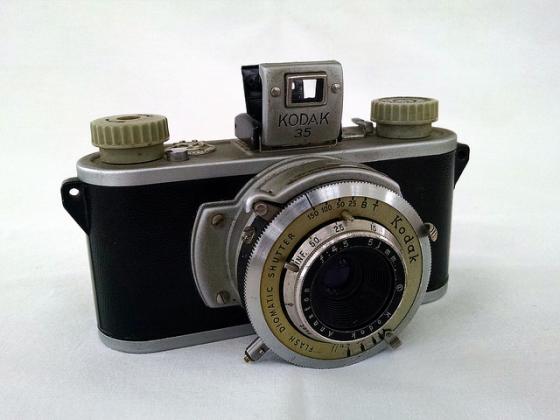 The Kodak 35!
Mark brings in a rather historically important Kodak camera, the 35. Yep that’s it, the Kodak 35, first produced in 1938. What makes it so important? It was the first Kodak still camera to use the 35mm format! This tough Bakelite and aluminum camera was produced as a direct competitor to the Argus C-Series of cameras but never really put a dent in the Argus market share. The simple reason was the C-Series, specifically the C3 was overall a much better camera. The 35 was produced with four different lenses, the early cameras used either a Anastigmat 50mm f/5.6 or an Anastigmat Special 51mm f/3.5, later post-WW2 cameras were offered with an redesigned Anastigmat 51mm f/4.5 or a Tessar design Anastigmat Special 51mm f/3.5. The trouble is that the camera was just awkward to use (as Mark explains), there’s no rangefinder, so it’s guess focus. There is a cold-shoe to mount an external range finder, and a flip up viewfinder that does have parallax correction, and a self-timer. It can use a flash, but it is M-Synced for use with Flash bulbs rather than electronic. The main issue is that the lens and shutter are taken right off of Kodak Folding cameras so the shutter release is in an awkward spot to use. The camera was in production for a good seven years and was eventually replaced with the Kodak 35RF which had a built in rangefinder.

DR5! Black & White Slide Film from your Negs!
In the past you could only get B&W positive slides by using Agfa Scala 200, Foma 100R or using a TMax with a home reversal kit...not anymore! They’ve been mentioned on the show before but now Mat brings us the magic that is dr5.

This Denver, Colorado film lab specializes in taking most B&W negative film and using a special process to make positive images. The results? The whole gang agrees are spectacular! They’ll process such films as Kodak Tri-X, Ilford HP5, FP4, even SFX200. And yes, even the FPP’s own Svema line of films (including the awesome Svema fn64)! It will cost 14.50$ a roll for 35mm but they also do medium format, 110, and sheet film up to get this, 11x14. Check out their site: www.dr5.com for more details and processing information! 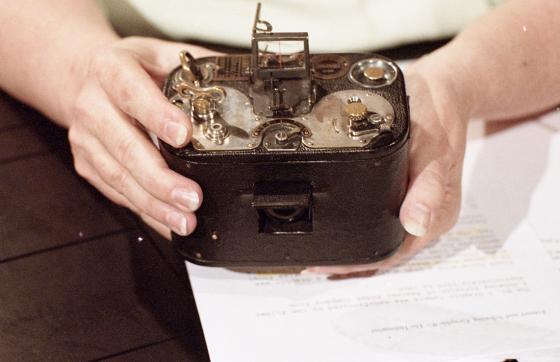 Number 0
Leslie has an interesting camera to share as well, that sort of looks like an old-style dynamite detonator, but it’s actually a Folmer & Schwing (pictured above - you might recognize the name as they went on to produce the famous Graphic line of view cameras) No. 0 Graphic. This odd ball camera was produced between 1909 and 1926 during the period where Folmer & Schwing was a division of Eastman Kodak. Equipped with a Ziess Anastigmat f/6.3 lens the camera used Kodak No. 0 FP Roll film and produced 1 5/8” by 2 ½” exposures. While you can’t get that particular film stock anymore, 127 film does fit the bill. The trouble is because of the age of the camera they’re hard to find, just like any information on them. Operation is a bit difficult, as it uses a Graphic Focal Plane Shutter so you’d need to select a tension and opening using a chart on the camera body itself. If you’ve used a Speed Graphic you’d be very familiar already with the operation. Leslie’s camera is the product of her restoring this beautiful mahogany covered in Morocco Leather camera from two cameras she found on Ebay. When they were new they weren’t cheap either, going for 40$ in 1914, corrected for inflation that’s 900$ today! 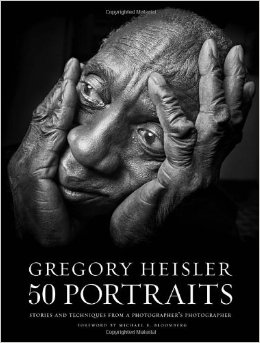 Book of the Month
Mat has an amazing book that is a must have for the December book-of-the-month. That book is 50 Portraits by Gregory Heisler. Now if you haven’t heard of Gregory you’ve probably seen his work having photographed numerous public figures, celebrities, and athletes. This book is just filled with inspiration, as each image is accompanied by text. Mat has even met the man himself and has an autographed copy. A worth addition to any photographic library. 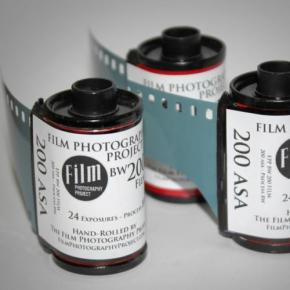 We’re Watching You! (Not Really, but this film might have)
One of the newest additions to the FPP store is a strange ASA-200 film stock that really no one has any idea what the film is, just what is was, and that it’s a really great film. The FPP came into a 20,000’ spool of this film from a private surveillance company and Michael, Leslie, and Mark O’Brian and several others have been testing it out.


All we know is that it’s an ASA-200 film, manufacture is unknown as there’s no information on the film rebate. Polyester base with motion picture styled sprockets (slightly rounded), with a wide tonal range. Responds well to D-76 or HC-110, but would need a filter in Xtol Leslie recommends. She has also done some portraits on the film with wonderful results, pushing the film and developing in Diafine.

ON-LINE SPECIALS! Speaking of the FPP On-Line Store, looking for the perfect gift for the film photographer in your life, look no further than the FPP! We have great gift packages of film in the beautiful gold Kodak film cans that the bulk spools come in, along with Polaroid Automatic Land Camera packages. Also if you haven’t yet, check out The Darkroom and use the code FPP35OFF before December 6th to get 35% off almost everything they sell! (Excludes gift certificates or items already on sale). And that’s it for us, but don’t fret, we’ll be back in a short two weeks for our Holiday Special! 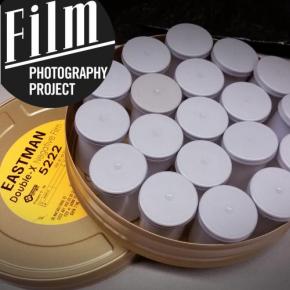 Frank Jolliffe! Back in 1988 Michael Raso and John Fedele recorded Frank for their regional TV show "Meadowlands Showcase." You've heard the music on The FPP - here's the video!

See everyone in two weeks!