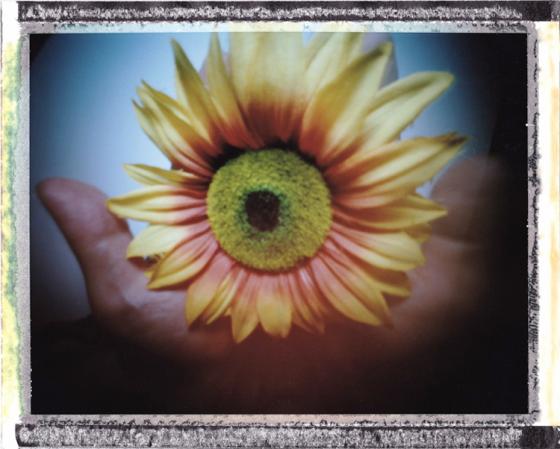 Provincetown photographer Marian Roth first came to live in the art colony in 1982. Since the late 1980's she has been making photographs with pinhole cameras made from objects such as cookie tins, vehicles and buildings. Roth received a Guggenheim Fellowship in 2001 and has received various fellowships and grants from the Massachusetts Cultural Council over the last 20 years. Her work has appeared in Eric Renner’s classic “Pinhole Photography”, in various magazines and journals, and a folio of her work was highlighted in “Adventures With Pinhole and Home-Made Cameras” by John Evans. Marian has exhibited internationally and taught widely. She makes her home in Provincetown.

Ms Roth's first ultra-large format one was made out of a dune shack but the trouble was that it could only shoot one subject. So she went and bought a 1989 Dodge Caravan, separated the passenger section from the cab, put a hole on the side and drove around creating images with the van. All her paper is hand coated, some as wide as 30 inches!

Remember, Worldwide Pinhole Photography Day (WPPD) is on the 27th of this month! Check out: www.pinholeday.org for more details!

This season Roth will have two exhibitions at AMP in Provincetown. “Sight Unseen” runs from May 24th to June 22nd.

“ERunning Stitch” can be seen from August 15th – August 27th.

Roth is also teaching a workshop called “How to Turn a Room Into A Camera” at Provincetown Art Association July 1 & 2.

Giveaway! FPP Super Friend Tony Kwong sent in a little package to the FPP, and inside was a Power Shovel Wide ‘n Slim camera, it’s another clone of the FPP favourite - Vivitar Ultra Wide & Slim -  and we’re giving it away! Check out our Giveaway section and sign up for a chance to win! 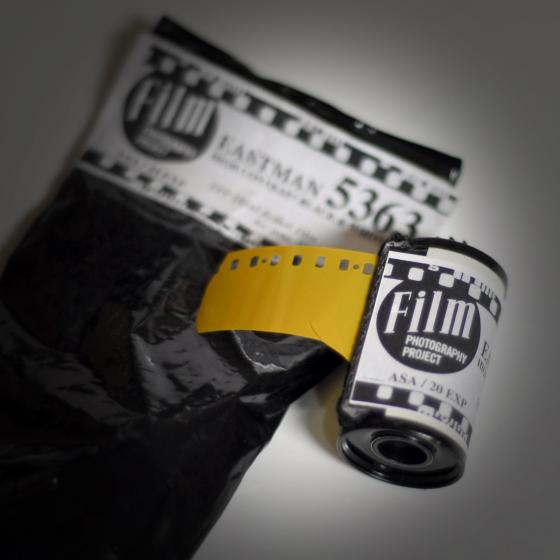 Eastman 5363 35mm film! Michael has been having a grand old time exploring the Eastman line of motion picture films, rolling them into 35mm cartridges to be used in still cameras!

The film of the week is Eastman 5363 High Contrast II. This is a motion picture film designed to create mattes and titles, can be processed as a negative or positive. This is a beautiful "chromy" film that’s rated at about ASA-25 (that’s what most people have seen the best results at).

5363 is a very blue sensitive film as Michael found out - he went and shot some portraits on the film using hot (tungsten) lights and threw a yellow filter on the lens. After developing the roll came out blank! The yellow filter and tungsten lights really cut out the blue light in the image, so the film couldn’t see what was happening. It really needs daylight or strobes to really work well.

If you want to check this film up, you can pick it up through the store. Also read over Mark O’Brien and Alex Luyckx’s blog entries on the film. It develops really well in D-76 (1+1), Diafine, HC-110 Dilution G, and Xtol (1+1).

Most people have a good old UV filter on the front of their lens to act as a protection. But there are plenty of other filters out there to really help get the best results from your images! Leslie kicks it off with colour films. The first is of course the UV filter, best bet it to spend a little bit extra on these and make sure they’re coated to get the best results. For the most part these are used to protect the front lens element, would you rather damage a cheap filter or a 200 dollar lens?

The second good choice for colour is a polarizer filter, these really help with colour saturation and reduces glare. Polarizers come in two types, a normal polarizer and a circular polarizer. The circular type can rotate the element to get the best look, and are best used with camera that have TTL meters and autofocus as the normal ones will often play havoc with the camera systems.

Filters for Color Film - Back in the days before Photoshop, you would use color correction filters to alter the hue of your film.  For shooting daylight film in tungsten (indoor) light you need an 80 series filter, 80A, 80B ect, the 80B being your best bet.

Shooting in florescent light will give you a green hue. To correct use a FL-W filter.

To shoot tungsten film in daylight you’ll need an 85 series filter (85A, B ect). But Leslie’s favourite filter is the 81B, this is a warming filter that really helps things pop and gives them a nice warm glow, especially portraits.

Filters for Black and White Film - Black & White film is a different beast all together. The three main filters you need to worry about in B&W is Yellow, Orange, and Red. These filters cut out the blue in the image to help increase the contrast between the sky and the clouds and really help make your images pop. By the red filter, the sky is almost rendered completely black. You can also  use the deep red (Red 25A) with IR films (or an R72 filter for even more effect) or semi-IR films like Ilford SFX200 to render the skies a scary black and green foliage white.

There are also two ways to mount filters, the standard one is the threaded screw-on filters, while handy it also means that you need to carry several of one type of filter if you want to use different lenses with different diameter front threads. While you can get step-up and step-down rings, you need to make sure that the filter is always bigger than the lens itself to avoid vignetting. However there is an alternative, companies like Lee and Cokin use a  universal filter system that mounts an adapter ring and a holder you can slide the filter into, or you can just hold the filter in front of the lens. Want to explore more, check out some websites (Ilford, Ken Rockwell, and Joe Miller) that deal with how to use filters! 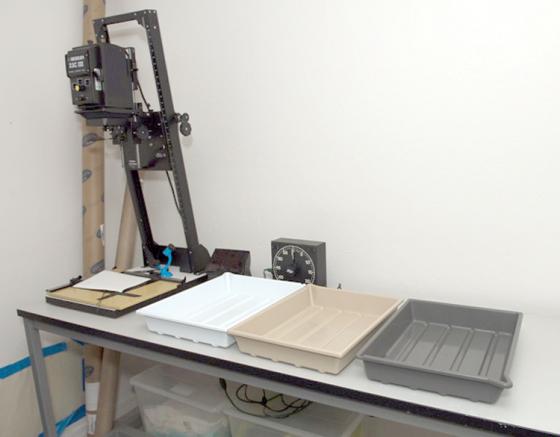 Rick Paul in the Darkroom! Resident Nikon expert, Rick Paul steps away from the cameras for a while to bring two wonderful books. Both books are by Steve Anchell, The Darkroom Cookbook and The Film Developing Cookbook. Both books are great because they don’t just say how you do things, but why. They cover everything from the very basics well into the advanced things such as the chemistry side of things that can even have you making your own developers from scratch, or even improving the ones you have to better suit what you’re looking for! 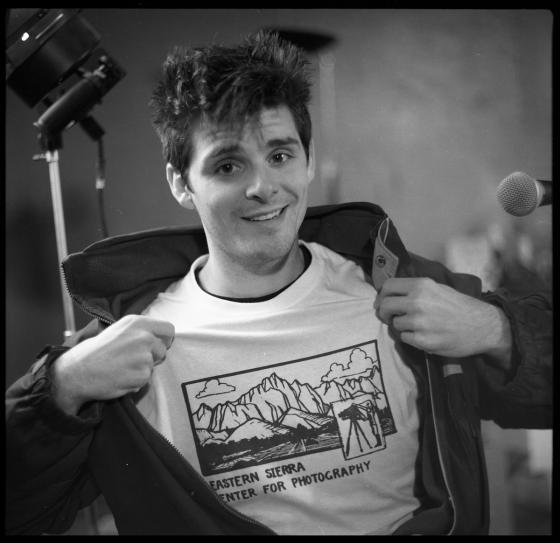 Michael notices that Mat is wearing a t-shirt from the Eastern Sierra Center for Photography and asks about what they’re all about. ESC4P is located in Lone Pine, CA and was founded by noted large format photographer Laura Campbell. She created the center to promote large format photography across all ages and genders, and have been doing some great work. Check out their website: esc4p.org for more details and to see some work by some fantastic photographers and consider donating, like the FPP they run strictly on donations. 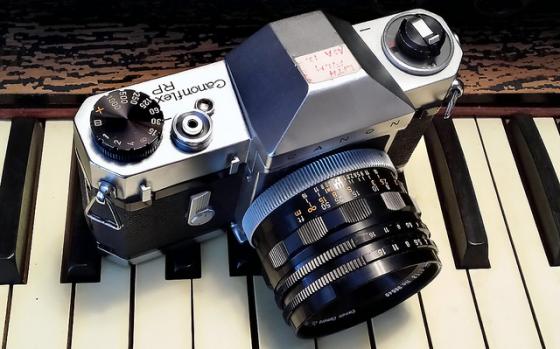 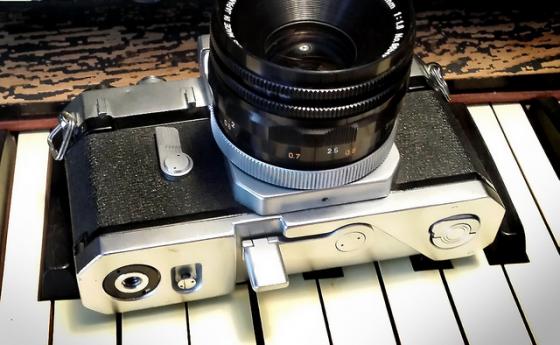 Canonflex! The Canonflex was the very first SLR released by the company in 1959 to respond to the Nikon F. It shared some similar features to the F such as the interchangeable prism, but had one unique feature which was the film advance leaver was on the bottom of the body. The camera also used the R-Mount, a breach locked bayonet mount. The user had to manually stop down the lens before taking the photo. Canon released three models of this camera the original Canonflex, the Canonflex RM and the last Canonflex R2000 before they were replaced with the FT line of SLRs and the Pellex. These are heavy and awkward cameras to use, even Leslie hasn’t used hers mostly because the shutter is a bit sluggish. While you can find these cameras on Ebay, they’re fairly rare and get a bit expensive. 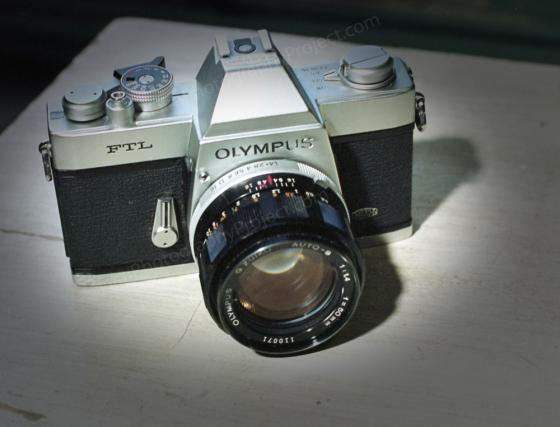 Olympus FTL! Is it an Olympus or is it a Canon? Maybe it’s a Minolta or Pentax? The Olympus FTL was not designed by Olympus, we know that much, but the actual designer of the camera remains a mystery to this day. Released in 1971 the FTL lasted a short 7 months before the more familiar Olympus OM-1 was released. The lenses are Zuiko glass that’s for sure, and use a unique M42 thread mount that locks, allowing for full TTL metering! Leslie says they’re a joy to use, solid with glass that is nice and sharp. The camera has shutter speeds between 1” and 1/1000” and blub mode. Sadly with only a 7 month production run they’re rare and when you do find one, they may cost quite a bit. 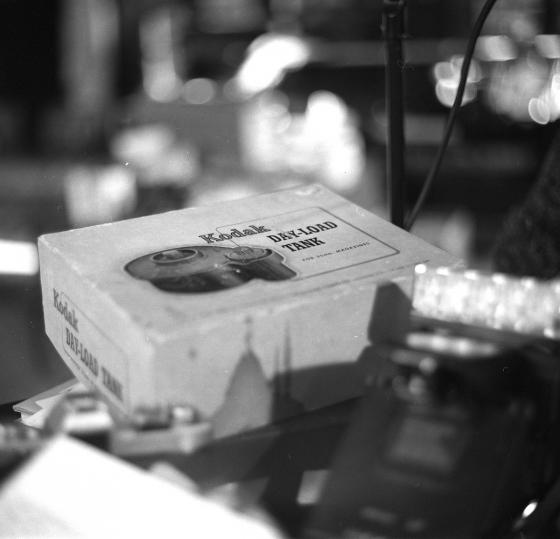 What were they thinking?
The Kodak Daylight Loading Tank was one of several that were released in the 1950s. The idea was you’d put the 35mm cartridge into the tank, seal it, crank a knob that would automatically feed the film onto a real, then you’d just develop it, no more fumbling inside a darkroom, box or change bag, right? Wrong. Leslie has never gotten them to work, and often you can still find them new in box, which says something about the quality and ease of use. Best to stick to a Patterson, Hewes, or Jobo system! 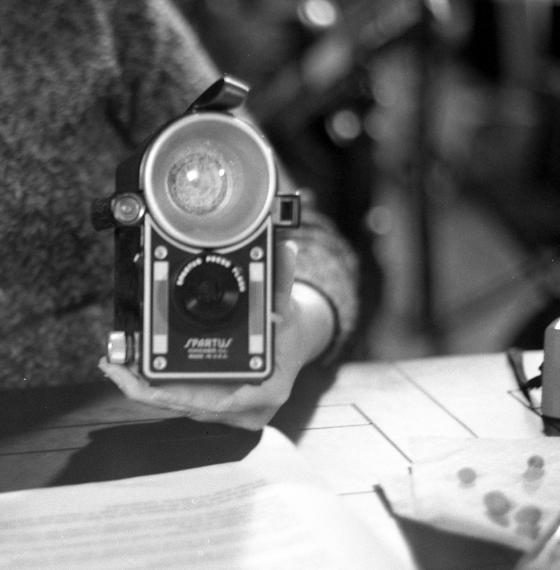 Box Camera Madness! The Spartus Press Flash, this art-deco styled camera has appeared under many different names from its introduction in 1939 to 1950, and holds a unique place in history as being the first camera with a built-in flash reflector. The flash takes the massive Number 40 or 0 bulbs that have the Edison Screw mount (however you actually just push the bulb in). These are fun cameras to use, although Leslie uses it without a flash, because it’s a pain to get the AA battery needed to power the flash into the holder.

Big show! But don’t worry we’ll be back in a short two weeks. Until then consider checking out and attending the Walking Workshop in just over a month, also think about shooting a donation to the New55 project’s Kickstarter campaign. Until next time, keep shooting, posting to the pool, and join in the discussions! Taking us out today is The Pink Delicates and Darren Riley!

Pen to paper or packages: