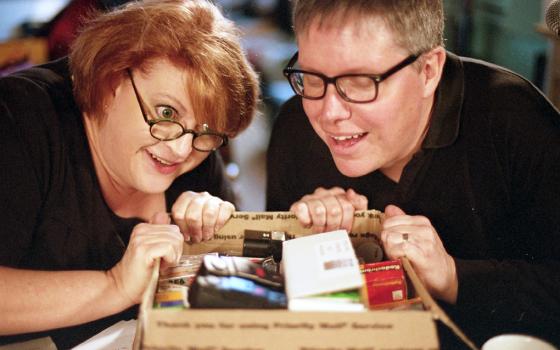 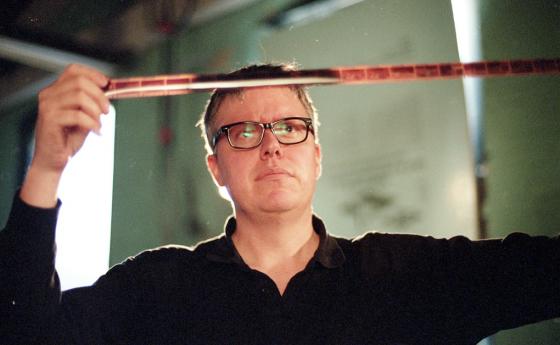 Hey we’re back! Joining Michael Raso in the studio today is Mat Marrash, Leslie Lazenby and Mark Dalzell. On today’s shoe are listener letters, Olympus XA-paloza, Insuring your Gear, What’s in the Box, Large Format Report, and much more!

TravelwideUpdate
FPP listener Jeremy Tutor writes in, and talks on the Travelwide camera. If you’ll remember from last year Mat introduced us to the Travelwide, a lightweight 4x5 camera from Chicago based Wanderlust Cameras. The kickstarter campaign was a huge success, and now cameras are starting to find their way out, and some are getting into the hands of FPPers, so we’d love to see your results in the pool! However the focusing is a bit of an issue as the cameras don’t have a traditional ground glass, and a good rangefinder isn’t cheap. Leslie suggests trying a laser measuring tape, while Mark suggests trolling Ebay for some older units that fit onto the accessory shoe. (what shoe?) 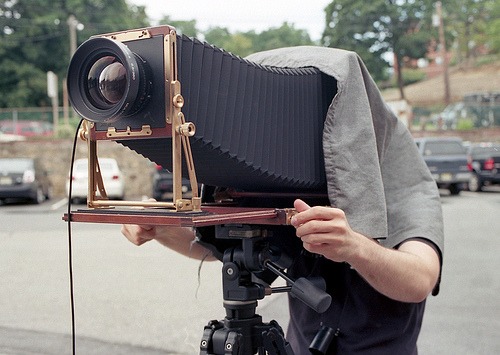 The LF (Large Format Film) Report
Mark recently had a customer come into his music store and started asking about 8x10 cameras. The customer was looking for a compact, portable lightweight camera within a 2,000 to 3,000 dollar budget. "Go used," Mat suggests.

A good used Deardorff or Tachihara field camera would fit the bill, you can also pick up Tachihara cameras new (from Midwest Photo Exchange) or look into Shen-Hao or Chamonix out of China. Additionally if you’re willing to put up with the quirks of an older camera a Kodak 2D or Eastman Commercial B would work as well. For lenses, a good 300mm standard lens is your best bet, APUG and Large Format forum has dedicated buy/sell areas with good deals, additionally KEH and Ebay are options to find a lens as well, you’re looking at a 300 to 1,000 dollar cost. Film holders are needed also, they run between 50$ for used, or 200$ new. 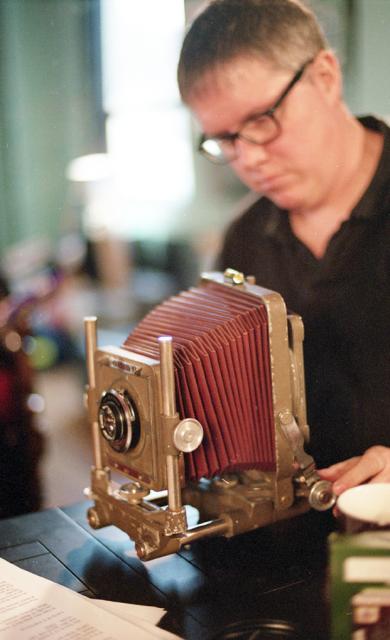 Mark also has a beast of a camera with him - a fully machined aluminum 1947 4x5 Newton Camera Co New-Vue VC2 monorail view camera. It was a steal on ebay, and has a wonderful Wollensack Raptar 127mm f/4.5 lens, is in beautiful shape and even has a brand new ground glass piece in it from Canham Cameras. Although the gridlines throw Mark off, Mat says that Midwest sells just plain ground glass for 4x5.

Looking into getting into LF photography, your best bet is to look at what you want to get out of it first. The press camera is a great starting point if you’re a from-the-hip shooter If you’re more into landscape and architecture and need some more movement consider field cameras. If you’re more static and sticking to studio work, jump on a monorail or similar studio camera. Looking to get LF film? Check out the FPP Store’s offering! We have both 4x5 film and 8x10 and if you’re needing someone to process your film The Darkroom offers full sheet processing for B&W, C-41, and E-6! 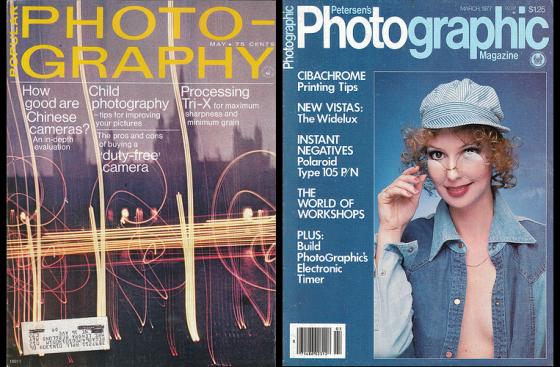 Vintage Mags!
So what sort of old (and not so old) photography magazines does the gang like to read? Older photography magazines are a great source of information that just can’t be found in (most) modern publications. So going for the vintage can often yield details that are hard to find. Michael recently picked up the June 2001 issue of Practical Photography when he was heading down to Florida to shoot some Infrared film. The issue was suggested because it had a whole spread on IR photography. Leslie however has a different reason for looking at the magazine, she prefers US Camera (1950s and 60s), Peterson’s Photographic (1970s to 1990s) and looks at the darkroom work and the camera ads, just in case a camera there pops out at her to add to her collection. Mat goes for a still published Magazine, View Camera, in fact he’s had some of his X-Ray work published in the magazine! 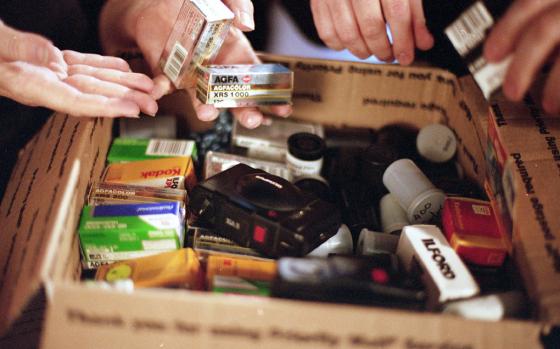 What’s in the Box?
Today’s fantastic box comes from Sunny Florida by J. Drake. It’s like a second Christmas as the box is filled to the brim with film, Kodak Tech Pan, Agfa films, Fuji and Kodak Slide films. But it also contains several examples of the Olympus XA series. The XA was a series of compact 35mm cameras. The original XA (1979) is a full aperture priority rangefinder camera with a 35mm f/2.8 lens, the follow-up XA2 (1980) was a zone focus fully automatic camera with a 35mm f/3.5, the cousin to the XA2 was the XA3 (1985) which had similar specs as the XA2 but featured DX Code reading, also in 85 the XA4 was released that featured a great 28mm f/3.5 lens and great macro abilities. The ugly cousin of the group, the XA1 (1980) is basically a Trip 35 in the body of an XA with a 35mm f/4 lens, automatic exposure (from a selenium cell). The gang loves these cameras, lovely sharp lenses, compact, quick, and highly sought after by compact enthusiasts and street photographers. The XA2 and 3 run in the 10$ range on the used market, the XA and XA4 however go for between 80 and 100. However we’re giving you a chance to win! Check out the giveaway section for a chance to win some of these fine cameras including a XA, XA2 and XA3!!

Insure your Gear
You never know when something is going to happen, and with the amount of money we often drop on our camera gear, it’s a good idea to have insurance on it. Both Mat and Leslie have experience with gear theft but there’s also fire and other disasters that could cause loss. The good news is that most home and renters insurance will cover hobbyist and some business related camera gear. Most professional photography organizations, like the Professional Photographers of America (PPA) has up to 10,000 dollars of coverage included in the membership. If you look at the bottom line, the cost of insurance is nothing compared to the money you’d have to shell out to replace the gear. Your best bet is to record the serial numbers of your gear, keep receipts (if possible) and photos of your gear. Better photos of you with your gear will go a long way if you need to make a claim. We recommend you speak with your insurance broker! 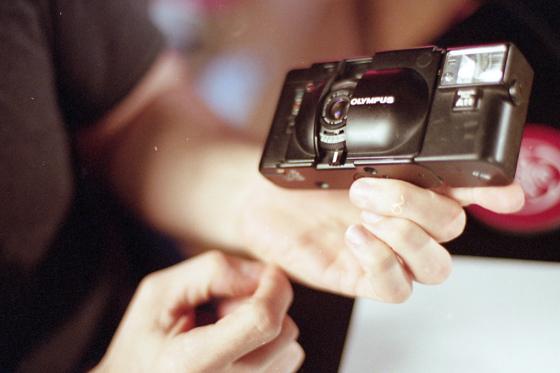 Contact The FPP! Yes, you’ve heard the numbers right, we’re coming up on our 100th episode and we want to hear from you! Leave us a message on the FPP Hotline (no actual person will pick-up) by calling 973-850-6330. Also emails or notes/packages (Send Physical Mail to: Film Photography Project PO Box 152 Butler, NJ 07405 USA) are welcome as well!

That’s it for us, but we’ll be back in just a two short weeks!