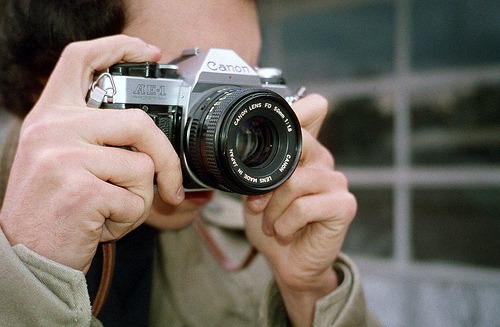 FPP Listener Martin writes in asking why the 220 film backs for his new 6x6 camera are cheaper than the 120 backs. But first we must answer the question, what is 220 film? Well 220 film is the same as 120 film, just double the length. So your 12 frames on 120 become 24 on 220. 220 was a popular choice for wedding photographers as it meant less time changing film over or swapping out film backs. Why are the backs so cheap? The fact is that there’s not much 220 film still produced these days, Kodak’s Portra 160 and 400 are available in 220. You might be able to find some expired examples on Ebay.

A couple listeners and Mat bring up the subject of Model and Glamour Photography, a topic that is no stranger to the FPP from back when Duane was co-hosting the show. Mat’s been attending a few group model shoot. This is when organizers bring in models (from either an agency or using model mayhem) and photographers then sign up to shoot with the models. Mat cautions against group shoots, especially ones where the models are not being paid, some make "flake out," however even paid models can still flake. It’s best, he continues, find ones where the models are paid, sure you as the photographer may have to pay more to come to the shoot, but you’ll get a more professional showing as a result. They’re great for practice, scouting out talent for future shoots, and even getting your feet wet in the world of model and glamour photography. Mike of course reminds everyone to get a model release from each model you shoot! Mat uses the FPP release pad, which you can pick up from the store! If you’ve worked with glamour or nude models, the FPP would love to hear about your experiences, email podcast@filmphotographyproject.com 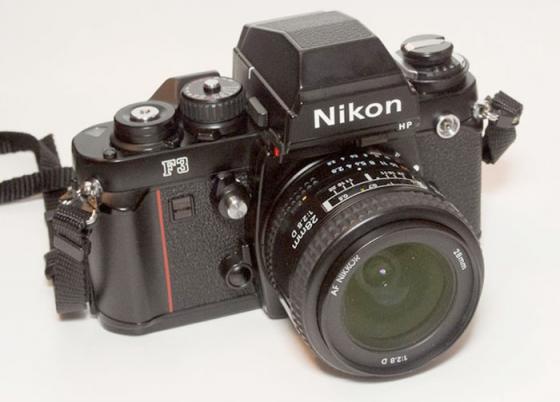 Resident Nikon expert Rick Paul brings in his next in his series of Nikon professional SLRs.  The Nikon F3, first released in 1980 is also the longest manufactured professional SLR! By the time manufacturing ceased in 2001, 751,000 cameras had been produced and many are still out there shooting today. Unlike the Nikon F and F2, which used a meter that was built into the prism (thus when you removed the prism you lost the meter), the F3 had the metering built into the camera body itself, centre-weighted meter that uses pin holes in the mirror to allow the light to hit the meter, so that no matter what prisim/view finder you used, you had full TTL (Through the Lens) metering without compromising the brightness of the viewfinder. The F3 also introduced full TTL flash metering as well, however the camera does lack a standard hot shoe, so you need to use an adapter piece, or get yourself a Nikon SB-17 Speedlight. The F3 also can be outfitted with the MD-4 motor drive, which gives the photographer a blistering 6 Frames-Per-Second speed, without too much loss to the overall feel and weight of the camera. Also of note, the F3 was chosen to be the world’s first digital SLR camera; in 1991 the Kodak DCS 100 used an F3 body as its base. These days the F3 can go for 250-400 dollars, keep an eye out on Ebay and of course KEH.

Jon Estwards, a Polaroid artist, hails from Montreal, Quebec (Canada), and works with both Polaroid materials and physical fiber art to create beautiful pieces of art. This mixed media artist found his start drawing, then moved into digital and film photography until he was given a Polaroid Spectra and figured out by accident how to double expose the images. He works to create new worlds through his art. To do this he started making fiber sculptures using yarn, and combining that with his Polaroid double exposed images. Want to check out more of his work, you can find him on flickr, tumblr, and his website - http://www.esjauer.com/.

Developing your own film at home is both fun and rewarding, but how about color? Unlike black & white, color requires a lot more control over temperature. Even half a degree off and your film could have strange color shifts. It doesn’t much affect scanning, but if you wanted to make a darkroom color print, you’re toast. Mat mentions that many people who do their own home colour processing using a Jobo processor (CPP system) which has a built in temperature control system that keeps the temperature of both your chemistry and the tank doing the processing. Although fun, the gang agrees sometimes it’s just not worth the headache, and to just send it out to a professional lab that you trust (The Darkroom provides excellent service, and they do everything from 110 all the way up to 8x10). If you want to try it at home, these days you can pick up a three bath kit from Freestyle for both C-41 and E-6.

One of the easier things to do at home is black and white developing. Developers come in two forms, powder or liquid. Some powder developers are Kodak’s D-76 or Xtol, there’s also Accufine and various others. Powder you mix with water (after reading the instructions on the packaging) to create what’s called a stock solution. The plus side of stock solutions is that you can develop right from it and then once done dump it back into the jug and reuse it. You can dilute it down to make for a finer grain, however it then becomes a one shot developer (can’t be reused). Some common dilutions are 1 to 1 (one part water, one part developer), it takes a bit of math, but the trick is your add the two numbers together, and divide that number by the total amount of solution you need to come up with the amount of developer you need, then finish it off to the final volume with water. The second type of developer is liquid; some common ones are Ilfosol, Rodinal, and HC-110. Developers like Ilfsol and Rodinal you dilute right from the syrup with water to create a one-shot option. Now this can be done with HC-110, but you can also create a stock solution from the HC-110 syrup to create a working solution, then dilute that down using the famous alphabet dilution (A, B, C, D, E, and F), to a strength. The best thing you can do is to play around, find the developers that work great for you (Mike likes D-76, Leslie is an Xtol gal, Mark Dalzel loves his HC-110, I use Xtol, Rodinal, and HC-110), and experiment, expect to make mistakes and fail, but it’s how you figure stuff out. The best advice, if you’re just starting off, keep it simple, Xtol or D-76 are good starting points. Looking to get the gear? Check out Freestyle!

Now that you’ve developed your film, you need to store it. Mike currently just keeps his negatives in labeled envelopes. John on the other hand uses binder sheets to store his. Leslie reminds the group that the most important part of any sort of negative storage system is that it has to be archival. This means that the item you’re storing it in, will not adversely affect your negative.

FPP has been giving away a lot of cameras over the past several months, however this month’s giveaway comes from FPP Super Friend Jim “Jimages” Austin, and direct the good ship Salty Paws is a mint condition Canon AE-1 Program, complete with a 50mm f/1.8 lens. Are you interested in winning it, sign up in the giveaway section.

And that’s it for us, but we’ll be back in just two weeks! As always, keep shooting, keep being super positive!

Want to connect with us? Email us at podcast@filmphotographyproject.com, post in our Flickr Group, on the FPP Forums, or write us a good old fashioned letter to: Film Photography Podcast P.O. Box 152 Butler, NJ, 07405 USA.