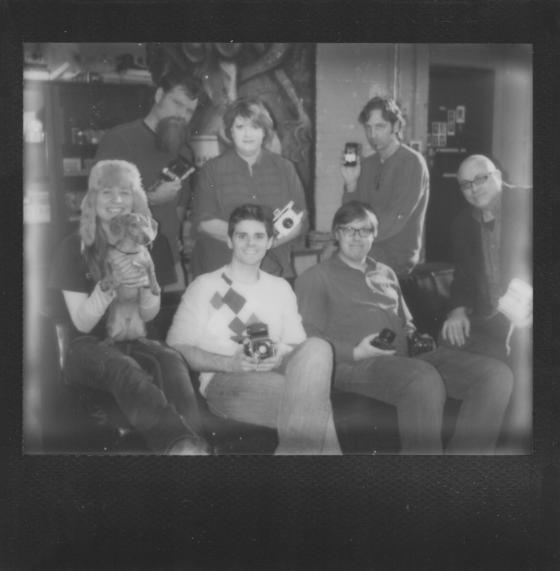 Going around the table and the question is what is your film photography resolution for 2013? Mat plans on shooting more slide film and some Impossible PQ 8x10 since he got a new Sinar P2 monorail 8x10 camera from Santa Claus. Mike wants to slow it down and get some work with his two 4x5 cameras. John resolves to get more organized and have his cameras ready to go before heading out the door. Leslie wants to do more 8x10 work as well with Impossible PQ film. Mark wants to do more black and white and get a nice 120 rangefinder camera. Dane just wants to document more, the reason behind the shot, and the details, and why he likes it.

Did you know the FPP store is the place to get Kodak Film? Prices are matched or better than the big camera stores! Plus you’re supporting the FPP in the process. Also the FPP stocks the full line of Lomography films and soon a supplier of Ilford Film stocks. Not the mention Fuji Instant Film, Impossible Films, cameras and more! Not to mention you get some pretty neat bonus items in your package as well when you shop at the on-line shop. Check it out here!

Leslie has brought in the long anticipated Lomography Belair X 6-12. This camera has generated a lot of discussion on the FPP Flickr page, and is just fantastic. It is a 120 camera that can shoot in the 6x6, 6x9, and panoramic 6x12 formats! Features full aperture priority automatic functions with a blub mode as well, interchangeable lenses in both plastic and Russian glass lenses. Focus is zone based. It looks like a Polaroid Automatic land camera, the offset electric eye and bellows!

Dane loves the classic design. Just watch out with the hot shoe, if your flash is took unwieldy, it will fall off. Generally the group is (super) positive towards the camera, it’s new, unique, and totally worth the money.

The response to Mat’s Film blog for 2013 has been good, lots of discussion. The list, Mat explains is far from complete, but it covers a majority of available film stocks. Mike’s impressed at some of the films being mentioned by Listeners. If you have something to add, drop us a line: podcast@filmphotographyproject.com

New camera to giveaway this month courtesy of Leslie (from Imagine That and The Mecca in downtown Findlay OH). A near mint condition Canon AE-1 with a 50mm f/1.8 lens, a FPP favourite, and that’s the camera that got Dane into film photography. This is a perfect starter camera, so head on over to the giveaway section and sign up to win.

Mat brings us his darkroom tip, having covered a lot of other topics already, now it’s time to start looking at the small details to make your darkroom more effective. One of the most important parts of developing film and making prints is timing. So what do you do about this? Many people use an egg timer, however working in the dark it’s often hard to see. Mat and Leslie both recommend the Grey Lab 300, you can pick them up from most camera stores or order it from our friends at Freestyle! Mat also suggests the Darkroom Timer (Free!) if you want to use your Android based device. Leslie also points out if you’re building your own darkroom, do not paint the walls black, they absorb all light making it harder to work in there, paint them a lighter colour.

Dane and Mark both have several new cameras to show off. Dane chats up the Super Baldina, a donation from Canadian listener John Medows. The Baldina, produced between the mid 1930s into the 1950s is a lovely 35mm folding rangefinder with German Optics. The cameras produce a wonderfully sharp image and Dane loves it! He just comments you have to keep the tension tight when winding the film. If you don’t you’ll hear the gear start to slip and you’ll end up wearing down the teeth making the camera useless. If you check out the giveaway section, you can sign up to win the Baldina! 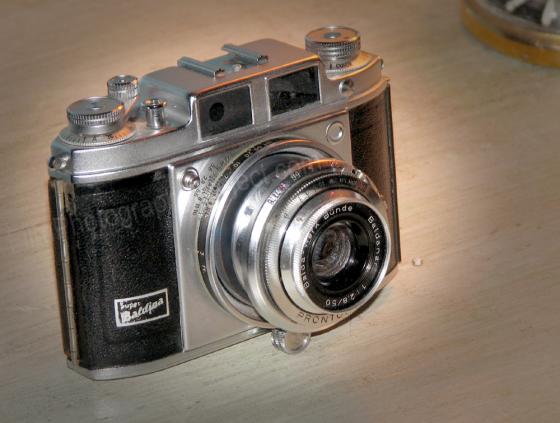 Dane also brings out his new 110 camera, an ITT one that takes a page from the book from spy cameras, by using a slide in and out to advance the film and cock the shutter. Despite its look the camera takes wonderful images. If you were at the PDN show with us, you will have seen it! Mark also has two cameras to show off, first is the rather crazy Minolta AF-C. It looks like a cross between an Olympus XA2 and a Lomo LC-A Mark comments. It even has the side-car style flash unit. The camera from 1983 features a sharp, full autofocus 35mm f/2.8 lens. It’s a great cheaper alternative to the XA series cameras as the cult status has driven prices up.

Mark also has two Russian SLRs, the Zenit 11 and Zenit ET. Both Cold War cameras out of the USSR have full light meters and are solid all mechanical cameras. They feature the common M42 screw mount which as Mat points out gives the user access to a very wide range of wonderful lenses, Super Takmaur anyone?

A listener writes in with some troubles developing Ilford HP5+ in Pyrocat HD. Mat, who is very familiar with the film and developer helps out. The negatives the listener describes as being pink, with faint images and a very dense negative. Crunching the numbers live on air, Mat figures that the trouble lies with some form of acid contamination in the developer. Pyrocat HD does not like any sort of acid which would cause such a result to occur.

The rickety road is calling, but don’t fear, the FPP will be back in Two Weeks on February 1st, 2013. Until then write us, post to the pool, and of course keep shooting!

Write to the FPP!

Starting with the January 1, 2013 FPP, Michael Raso has been presenting an extended indie music segment at the end of the shows. Dubbed the "Inner Groove" the segment highlights the music of friends of the FPP! Love the music? Support the artists by purchasing their albums!