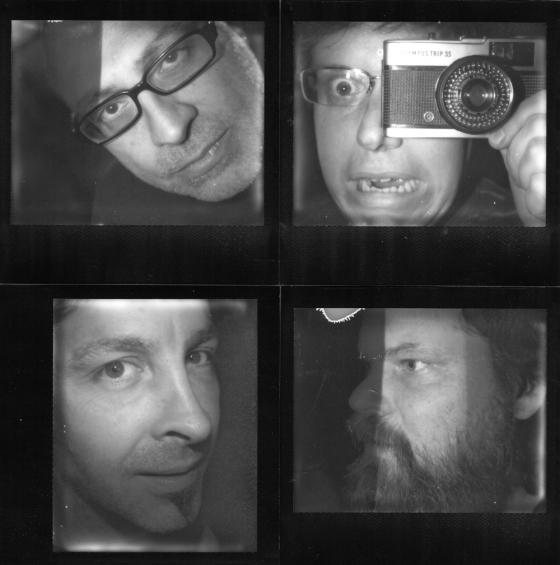 Happy New Year to all our listeners, what do you think of the new theme song!? On today’s show we have Michael Raso, Mat Marrash, Mark Dalzell, Dane Johnson, and John Fedele fresh from their New Year’s Eve celebrations to bring you giveaways, an interview with MET photography curator Mia Fineman, the uncanny Konilette, the Winpro 35, the highly sought after Nikon S2, plus a amazing camera, t-shirt, and film giveaway, new music, and much more!

Straight from the streets of New York City, its Hunter White, this time he’s haunting the halls of the MET (Metropolitan Museum of Art) speaking to Mia Fineman, the curator of the photography collection and exhibits at the MET. Their latest show titled “Faking It!” covering photo manipulation before the rise of Photoshop. The idea of manipulating photos is not a new thing Mia explains, as the exhibition covers everything from the 1840s when photography was starting out to the 1990s when Computers were becoming a part of the photographic process. The show runs until January 27th, 2013, and as Hunter says if you’re within 10 hours of New York City you need to see it. But if you’re not, the show will be heading to Washington DC, and Houston, TX later in 2013.

Have an old working camera lying around gathering dust or film? Why not give it a new lease on life and donate it to the FPP to giveaway on the podcast? Check out the DONATE section for more details.

FPP is going big this podcast with a great big film, camera, and t-shirt giveaway. There are three packages to give away! First off we have shirts direct from Kodak featuring the ever popular "Stay Calm and Shoot Portra" saying plus some film and of course cameras! The cameras being given away are a Canon EF (An electronic version of the F-1), a Sears KS Super (A Ricoh XR6 Clone), and a Pentax SF-10. Interested? Check out the Giveaways section and sign up to win!

Mat pops into the studio to give us a quick update on what film is available for us photographers in 2013 and the list is big(!), especially with all the news and rumors of film stocks being canceled, the state of film is pretty solid going into the New Year.

Kodak, Fuji, Ilford, Rollei, Foma, Ketmere, Shanghai, Holga, Adox, Arista, and Lomography are still putting out film in almost every format available - 110, 127, 120,35mm, 4x5, 8x10, and Instant film rolling out from Impossible and Fuji. Check out Mat’s latest blog entry for a full list! Now get out and shoot film (After you finish listening to the podcast)!


The Konilette, Mark’s latest addition to his ever growing collection of odd cameras is a Japanese made folding camera from the 1950s. Originally designed to take 828 film with a proprietary cartridge (which is no longer available). The master of mods routed out the inside to have it fit a 35mm cartridge. The camera features a 50mm f/4.5 glass lens, full range of shutter speeds and apertures, and a proper film counter so no guess work needed when advancing the film, even with 35mm loaded. And it produces some amazing sharp images with sprockets!

Dane brings out the WinPro 35, a submarine looking camera introduced in 1947 by Webster Industries. The camera made out of tinite plastic was the first to be produced using injection molding techniques and could stand up to a five story drop (which the company often did to sell their cameras). It’s basically a 35mm box camera Dane explains with a fixed f/8 lens and 1/50” shutter speed, and produces excellent images. Webster also produced a 3D version of the camera which wasn’t as successful as their regular Winpro.


Enough with the plastic cameras, Mark shows off the very shiny Nikon S2, the S2 is a rangefinder from the 1950s and part of the line of cameras that introduced the name Nikon into the industry. The S2 is a well oiled machine John says, with a big bright view and rangefinder. Like most rangefinders of the era the S2 features interchangeable lenses. After the introduction of the Nikon F, the production of these rangefinders slowed and stopped making them highly sought after.

New for 2013 - more music in the podcast (at show's end) from the Smoove Sailors, The Pink Delicates, Kilsy, Darren “Pancho” Riley, and many others…

And that’s it for this podcast, here’s to a filmtastic 2013 with more podcasts, giveaways and meetups, but until then we’ll see everyone back here in two weeks!