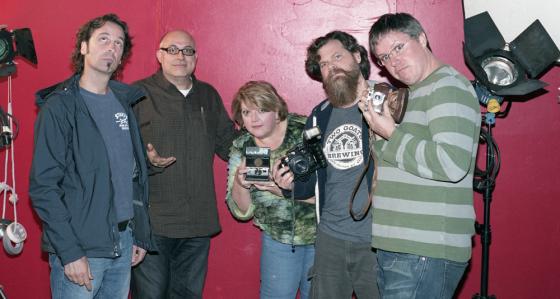 So who exactly is FPP Super Friend Leslie Lazenby? Leslie operates (and owns) two stores in lovely downtown Findlay, OH. The first, IMAGINE THAT! is a custom print shop and photo restoration so if you have slides or old prints that you want digitized bring it on down. Her second shop is THE MECCA, a studio and retail shop that deals with film photography in all forms, even Polaroid! If you find yourself in area why not stop in and say Hi!

Leslie is also known for bringing and sending in the odd and arcane when it comes to cameras and brings in a pile of odd cameras to show off to the FPP gang. The first one is The Fotochrome or the mistake from 1965, as she puts it. It looks like a larger version of Minolta’s 110 SLR the group notes as they pass the beast around. The company built it in hopes to take down both Kodak and Polaroid if the camera had lasted more than six months (insert laugh track). It uses a special Ansco direct positive film that had to be processed via mail-order. The film was rated at ISO 10, great for taking photos in on the surface of the sun (sarcastic – another laugh track, please). The cameras suffered from poor build quality and never caught on. You can find many on Ebay and in new condition. Dane of course wants to adapt it to take 120 film. 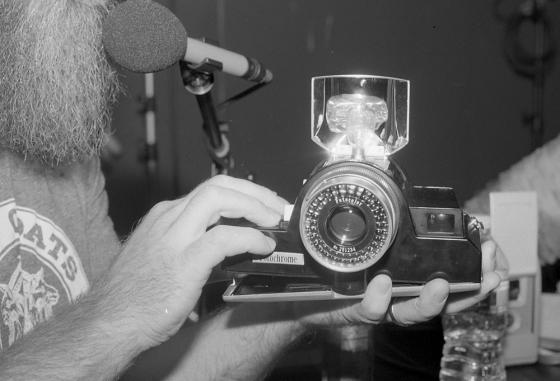 The next camera out of the box is an Anscoflex, a pseudo TLR (meaning the top lens isn’t coupled with the bottom lens). It’s a fixed focus 620 camera that is built like a tin tank. Aluminum build with a green enamel finish and red buttons. An interesting fact is that the camera was designed by famous industrial designer Raymond Lowey (Lucky Strike, Studebaker Avanti, GG1 and S-1 Locomotives and many other iconic designs from the mid-20th century). Leslie’s favorite feature is the ratcheted film advance knob on the side.

The sleek and luxury looking Olympus LT-1 is next, this leather covered 1990s point-and-shoot camera looks more like it should be used at white-tie dinners or the opera. Aimed at the high-end market, but don’t let the leather case fool you, this is an Olympus Stylus Epic dressed up for a night on the town - a 35mm f/3.5 lens with auto-exposure and focus will not disappoint the fans of the famous line.


The wonderful Canon Canonet QL-19! The 1965 rangefinder is big and uses the older (and outlawed) mercury battery. Leslie suggest to just shoot manual using Summy 16! The camera features a 45mm f/1.9 lens and a Copal-SV shutter.


Not to be outdone, Dane shows off the all aluminum Kodak Signet 35, a beautiful piece of 1950 design with a 44mm f/3.5 Kodak Ektar lens, and requires no battery. However, even after cleaning the rangefinder, the focus is so faint that you’ll have to guess focus. Dane’s secret is to set the camera up and shoot it like an old “box camera.” Dane mentions he loves these self-imposed limitations, he doesn’t have to worry too much about settings, but can just get out there and shoot.

Another one of Leslie’s camera catches Mike’s eye - the tiny Rollei Prego Micro, her Italian sports car as she calls it. This lovely camera fits in almost any pocket. But the real selling point is the lens; it can work in three ways. The first is a regular 30mm, also a masked ‘panoramic’ mode, and then a proper 24mm ultra-wide mode. The camera is basically the same as the Rioch R1 with a different faceplate and lens label.

Little did we know!...Mark Dalzell is Bond, James Bond!

The gang takes a break from all the camera talk for some vodka martinis, shaken, not stirred (not really) to discuss a possible James Bond connection to The FPP. Leslie shares the same last name as Bond Actor George Lazenby (played the title character in On Her Majesty’s Secret Service) however, Leslie informs the group that there is no actual connection. Mark however shares the last name (and possible connection) with a British Naval Intelligence Officer and Commando from World War Two, Patrick Dalzel- Jobs, one of Ian Fleming’s inspirations for the James Bond character. If you look closely in From Russia With Love, you can see Sean Connery using a tape recorder disguised as a Rolleiflex TLR. 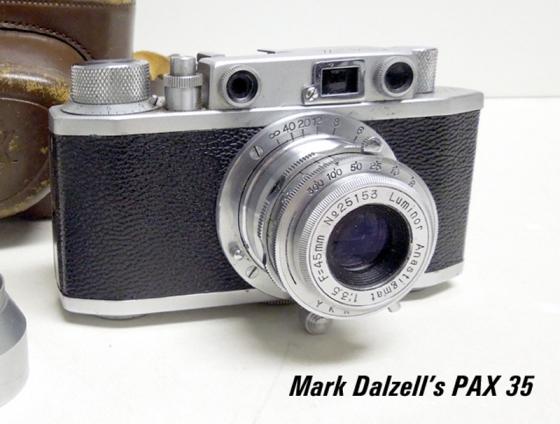 Back to the camera talk as Mark brings out a Japanese rangefinder the PaX 35. This odd little rangefinder was built in Japan during the 1950s. Rumor has it that it was built to be sold in the PX Stores at US Army bases (during the occupation of Japan following the Second World War). These aren’t rare, but it’s rare to find one that works. The problem is that the grease used to lubricate the lens movements, over time is hardens into a shellac like substance, Mark fixed it by soaking the lens in 99% alcohol for three weeks to get it working again! The camera itself features a 45mm f/3.5 lens that looks like it’s off of a Bollex 8mm camera and is basically a Leica Clone in its style.

With all these old cameras being passed around the group decides that modern cameras just don’t hold the same historical value as cameras from say fifty years ago. You don’t see much in the way of retro digital photography. There’s no story with them either -  when a digital camera gets old it gets tossed and replaced with the latest and greatest. But the old film cameras carry a story with them. The camera that grandpa used when he was overseas during the war, or your mom’s first camera.

It wouldn’t be a FPP episode without some mention of Polaroid and Impossible, listener Diamond writes in with a question about the Impossible film. He shot a couple frames of the PX70 ColorShade but they only came out an odd pink/brown hue, he asked what the deal was. Mike responded that this is what you get with the early Impossible stock -  unstable and very sensitive. The best thing to do is to pick up some of the new Color Protection stock, which is, the best film yet to come out from the Impossible Project. 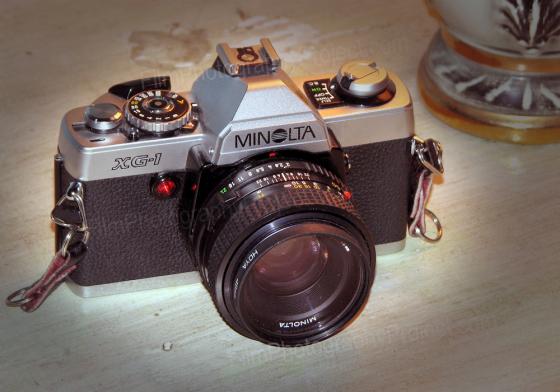 The giveaway for this month is the awe inspiring Minolta XG-1 with a 50mm lens and a proper flash. Sign up today in the Giveaways section for this beauty.

FPP Super Friend Tony Kemplin (Pho-Tony on Flickr) is the man behind the amazing 52 cameras in 52 weeks project (which is now on its 152nd week and still going strong). The project has given Tony an amazing knowledge of the odd and arcane in the camera world and allows him to become a regular contributor to the UK’s Amateur Photography magazine as a columnist. You can follow the 52 cameras project on his blog: http://52cameras.blogspot.ca/

That’s it for this shoe but don’t fret, the FPP will be back in two weeks (two weeks! You sound like a bird)

Michael ends the show by showcasing the musical talents of the FPP gang. First up is the latest tune from The Smoove Sailors. Then, it’s “I’m So Great” from uke player Henrique Couto. Frequent Smoove contributor Kilsy shows off her taken with a cut from her awesome album Bonita-O. Lastly, The Pink Delicates perform live in the studio with “The Captain” from their latest album “These Secrets.”