“What have they done to us?”
“How dare they change this tried and true developer - it’s been around nearly 60 years!”

In my opinion no developer I know of has been tested with more film types and with more dilution options than Kodak HC-110. So what does this new formula mean to us? All new tests for new times with all those dilutions and all those films? Kodak claims, no. The only difference is the viscosity, it’s easier to pour (the old formula had a syrupy consistency). If you check the MSDS** you will see that there are changes, but the final test for me was not to over analyze this and just run a quick test. All I wanted from this was what Kodak stated, no time differences, same results, easier handling, and a couple of years of shelf life. 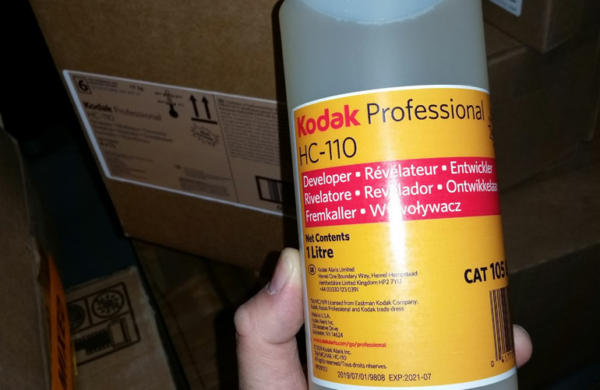 Here’s how I preformed the test, I shot two rolls of film, good old, never let you down, Tri-X in my Hasselblad 500c and a roll of modern T-grain TMX 100 in a Kodak Brownie Hawkeye Flash box camera. I photographed every frame on the roll of the same scene at the same exposure, so I had 12 basically identically exposed frames on each roll. I cut the roll in half and processed the first half in the new formula and the remaining half in the old formula.

I did the best I could with home processing to keep every aspect the same. I used a syringe for measuring the concentrate, used the FPP Heat Helper to heat a bucket of water up to a perfect 68 degrees and from this I mixed my dilutions right before each roll was developed.  I used all Paterson tanks and reels. My steps were as follows, 68 degree pre-wet for 1 minute, digital timer for the Kodak* recommended developing times, 5 seconds of every 30 for agitation, 68 degree water wash for the stop bath step, and Kodak regular fixer, at 68 degrees for 8 minutes, water wash 1 minute, FPP Archival Wash for 1 minute, 1 minute water wash, Photo Flo, squeegee, then hang to dry. I cut notches in the rolls before developing just as a secondary back up to which product I used. Single notch for the new and two for the old formula. 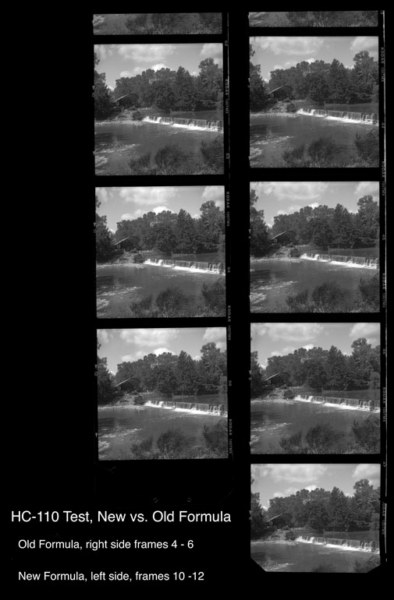 The results amazed me; they are exactly the same! Kodak promised “Same Great Results” and with this test that is exactly what they delivered. I also like the easier handling, referring to the product being less viscous, less syrup like. To measure out the product I used syringes, I feel they are more accurate than the medicine cup, but the pull on the smaller ones is strong because of the viscosity. If measured from a medicine cup you had to make sure all the product was removed from the sides of the cup with multiple rinses to remove the syrupy product from the sides. I still draw water in the syringe or rinse or the cup into the working solution but the new thinner formula makes me confident it all removed from the sides. 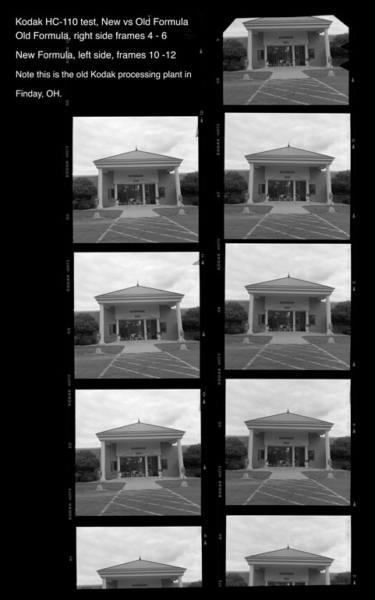 So, what is different? Many are concerned about the shelf life of the new product. Both new and old products have a “Use by” date of at least 2 years if stored in an air removed, tightly closed container. This has not changed. If you are getting times longer than this, great, but Kodak states it’s recommended use by date on each bottle and that is all I expect from it.

I don’t know the reason for changing the formula, economics, environment, but it’s not the first time it has been changed.  For my use I like the changes, it is a little easier to handle and the fact that my negatives look the same as expected is great. Don’t get the developer sweats, just use it with all the confidence you always had with HC-110, and if you are concerned about its long term keeping qualities just shoot more film!

**A Material Safety Data Sheet (MSDS) is a document that contains information on the potential hazards (health, fire, reactivity and environmental) and how to work safely with the chemical product.

Buy your HC-110 and other photo chemistry from The Film Photography Project On-Line Store!

Leslie Lazenby fell in love with photography when she was given her first camera, a GAF 126, at the age of 10.  Her first job in a camera shop with a custom and commercial photo lab turned into a 20-year adventure in film; leading to positions in darkrooms, customer relations, and as head of purchasing.  For the past 15 years, Leslie has owned her own business, Imagine That, retailing traditional photography products, photographic restoration, custom printing and video conversions. She finds her Zen next door at her studio, the Mecca, where she plays with her film cameras, processes film and holds small classes focusing on teens and young adults. You can hear Leslie on The Film Photography Podcast! You can find Leslie's photos on her FLICKR account!