For those who grew up during the heyday of Super 8 home movies, you probably remember Christmas mornings very differently than the youth of the 90’s and beyond. Trying to open your gifts while being blinded by what felt like a tiny electric version of the sun. Ah yes—the movie light. This small torture device--by today’s standards--was used for indoor movies before the advent of high-speed movie film and video cameras. Because film speeds like Kodakchrome 25 and 40 (along with others) were so low, bright and hot movie lights were used to illuminate all those special indoor occasions, much to the fright of little Johnny and Suzie.

Eastman Kodak set out to change all that in 1972 with the introduction of two new products: the Kodak Instamatic XL Super 8 movie camera and newly engineered high-speed Ektachrome-G 160 movie film. The XL stood for ‘Existing Light’ and Kodak touted that the cameras, when used with the new Ektachrome stock, didn’t need the help of movie lights when filming indoors. This new system was considered revolutionary, as now movie cameras could film in conditions indoors and during evening hours at night which were previously near impossible to capture.

The two cameras that were introduced, the non-zoom XL-33 and the zoom XL-55 were uniquely designed to resemble binoculars, allowing the shooter to hold the camera steadily with two hands. The lenses and the internal mechanisms were different than any other Super 8 camera on the market, and featured an f-stop of 1.2 along with a shutter open angle of 230 degrees. These two features are what gave the XL’s their capability to shoot in such low-light conditions.

My first experience with a Kodak XL-55 was in 2003 when a friend of mines dad projected a film he made in his college dorm during the late 1970’s. All the Super 8 films I had seen that were shot indoors, always featured that bright white light, blinding subjects’ faces. So I was totally amazed to see that he filmed it indoors and at night with no issues of lighting and no squinting subjects.

When Kodak announced it would be returning Ektachrome later this year (though it’s highly unlikely the Super 8 offering will the 160 ASA of yesteryear) I decided I wanted to find me a XL-55 in anticipation. I searched around the ‘bay to find one and I was spoiled for choice—they were plentiful and cheap. So I got one.

When it arrived, in its original box with instructions, I loaded the 4 AA batteries in the compartment and pressed the button. It sprang the life and looking through the huge TTL viewfinder, the zoom feature buzzed back-and-forth. And then all of the sudden—nothing. Within a few seconds, the camera just died. The motor hummed away but nothing seemed to be moving. I was stumped. 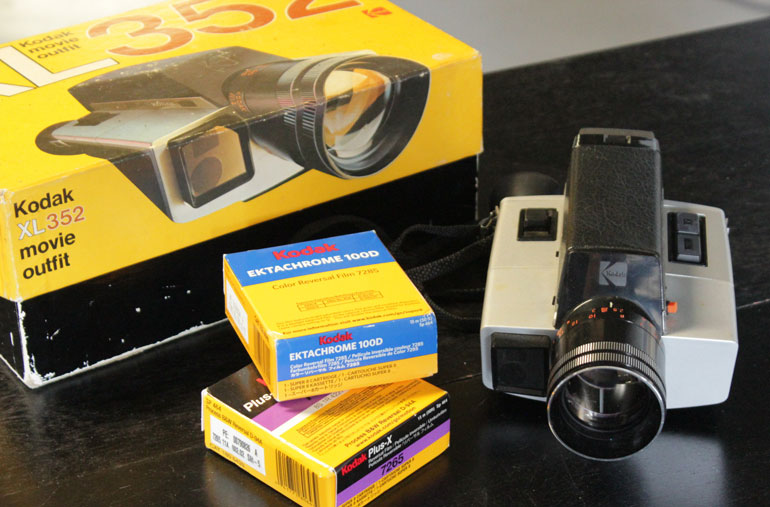 I chalked it up to just a bad camera, and considering I only paid around $7.00 for it, I just decided to get another one off the ‘bay. A few days later it arrived. I loaded by batteries and away I went. Until it happened again. The camera just died.

I began searching around online for answers and then they began pouring in. The Kodak XL’s—all of them—featured a faulty plastic motor gear. Over the years, the cheap plastic begins to degrade and eventually becomes so brittle, it literally falls apart upon operation. In fact, a few people online complained that when they bought the cameras new in 1972, they had a similar problem after just two years.

Sadly, this means just about every Kodak XL movie camera will fail. Every model ever made was installed with these cheap plastic motor gears.

That means that unfortunately, unless someone comes along to make a replacement, these beautifully made (some argue the best Super 8 cameras Kodak ever made) will just have to remain on your display shelf.