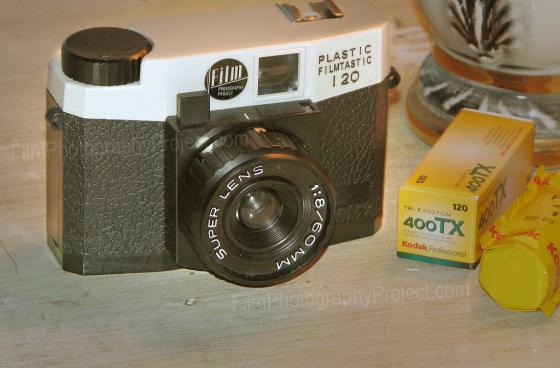 By way of complete disclosure, I first have to say that I like plastic cameras! In particular I find the softness, distortion and flare from a plastic lens highly appealing.

So I was intrigued when FPP announced the availability of the “Plastic Filmtastic 120” Debonair camera, a literal boatload of which FPP’s Michael Raso purchased out of a mysterious warehouse in Rochester, New York and is offering for sale through FPP On-Line Store.

My own Plastic Filmtastic 120 Debonair soon arrived and took its proper place alongside the Holgas and Dianas in my small Pantheon of Plastic. It didn’t sit there long, though, for I quickly had it loaded and out for a shoot.

Comparisons between the Plastic Filmtastic 120 Debonair and the now ubiquitous Holga are bound to arise, but I find the Debonair has more in common with the celebrated Diana line of toy cameras.

For example, the Debonair is about the same size and weight as a Diana. That is to say that it is smaller and lighter than a Holga. And it shares some design characteristics, too: the flexible, free-floating tangs that support the film spools are the same as on a Diana, and the latch on the underside that locks the back in place is also the same.

This latch design, by the way, has been cited as a cause of light leaks in Dianas so it may bode well for those of you who are connoisseurs of that look. I must add though that my particular Plastic Filmtastic 120 Debonair does not leak light. Not yet anyway. Nevertheless, I’m thinking the design similarities may be evidence of a shared Debonair/Diana ancestry. Or copycat engineering! No matter, I see only positives in this.

The 60mm “Super Lens” provides an aperture of f8 and three focus positions: near (indicated by a tiny image of a human head in profile), middle distance (designated by an image of what appears to be a human family of three) and far (symbolized by what looks like a miniscule image of a mountain). Minimum focusing distance is 5 feet, according to the instructions that come with the camera.

The only other adjustment available is a sliding switch on the lens housing that toggles between sunny or cloudy/flash. It’s intended to modify the shutter speed. Educated guesswork by the FPP crew suggests 1/100th and 1/60th as the two shutter speed settings. However, on my particular Plastic Filmtastic 120 Debonair I can discern no difference in the sound of the shutter, or in the look of the light coming through it, regardless of the setting.

You can mount a flash on the accessory shoe of the Plastic Filmtastic 120 Debonair. I haven’t shot with flash yet but a post I read on Flickr reported that the flash only fired when the shutter was set for cloudy/flash. And indeed, this observation would be supported by the instructions that come in the box, as they recommend adjusting the shutter to this position for flash photography. However, a quick test on my own camera proves that it will fire the flash with the shutter set to either position.

Out of the box you have no provision for long exposures with the Plastic Filmtastic 120 Debonair. Nor is there a tripod mount. However, there is some discussion (and pictures) of modifications for a tripod mount on the Debonair Flickr group (See the link below.) Can a “bulb” mod be far behind?

Simpler mods, such as shooting 35mm with the Debonair, or adding filters, can be found on the FPP Flickr group.

The images
The Plastic Filmtastic 120 Debonair gives you sixteen 4.5 x 6 cm images to a roll of 120 film. The pictures are portrait format, so if you want an image in landscape mode you have to turn the camera 90 degrees and shoot.

By the way, do you like dark corners? The Plastic Filmtastic 120 Debonair excels in the art of the vignette. Indeed, on some shots it’s like you’re peering through a tube.

With my camera the negatives tend to have a wandering edge. In other words, they’re not a true rectangle.


And, as you’d expect from a toy camera in the Diana category, the images are soft, and get softer toward the edges. The lens is certainly capable of the dreamy qualities the lomo folks value so. Colors pop nicely, though, and to my eyes accurately.

Portra 160 and Ektar 100 both gave me pleasant pictures. Black and white can be outstanding in my view. I’ve shot one roll so far. It was Fuji Acros 100 which I processed in Rodinal. I was delighted.

Does this world really need another Diana clone?

Let’s put it this way, at $19.99 from the FPP store it’s a third less than you’d pay for a Holga 120N and less than half what a new Diana would cost you. And yet, you’ll get image quality that rivals and in some instances may even surpass those of its plastic cousins.

All photos shot by Brian Moore on the FPP Debonair

Get your FPP Debonair at The FPP Store! - https://filmphotographystore.com/products/120-film-camera-fpp-debonair