Our modern film developing tanks are referred to as "daylight" tanks, meaning once the film is loaded in total darkness and the proper lid is attached you can then turn on the lights and process your film. Typically the lids of the tanks have light tight baffles and the chemicals swirl, twist and turn around all these little corners and finally come into contact with your film. Previously you would have used open trays, hangers that are transferred from one tank to the next chemical step tank and even little dip and dunk type units that you had to hold each end of the film and with an up and down monition moved the film through the chemistry. Eventually even sheet film  had daylight tank systems, but they still required a total darkness time to load the film on to the reels. True daylight tanks, requiring no dark time were made by Eastman Kodak, Brooks and without a doubt the most successful was the Agfa Rondinax tanks. 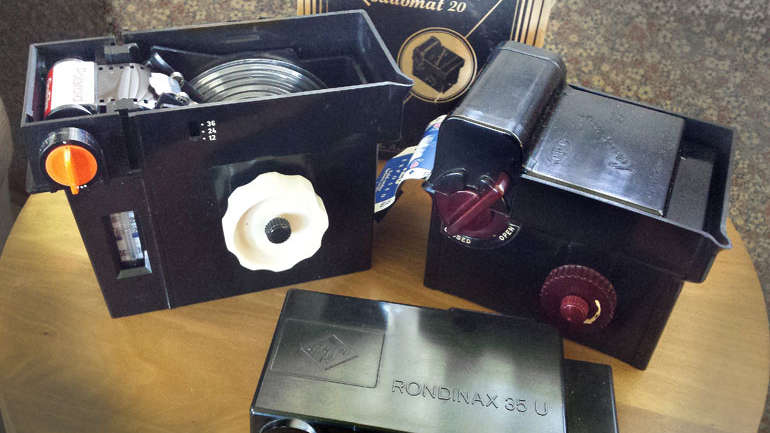 On a previous Film Photography Podcast, I had given the Kodak a less than favorable review, in fact I never got the darn thing successfully loaded. The little Brooks unit looks like a little pepper mill with the grinder attached. It is a clear unit and develops the film inside the original cassette. I have used it, it is a bit fiddly to get it loaded but I was successful in using the unit. It's limitations are many.  It only recommends rolls lengths of 20 exposures or shorter and you must use a monobath for your chemistry choice. The 20 exposure or shorter recommendation is due to the amount of space inside the cassette. If you use a longer roll more space is taken up by the film and there is less room for chemistry. I was testing my monobath version at the time and it mated well with this unit.  There were a few serge marks and undeveloped areas and that keeps me from recommending it as anything other than a novelty. Think about how amazing these daylight monobath units would have been; shoot a major event, process it in the car on the way back to the newsroom and have the negs ready to print before you got in the door. Your editor would love you! Today Brooks Pixmats can be found on cheaply on ebay. 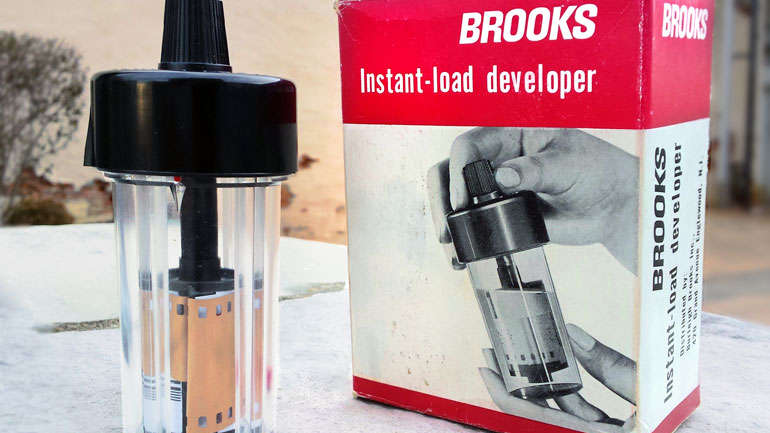 The true winner and champion of daylight film tanks were the Leitz Agfa's Rondinax made for either 35mm or 120. Many, many years ago someone gave me one of these to try. I had processed with the usual Paterson style tank and automated equipment at work. These tanks claim full daylight handling, no dark required even to load the film on the reel. SAY  WHAT, no darkroom, no changing bags or no under the bed covers? That's what they said. I had been warned by the senior darkroom operator that they leaked and just didn't work well and he wouldn't waste the time in using it. I showed him my already processed negatives and the conversation was over. Like many things that little tank got lost in moves and I simply used the above mentioned equipment for my later and current film processing.

The 35mm tanks work by trimming the tail like you do for any reel, opening the lid, place the cassette in a chamber, attach the pull strap and close the lid. You advance the film onto the reel with a knob on the side of the tank. Once you feel the end of the roll you slide up the built in cutter bar and a few more turns completes the loading. The chemistry goes in the top and pours out the same way. You must continuously turn the knob and spin the reel during the entire process due to the fact that this tank only takes 7 ounces, 200 ml, of chemistry and the film reel is only half submerged at a time. It had been about 25 years since I  processed a roll of film in this kind of tank and boy oh boy what fun.  The results were perfect negs.  There are some really neat features to this system. First as mentioned you only need 7 ounces of chemistry, you never touch the film, there is a built in thermometer on the side of the unit, you do not need scissors to cut your film, or an opener to pop the end off and you can load the reel wet and at no time is darkness required! I gave this tank a real test with four rolls of Svema 200, that super thin, super strong polyester based film. I usually bulk load this film in 24 exposures or shorter due to the difficulty in loading this onto reels and those reels MUST be dry or ARGGGGG film sweats and cursing. I processed one roll after the other with no downtime in-between except to wash the tank and reel under running water. I could not believe the the second roll of this super thin film loaded without a hitch, perfect. The disadvantages of this unit, you can only do one roll at a time and you must have the tail out of the cassette to load. The 120 tank is even more magical, you rest the exposed film in the top of the tank and pull enough paper out of the tank and close the lid. You then open an internal chamber via a knob on the side and pull the paper out until it stops. The film has gone into the chamber, close it via the knob and take the lid off. Remove the paper from the very end of the roll which is sticking out of the light tight chamber. Clip on the strap and close the unit up. The rest of the procedure is the same as the 35mm tank. Amazing. I did a few dry runs with a scrap roll and it works smooth as silk.

Currently the tanks show up on ebay about 10 or 12 at any time for the 35mm version, the 120 version are a lot less common. I will warn you ahead of time be prepared for sticker shock. It sold new in 1956 for 24 USD, Today it is not uncommon to sell for 75 USD and the 120 version 75 USD to 225 USD! My 35mm tank came from FPP super pal, Amro Gebreel in the UK, he graciously sent me one of his not only to try out but to keep. FPP has the most awesome listeners.  I stole the 120 unit off ebay for 50 USD, it is a off brand. If you do get one and there is no instruction manual, fear not you can find it on the web. Without meaning to be, the manual is hilarious. If you ever get a chance to use one of these do so, they are fool proof and incredibly fun. I wish someone would manufacture them again, for a first timer or running a small batch of film the results could not be easier for perfection.

Thanks to Amro Gebreel for feeding the fire with his generous gift.  Also to Malcomb Peaker who owns the website https://rondinax.wordpress.com/  His website and YouTube videos have been so valuable to my research and use of these daylight tanks.