Love for the The Kowa Six 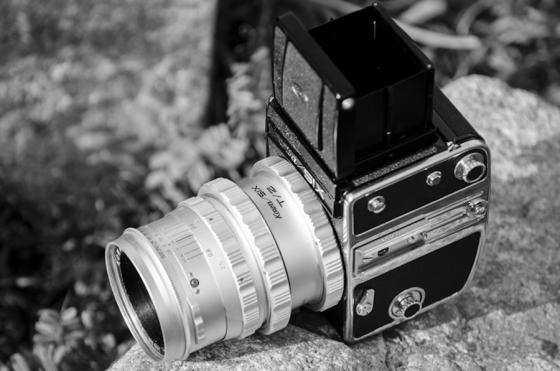 I’d like to introduce you all to one of my favorite cameras – the Kowa Six!  The Kowa Six takes 6x6 photos on 120 or 220 film.  They made three versions of this camera; the Kowa Six, the Kowa MM, and the Kowa Super 66.  The first model was launched in 1968 and the line ended with the Super 66 just six years later.  This system had to compete with Hasselblad quality on the high end and Bronica’s lower cost on the other, and the first models did not have interchangeable film backs.  A combination of poor marketing and brand loyalty may have played a part in the short life span of the Kowa line.

The Kowa Six has a really unique design.  The MM version added a multiple exposure switch and mirror lock capability.  The Super 66 has removable backs (6x6 and 6x45) as well as a Polaroid back.  The waist level finder slides out forward and can be exchanged with a 45 or 90 degree prism or a chimney finder that has a light meter, though I’ve never been able to get mine to work reliably.  I use a hand held light meter as it’s much more accurate anyway, but I prefer using the prism as my eyesight isn’t so hot anymore and it blocks out more light.  One of the nice features of the Super 66 is the interchangeable backs, so there’s no need to move the 45 or 90 degree prism to open the back.   If you use a tripod, you have to use a special tripod plate if you want to open the back without taking the camera off of the tripod.  Ross Yerkes has some of these for sale.  If you don’t have one, just take it off the tripod between rolls.

It’s a leaf shutter lens camera, meaning that the shutter is in the lens and not the camera body.  One advantage is that it will flash sync at any speed.  This is huge compared to most cameras of this era with sync speeds of 1/60th of a second.  You can use ‘mirror lock’ on the MM or Super 66 and the self-timer for macro shots where you want minimal vibrations.  These have very little vibration handheld and good mirror dampening, and the weight help too.  The leaf shutters have three settings built in to the lenses - M (flash bulbs), X sync (flash strobe) and V (a self-timer of roughly 10-12 seconds).  The camera uses a non-instant return mirror, so you have to advance the film by turning the knob before you will see through the lens again.

The Kowa Six, MM and Super 66 all take left handed grips that insert into a bracket on the left side of the camera.  These grips have a cold shoe flash mount and a chrome button to release the shutter that can also lock to prevent accidents.  I always use the grip with mine unless I’m using a tripod – it makes it easier to carry and makes handheld shots a breeze.

The most popular lenses are the standard 80mm f2.8, the 150mm f3.5 and the 55mm f3.5, which translate roughly to a 50mm, a 75mm and a 28mm in 135mm format.   There is also a very rare and wide 19mm f4.5, 35mm f4.5, a 40mm f4, a 110mm f5.6 macro lens, 200mm f4.5, a 250mm f5.6 and a 500mm f8 lens (also extremely rare).  The standard lenses are pretty cheap compared to other brands in their class and they are extremely high quality.  A quick search on flickr or google for photos taken with any of these lenses will give you a good idea of their sharpness and great reputation.  The lenses come in chrome or black versions, and aside from the chrome being slightly older and some variation in filter sizes, there isn’t much real difference between them.  Some people avoid the black 85mm due to reports of back focusing, and I use a chrome 85mm for this reason.

Shutter speeds range from T, 1 – 1/500th of a second.  There is no ‘B’ setting, so to get around this you use the ‘T’ setting, which is not really a shutter release.  It opens the shutter but it must be closed by gently turning the shutter speed ring.  I just cover the lens with a dark cloth before I touch the ring to avoid camera shake.  The camera is easy to load – be sure you line up the start arrow with the black dot on the side of the film chamber before you close the back.  Then crank the knob forward gently until the number ‘1’ appears in the counter window.  I recommend using the knob to advance the film and not the winder arm as it can crack or break under pressure.

The Kowa cameras have interchangeable focusing screens ranging from matte, horizontal prism and grid, and these are fairly easy to find on the bay if you’re patient.  In general, don’t expect to find much Kowa Six gear out there – it was a short lived line of cameras that was not produced in great numbers, and some of the lenses like the 35mm or the 40mm are really hard to find.  Accessories include a very useful focusing lever (similar to the Hasselblad style), three different extension tubes for macro work, lens hoods, a bellows system, a sports finder and some other gadgets.  You need to use a Kowa strap with it because the strap lugs are one-of-a-kind as far as I know.  Some of the Optec straps might work but I haven’t tried it.  I use an extra wide strap attachment that you can add to the thin straps by wrapping them around it with Velcro – they sell them everywhere and your shoulder will thank you for getting one.  The cameras are a bit heavy, but not quite as heavy as a Pentax 67.  More like a 645N.  I find that the quality of the lenses, sharper photos and the square format more than makes up for the weight.

You should be able to pick up a nice Kowa Six body with an 85mm lens for around 250 to 400 dollars, sometimes much less depending on condition and luck.  Just be patient and do some research before buying one.  Download the manual and when you shoot with it don’t force anything on the camera.  When you advance the film, do it slowly and gently.  As Mike says, ‘no violence’ – or if you prefer Lezlie’s motto, ‘it’s all about the love’.   I recommend having it mailed directly to a serviceman for a CLA before you even see it. 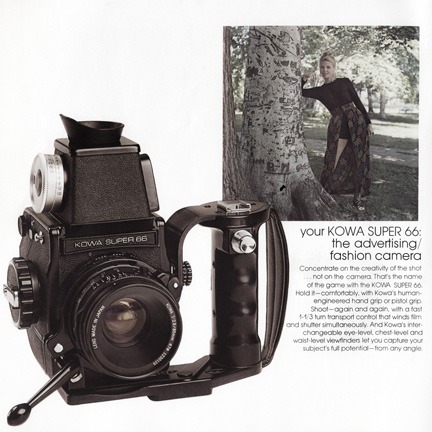 I’ve had all of my Kowa bodies and most of my lenses CLA’d and have never had any problems with them.  These cameras are forty years old.  You wouldn’t expect a 40 year old car to run well without even giving it a tune up first, right?  The small extra cost is worth the lack of frustration in the future.  I can recommend two repairmen, Ross Yerkes at (323) 256-1018 or yerkescamera@aol.com.  Another is Mike Jenkins at (503) 236-6109 or NEDSNAKE@msn.com.

Mike Sherman is a long-time FPP podcast listener. His images can be for on Flickr here.