When photographers mention the word “Leica”, many – photographers and non-photographers alike – imagine a rangefinder camera quietly “shinking” light to emulsion to record a moment in time.  However amidst the rangefinder M's and Leica Thread-Mounts, the Minolta-influenced (R3 through R7) SLRs, and the more contemporary R8 and R9, Leica produced the “Leicaflex”, a series of three R-mount cameras from 1964 to 1976.

The cameras, which combined Leica's reputation for optical precision, the build quality of the M3, and the compositional ease that an SLR affords, were iconoclasts in a time where photographer amenities such as through-the-lens metering, lighter-weight materials, interchangeable focusing screens and prisms, were rapidly becoming en vogue.

The original Leicaflex, introduced in 1964, could best be described as a Leica M3 with a reflex system, a mirror, and a rudimentary meter that only metered in any way near correct between 28mm, metering much of the exposed area; and 90mm, effectively a spot meter.  It's distinguished easily by its “eye-patch” which holds the battery for the metering system.  Within this incarnation, there are two versions. Version I is distinguishable by its “pie-shaped” exposure counter and screw-in tripod mount, while Version II is distinguished by the round exposure counter and integrated tripod mount.  As Japanese competitors integrated “through-the-lens” (TTL) metering (the Nikon Photomic T and the Canon Pellix), Leitz released the Leicaflex SL (1968) with included TTL metering for more accurate metering of the photo (the SL, meaning Selective Light, denotes this feature).  Additionally, with a microprism focusing screen, the SL has earned a reputation as a fantastically tactile, user-friendly, and complex (more on that later), camera with a massive and bright focusing screen.  The final incarnation, the Leicaflex SL2 (1974), introduced a second battery, to be put in below the flash-plugs on the front of the camera, to power an increasingly complex meter.  The SL2 however, has had its reputation tarnished somewhat by shutter problems at 1/2000 second, small concessions to Minolta such as reshaped mirrors for lenses, which have caused some lenses to be incompatible with earlier Leicaflex models unless said lenses are modified.  The SL2 spelled the end of the “Old World Leica SLR”, as its cost to produce and sell nearly bankrupted Leica and served to catalyze Leitz / Minolta's almost 20 year partnership (1971 to approximately 1990). 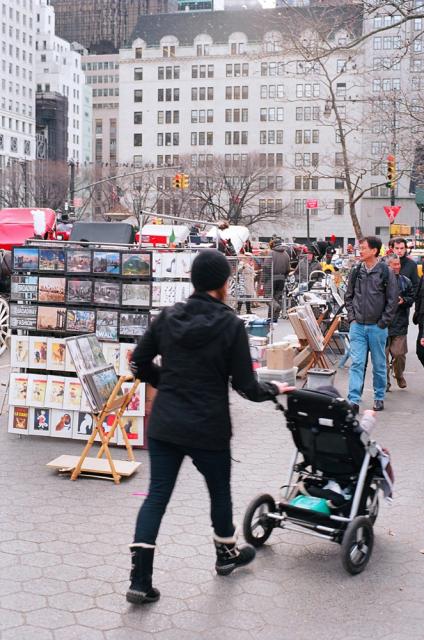 With the Leicaflex SL, street photography becomes a bit of an issue due to its robust mirror structure, which lets off a quite audible “clap!” upon exposure – resulting in people looking to see what caused that noise.  However, it is great for scenery and architecture photography due to its weight, focusing precision, and most importantly that it does not impede the photographer's vision with automated computer judges 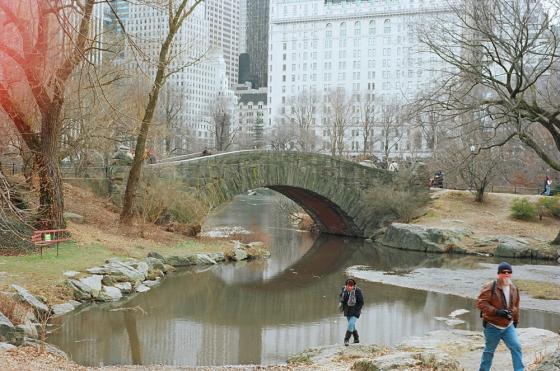 With a dial that allows for continuous shutter speeds between 1 Second to 1/2000 second (except for ¼ to 1/8 second and 1/30 to 1/60 second), and aperture detentes at half-stop increments, it makes it easy to precisely align the match (which moves as you change aperture and shutter speed) with the needle (which moves to tell you where your “aperture and shutter speed” combo should add up to).  It's a very intuitive system that allows for both rough metering as well as fine-tuning for nature scenes.  Once everything is set up, if you want to see what will come out in focus, simply push the “stop-down” button near the timer lever for a preview – albeit one that shows up much darker in the viewfinder than when the lens is wide open.

The ergonomics of this camera however, are nothing short of spectacular, considering the mass of a body and the standard 50mm f/2 Summicron Mark I (Production: 1964 1977) that compiles a kit.  With a body that weighs 880g and a lens that weigh another 650g, all that mass that makes one's neck cramp when walking around with it all day, is the same mass that allows for 1/30 second shooting when otherwise 1/60 would be required; in effect, its mass acts as a dampener against mirror shake.  In-hand, the uncluttered placement of shutter-speed dial integrated with shutter-release button, the rewind dial integrated with the ISO-setting dial, and the sparse placement of buttons and levers allows for not only less “what did I just change” problems, but allows for the hand to grip the camera's vulcanite covering without feeling cramped or feeling as if the self-timer lever or stop-down button was trying to find away to impede capturing the image.  The only downside to this lack of clutter in the name of “ease-in-hand” is that opening the film-back is unlike almost any other camera I've owned or seen.  Rather than pulling up on the rewind dial, or opening a door on the bottom to remove a bottom plate or the entire back a la Leica M3 (bottom plate) or Nikon F (removal of the back of the camera), the Leicaflex SL has to be opened by pushing a small button on the side of the camera and pushing upwards a lock-bar.  Doing this allows for the door to open to load / unload film.  It's a very secure system, but it takes a bit of learning to remember that the rewind knob does nothing but rewind. 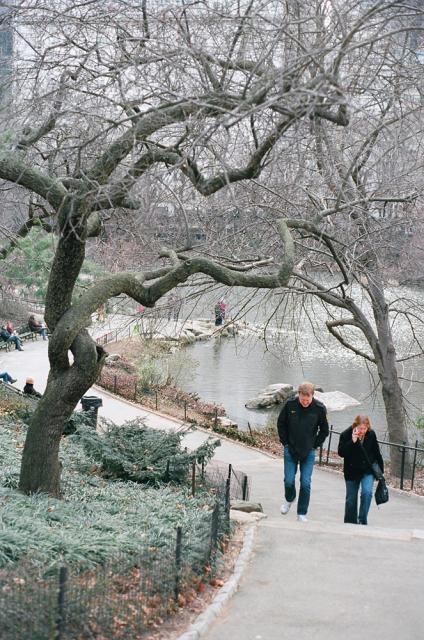 The standard lens, the aforementioned Summicron, is a study in precision, not just in focusing ease, but how tight one can focus.  Having over 270 degrees of focal throw allows for very precise focus from infinity to 0.5m, but the length of the throw often means that focusing on a stationary subject or composing a portraiture is a lesson in precision and wrist flexibility.  It's nearly impossible to quick-focus this camera to capture impromptu moments, and should you need to rapidly focus for a streetshot, it's best just to zonefocus and hope it's somewhat in focus.  There's just too much throw in the lens for it to be a good street photographer's lens, at least to me.  Shooting posed objects, sceneries, architecture, and other stationary objects, it holds well because of the ability to be precise during shooting. 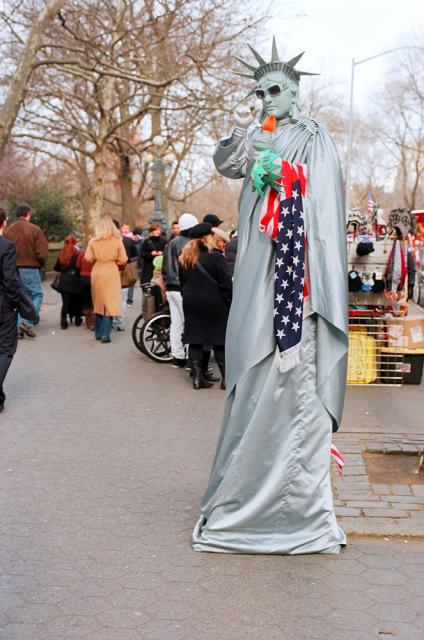 However, the Leicaflex SL – and all Leicaflexes for that matter – possess a very anti-professional feature that its contemporaries from Nikon and Canon possessed.  Perhaps attributed to the German ideology of “perfectionism gone ballistic”, the Leicaflex lacks any ability to change the prism, and for all intents the focusing screen (although some repair shops will change the screen at user request).  Leica, after building a prototype Leicaflex with interchangeable viewfinders and prisms, perceived such allowances as a means of allowing dust into the viewfinder and compromising the ability to shoot acccurately.  I must agree with this.  Of all the SLRs I own, the Leica is the sole camera that doesn't have dust problems, although I don't find the dust problem in my Nikon F3HP to be egregious either.  It takes all of one to two minutes to remove the prism and the focusing screen, shoot a poot of compressed air onto them, and reassemble the screen and prism back into the camera.  Leica's alternative, a sort of inverted periscope that mounts to the eyepiece where diopter lenses would go, is a viable one... albeit one that interrupts the aesthetic of the camera more than having interchangeable prisms.  (And that's a shame because a waist-level viewfinder would afford this camera the ability to do street photography without drawing undue attention to the shooter or the camera.)

A small bit of advice when buying this camera.  I cannot stress enough the importance of buying from a dealer with a reputation in Leicas.  Although sites may sell Leicas on the cheap or advertise them as gorgeous, the Leicaflex – as with most German cameras – is terrifyingly complex.  Additionally, it was considered a “professional camera”, with a “MOT” variant made for the SL and SL2 that accepted a motor that used 10 AA batteries.  Many of these cameras were used as tools by professionals and then dispatched to the second-hand market when the ability to write-off the value disappeared.  That doesn't mean that you should avoid the Leicaflex family, but that you should approach it cautiously and with the knowledge that it may require recalibration, new meter, a conversion and circuit recalibration to modern 625A batteries (recommended since air-cells only last a few months and once the air-tight seal is opened, decay can be as little as 6 to 8 weeks in this camera).  My advice when purchasing one (and making it an excellent user camera, since it is amazing at what it does) is the following.

• Buy from a reputable dealer who concentrates in Leica.  Yes you may spend a little more, but most reliable dealers will warranty the camera against defects should any immediate ones arise.

• Just because it looks shiny on the outside, doesn't mean it actually is on the inside.  The Germans, when making SLRs, had a reputation for incredible complexity and there may be small parts that have either broken, or are on the verge of breaking.

• Allocate at least $200 for a body, $500 for a good 50mm f/2 Mark I, and another $300 to $500 in the event it needs cleaning, lubing, calibration.  A full overhaul with new or reconditioned parts can easily push the repair bill towards, and possibly over, $1,000.  There are bargains in bodies, especially with the relatively abundant Leicaflex SL, but money saved in the “bargain bin” can be easily lost several times over in added repair costs.  Also, for the Leicaflex SL, have the plastic lens release button changed to a metal one.  It will save you a great deal of agony, as the plastic release button is notorious for breaking off the camera.

• Have the camera converted to take modern 625A batteies instead of the air-cell Weins.  Mercury batteries are banned in the USA, and the Weins vary wildly in battery life.  Battery life can be further extended by keeping the film advance lever in, which keeps the meter off.

• Greatest lens compatibility: Leicaflex SL2.  It is compatible with all R-lenses ranging from the original 1-cam lens, to the final-generation ROM-lenses, with few exceptions.

• Most robust build: Original Leicaflex (Mark 1).  The first 5,000 of these cameras also have the film plane area surrounding the shutter held in by an additional four-screws.  All parts are individual, much fewer“unibody” components for components such as shutter mechanism and brake, relative to subsequent Leicaflexes

• Best all-around shooter: Leicaflex SL.  Combines through-the-lens metering as well as a very bright microprism screen for focusing, with much of the tank-like build of the Original Leicaflex (Mark 2).  Also the most plentiful with over 80,000 produced, so the odds of finding a very nice one are higher than the other two variants.

Jason Ganz is a graduate student at Brooklyn College majoring in Political Science and enjoys shooting cityscapes, street photography and automotive photography.  His first step into manual photography came at the age of 14 when he received a Vivitar V4000 K-Mount SLR for summer camp, and he has been shooting vintage 35mm SLRs ever since.  When not focusing on film photography, Jason enjoys engaging in political discourse in international relations, local and state policy, and economics, playing guitar and piano, and going to New York Yankee games.  Check out Jason's photography at http://www.flickr.com/photos/ganzonomy