66 years after Dr. Edwin Land amazed the world with instant photography and 6 years after Polaroid closed their last factory, a new instant camera has been designed by Dr. Florian ‘Doc’ Kaps and Achim Heine. All 500 of the limited run cameras are hand assembled and hand numbered by Supersense. 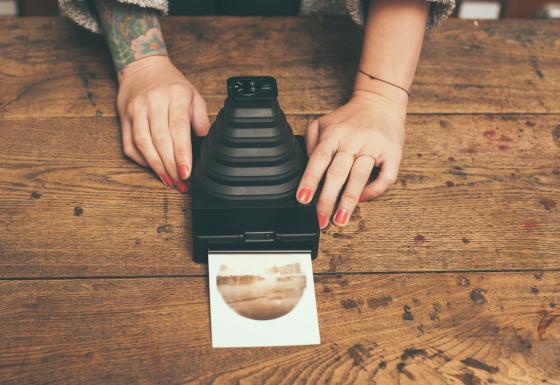 The camera features a three-position turret style lens with two apertures, 0.12mm and 0.24mm and the closed position. The overall slim design makes it a breeze to pop in your camera bag, barely taking up more space than a couple of packs of film. I have used many handmade pinhole cameras and appreciate the addition of the metal tripod socket for the stability and functionality that it affords. The bellows expands out 5 levels and easily stops at the level of wideness you choose, from normal wide when fully extended to crazy wide when fully compressed. The film chamber and eject is based upon the Film Processing Unit (FPU) of the Impossible Instant Lab. I found the build of the camera to be excellent and solid. 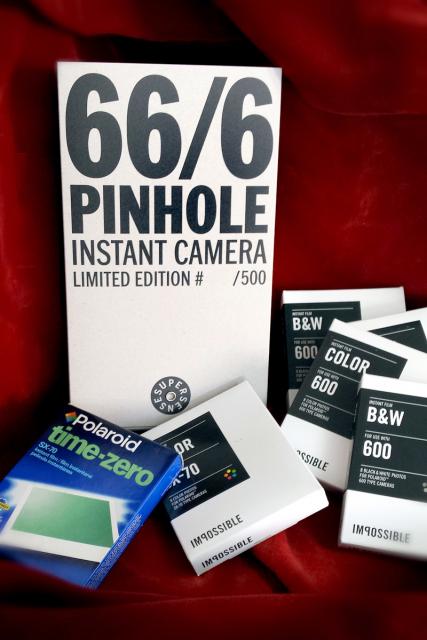 I love pinhole cameras, I love super wide lenses, and those who know me know of my love affair with instant photography so I could not wait to get shooting.  First there were a few things I had to prepare before I could burn some film. While my Impossible film was coming up to room temp from it's cool storage I familiarized myself with the quick start guide included with the camera. As per recommendation I downloaded the app Pocket Light Meter from Nuwaste Studios to my smart phone, the cost was minimal, 99 cents. Even though a charged battery is not needed to expose an image, it's a pinhole for crying out loud, it is needed to eject the pack cover and film. With the cord provided plug the camera into a powered USB port to get it charged.  Now let's get shooting.  I loaded it with Impossible Project's current B/W for 600 type cameras and hit the streets. Remember to take your smart phone, tripod and plenty of film. 600 B/W is excellent for your first images as it comes up in about 10 minutes.

The set up for the first shots seemed rather laborious compared to my usual pinhole practices. Select the bellows compression, your aperture and mount the camera to your tripod. Now use the Pocket Light Meter app and set the film speed to 640, f/stop to 57 and read out the shutter time. To find your exposure time multiply your app's shutter time according to the guide on the back of the camera. There is an adjustment for each aperture and compression combination. I tried to work with daylight to keep my exposures under 30 seconds, over that and you need to be aware of reciprocity issues. Using the calculator and stop watch apps included on my smart phone saved me from taking additional equipment.

My first exposures were very precise with camera choices, exposure calculations etcetera but I was feeling my creativity was being bogged down by all the technical that had to go into each image. I was not overly successful with my first images. I finally settled down and used this pinhole camera more like I would treat a traditional pinhole camera. I chose a very continuous light day, no sun ducking in and out, and that kept my lighting smooth and even. I had my phone with me but decided not to use it. I chose two compression on the bellows, and an aperture of 0.24mm and kept those as my constant. My first exposure was 5 seconds counted in the tradition of 1000 one, 1000 two, etcetera and adjusted my exposure to 4 seconds. I shot the rest of the day this way and had my most successful images. As with anything that has variables, keep all but one consistent and your success rate is assured. I had conquered the 66/6.

As a final note my wish list for this camera would be to have a more in depth instruction manual provided. I had never worked with the Impossible's FPU and didn't realize it needed charging, I assumed the pack batteries were used for ejection. #1 on the quick start guide should have been "Charge the camera." #2 on the wish list would be a frame counter.


I am sure you are all wondering about the Clint Eastwood's Dirty Harry reference in the title, it came about noting the camera's lack of a frame counter. With all the excitement and just grab times to shoot I could never remember how many images I had remaining in the pack. I repeatedly had this going through my head, "Did I shot 7 frames or 8, well to tell the truth in all this excitement I kind of lost track. But being as this is a 66/6 Pinhole, the newest instant camera in the world, I had to ask myself do I feel lucky, is there one more frame?" Yes I felt very lucky..... and thankful to Supersense for sending one of the fabulous 500 66/6 to experience and I truly appreciate this opportunity. If you love wides, pinholes and or instant imaging you best hurry as these 500 will not be around long.