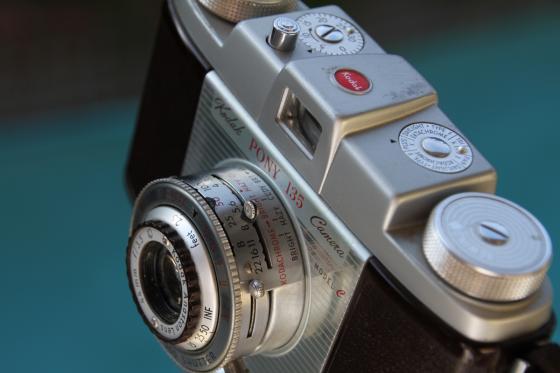 The Kodak Pony line of cameras was the design handiwork of the celebrated Arthur H. Crapsey. A graduate in Ceramic Design from Alfred University, Crapsey began work with Kodak in 1945, after being sent home from the war in Europe with one leg fewer than he had taken with him.

Mr. Crapsey was responsible for the design of a number of well-known Kodak cameras, among them the Brownie Bulls-Eye, the Brownie Hawkeye Flash, the Signet series and the Automatic 35.

Mr. Crapsey's first Pony was the 828, which Michael Raso featured on Episode 28 of the podcast. Here’s Mike’s brief description of that camera:

“The Kodak Pony 828 camera was made from 1949 until 1959. It featured a retractable lens mount with a four speed Flash 200 shutter and Anaston 51mm f/4.5 triplet lens. The body was made of bakelight (sic), which was a very common camera body material at that time …”

The 828 used the now-defunct 828 roll film format. You might still be able to get old 828 film stock on E-bay, but it would be long expired, since Kodak last made it in 1985. On the other hand, you could “roll your own” from 35mm, since 828 and 135 were the same size film. Suffice to say, though, that for today’s photographer shooting with the 828 is logistically complex compared with the subsequent ponies that Kodak trotted out.

All cameras in the Pony line featured bakelite bodies and simple viewfinders. Focus was manual guesswork, unless you carried a tape measure around with you. Prices back in the day, depending on the model, ranged from the mid-$20s through the mid-$30s.

I Have A Pony

The camera body is a sturdy, red-brown bakelite with a conventional tripod mount on the bottom. The back comes completely off for ease of loading and unloading the film and is retained securely via a sliding latch on the right-hand side.

On the top plate, besides the wind and rewind knobs, you’ll find a frame counter and—a nice touch—a film-type reminder. This being a mid-fifties vintage Kodak camera, the film-type reminder gives options for the primary Kodak films of the day: Kodachrome, Ektachrome, Pan X, Plus X and, the only survivor of the bunch, Tri-X.

Being a meterless, consumer grade camera, Kodak helpfully provided some aperture and shutter speed selection prompts for the user.

The lens barrel shows lighting conditions and corresponding aperture selection points for Ektachrome and Kodachrome, some of which fall in-between marked f-stops. (For example, if using Kodachrome on a hazy day, you’d select the aperture detent that sits between f 5.6 and f4.)

To assure yourself of a decent daylight image without metering you’d select your aperture based on the available light as mentioned above, select the shutter speed 50, marked in red, and set the focus to 10, also marked in red. “Box camera-simplicity” Kodak called it.

Riding with the Pony

Using the Pony 135 C is the kind of experience that you might imagine from 60 year old camera: there’s a bit more pre-snap fiddling about than you might be accustomed to. Of course, this is eased some if you set the aperture prompts as Kodak suggests. If you’re a more experienced shooter, however, you may want to exercise more creativity over your exposure settings.

Once you’ve selected your exposure be sure to set the distance to your subject. You can’t tell what’s in focus through the viewfinder, of course, so adjustment of the front lens element for focus is crucial for a sharp image. It’s well-worth the effort because when you’ve estimated the distance accurately the Pony’s Anastar lens is capable of sharp images. It’s viewfinder, however, is another story since it’s quite small, and those of us with eyeglasses may find it a chore to see to the edges of the frame as we struggle to peer at our subject.

Then, once you’ve set your distance, you need to be sure to cock the shutter. There’s a lever on the lens barrel for that. Sure,…it’s nice to be able to wind the film on and not have to worry about an accidental shutter release, but it’s a nuisance when you choose just the right moment to shoot only to realize you’ve forgotten to press down that infernal little shutter cock.

Bakelite must be heavier than modern plastics because the Pony C has more weight in the hand than you might expect. It’s a good feeling though, and it carries with it the connotation of substance and indeed quality.  The Pony is no Leica (despite its Leica-esque red Kodak dot), but it’s a decent little camera, and in my view at least, a clean one is worth picking up.

I made this matrix so you can easily compare the various models in the Pony line up.

All images shot on the Kodak Pony by Brian Moore