HomeAll PostsContentReviewsZen of shooting with my Polaroid 420 Land Camera

Zen of shooting with my Polaroid 420 Land Camera 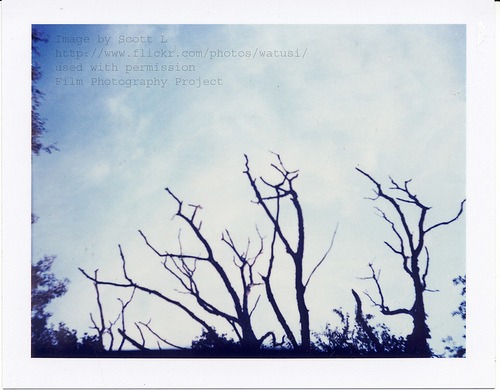 I prefer older, more inexpensive manual focus cameras to fancier ones. Most of the photos I take are taken with a Olympus XA2, a Minolta X-700 or SRT-201, Canon Canonet GIII QL17 or my Polaroid 420.

No photoshopping or anything, except for a little bit of corrective cropping. What I saw is what you see.

I got my 420 about five years ago for two dollars about at a garage sale in Bay Ridge, Brooklyn. The seller of it was so eager to get rid of it, for some reason, that he threw in a couple of other plastic 35mm cameras and two packs of film. The battery still worked, the lens was clear, the bellows were in good shape (unlike on the 220 that my father gave me, which he used for many years) and I had film, so I was able to head out and start shooting right away. It was sort of a boon to me because I got it right around when I gave up on my EE100 Special. So all of a sudden I had a new peel-apart camera that worked. It wasn't meant for the square format films, but they work in it just fine as long as I remember to compose my photos as a square.

I don't know where most people stand on this, but I prefer peel-apart films to integral films. There's just something about those colors, and about the delicacy or the fragility of the print. The smell, maybe the warning about the caustic chemicals. Maybe it's just that integral films are tucked away, encased in a spacesuit. I'm not sure.

Whenever I have the chance to use my 420, I really get excited. I don't use it as much as I should, I'll be the first to admit, but I always find that I sort of see the world differently when I use it. I find a certain calm in what I'm shooting that I don't know that I seek out otherwise. I love holding the camera up to my eye, framing a shot, watching the rangefinder's focusing patch line up, and then that pop, not a click, a pop of the shutter.

One of the interesting things is I remember a lot about what was going on in my life when I use that camera. They stand out in my mind for one reason or another somehow. For instance, I shot this one when my first daughter was only a few days old. I remember the day I shot it. The walk I was on, what I was doing that day, exactly where those sunflowers are, and what errand I was running when I shot it, the same for this one.

There's more to the photos I've taken with this one than just rectangles of film. There's real memories there. I have memories of my father shooting some photos of my family with his camera, and, now my daughter gets disappointed when I'm not photographing her with my "picture camera." Is it silly nostalgia? They're also great cameras that put out great pictures.