A couple of months ago I sent Film Photography Podcast host Michael Raso a question. I was confused about the different films available for instant cameras. I understood the Integral Instant Films - like Polaroid 600 / SX-70 and the Fujifilm Instax but I couldn't grasp what Michael was using when he mentioned Pack Film, and "Crack and Peel" materials.


Michael replied to my email in a most generous way - he was going to send me a Polaroid Colorpack II camera, complete with some film, all the way from America, so I could try out the Pack Film Experience. I was amazed to say the least, and I couldn't wait to get started!

A package arrived a few days later, and I feverishly opened it up, and I couldn't believe what was inside: 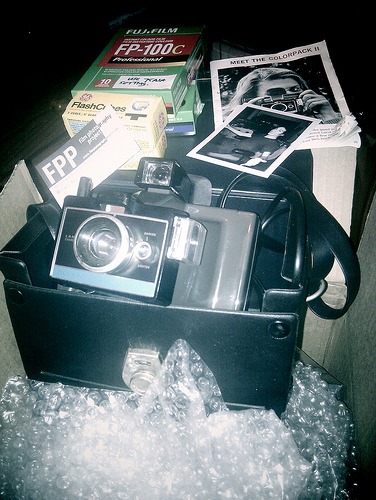 Michael had sent me a Polaroid Colorpack II loaded with black and white film, a spare pack of colour film, a couple of packs of flash-cubes, instructions and the case. Brilliant!

The first mystery had been explained. Fujifilm still make the film that goes into cameras like the Polaroid Colorpack II. They do the FP-100C color film , and the FP-3000B black and white film. This is called "pack film" or "crack and peel" film. Instead of being in one piece, like SX-70 or 600 film, these films consist of two parts, which are separated after exposure, leaving a print and a negative. 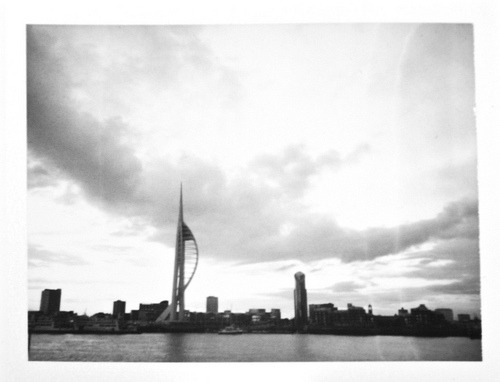 The Polaroid Colorpack II isn't difficult to use, but it's no point and shoot! Focusing is done by estimating the distance to your subject, then you turn the lens to the correct setting. Turn a dial on the front of the camera to lighten or darken the image, compose, then press the shutter release.

You then pull the film out of the camera, and wait the set amounts for the film to process, which is usually about 30 seconds. Then you peel apart the film, and you get your print. You can then use the backing paper to do a Polaroid Transfer—just press it against a piece of paper and you get an interesting looking image. Two photos for the price of one! 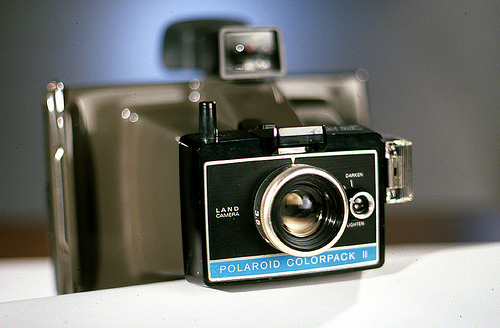 Shooting photographs with this type of camera is a real joy. It has all the analogue experience of using a film camera - zone focussing, with a limited number of shots, but with the extra organic twist of pulling the film out of the camera and peeling it apart. It likes no other photography I've done, and I love it!

If you want to have a go with a Colorpack II, make sure any models you buy have a clean battery compartment, and the rollers look like they're in reasonable condition. You can buy the film online easily, and cheap enough if you look around on a site like e-bay.com.

I hope this short post and video have inspired you to have a go at pack-film photography, and bring these great old Polaroid Cameras back to life!

Rob Nunn is a Film Photography Podcast listener, contributor and host of his own SCL Photo Podcast and blog. Visit him at http://www.robnunnphoto.com/