Imagine my surprise when I receive an e-mail regarding my July 20, 2009 post Super Zoom is Ka-Boom. I spend a fair amount of my spare time shooting film photography. When I’m not shooting, I’m usually talking about or promoting the whole “Shoot Film” idea to friends or colleagues ad nauseam. 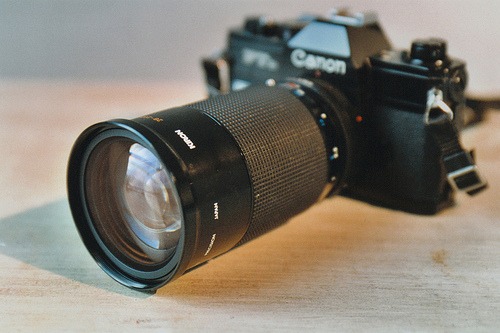 Apparently my negative experience with the Kiron 28 – 210mm lens (for Canon FD) touched a nerve with a group of Kiron fans. I received the following letter from Chuck Norcutt (published here with his kind permission):

Your negative blog post on the Kiron 28-210 "super-zoom" has been mentioned on the Yahoo group "Kiron-Klub" and has raised some eyebrows amongst this group of Kiron lens aficionados.

First, I'd like to state that there is no confusion about who produced this 28-210 lens and all Kiron lenses. Kiron was a subsidiary of the Japanese company, Kino Precision Industries. Kino had long been a supplier to Vivitar (including Vivitar Series 1 lenses) but wanted to produce their own line of lenses. They established the Kiron Corporation in 1978/79 as a subsidiary in Carson, CA to market the brand in the U.S. The first lenses went on sale in 1980. Unlike Vivitar, Kiron did not produce a range of different qualities and prices. All Kiron lenses were fairly expensive and, like Vivitar Series 1 lenses, the highest quality that they could produce given the technology of the time. They are generally regarded as equal to or better than the camera manufacturer's own and the test results in Modern Photography magazine will bear that out. Many of these lenses are still highly sought after and especially the 105mm f/2.8 1:1 macro which, even 25 years later, is about as good as they come.

Now, with respect to the 28-210 "super-zoom" it's not clear to me from your mini review why you've chosen to consider it a bust. Unless your particular lens is defective or damaged in some way it should exhibit outstanding performance... for what it is. It is designed to be a walk-around, all purpose lens. It comprises the unheard of (for the time) an amazing 7.5:1 zoom range. Such a lens must necessarily exhibit some performance comprises. These come in the way of weight, limited speed and optical performance. But what is most amazing is that the Kiron 28-210 actually gives away very little in the performance department. If you check the Modern Photography resolution test results reported by Robert Monaghan: (http://www.mflenses.com/content/view/55/) you will see that the 28-210 equals or exceeds the resolution of high quality prime lenses at 105 and 200mm and still compares favorably at 28mm.

But your mini-review doesn't talk about the lens's optical performance. I don't think it could since your sample images are in no way a test of that. It just calls your experience with it a bust. And I think I would agree with you if, as you did, I used it to shoot a nightclub performance. It is heavy and it is slow. I'm sure that, at f/4-5.6 it was no joy to focus in low light. In the same venue I'd have probably taken my Tokina 28-80/2.8 or perhaps a trio of fast primes. In my opinion you have simply misjudged the lens by using it in the wrong place. The 28-210 is in its element as a daylight walk-around lens. Heavy as it is, its purpose is to allow you to travel light by leaving a whole stable of prime lenses, an extension tube and a big camera bag behind. Daylight will overcome its relative slowness for focusing and allow shooting at middle apertures for best performance. So don't just park it on the shelf for a year. Take it out again but during a daylight outing where you want to travel "light".

ps: I'm having some difficulty interpreting your shot of "Dirty Blondes". You say you used your Canon FTb with the Canon 177a flash unit. The 177a is a rather petite and low power shoe mounted flash. Yet the flash shadow is not from an on-camera flash. The shadows are not behind the subject but displaced well to the right, which would require a flash well off-camera to the left. I'm just curious. How did you do that?

Thank you for your e-mail.

In a digital world, it is nice to know that I am not the "Last Man on Earth" shooting film with manual focus lenses.

Firstly, I would like permission to re-print your letter. I would like to do a follow-up to my blog. Your letter would be a nice inclusion. I really appreciate the technical information and it would be a nice way to plug your Yahoo group. I didn't know about the "Kiron-Klub" on Yahoo. Considering my blog, do you think that I would be allowed to join the group?

My blog is about film photography and my personal experiences related to the hardware used. After reading your letter, I agree with you about my choice of lens for the evening. I really didn't know what to expect at the club. Lighting, distance to the band was all a mystery. The Kiron seemed like a good choice at the time. It was a chore to use in the dim light. I will take your advice by not "parking" the lens and taking the lens on a day trip in the near future.

Lisa Keane of "Dirty Blondes" was shot vertical. That is the only way I can explain the displacement of the shadow.

Again, thanks for the letter. I really hope I didn't piss anyone off. Was not my intention!

After sending my response to chuck, I realized that I shot exteriors in New York City using the Kiron on July 4th. It slipped my mind because I shot Kodachrome and have yet to review and scan the slides. I’ll make good on my promise and will post the results soon. In the meantime (if you’re a Kiron user), check out the Kiron Yahoo Group.