When I opened the film, I was surprised to see that the backing paper design was different and had a waxy sheen to it.  I found that, in use, it was a little more difficult to pull the paper tight at the end of an exposed roll, perhaps due to increased thickness of this new backing paper.  Or maybe because of its slicker surface.

I did a little research to find out why the change was made.  As with everything on internet chat forums, I found many different perspectives, presumptions and the usual irate comments.

It seemed the best thing to do was to ask Kodak.

This past March, Tim Ryugo, a veteran Kodak employee (since 1979, WOW!) who is currently an account manager for Kodak Alaris reached out to me to test their new P3200 film.  I figured Tim could give me a straight answer regarding my questions about the new backing paper.  Here’s our conversation:

Johnny:  “Hey Tim, I have a Kodak product question. I usually shoot 35mm and 120 only on occasion. Last week I bought a fresh box of Tri-X 120 and found that the backing paper has a glossy wax coating. In all my years of shooting, I’ve never seen this. A few shooters I talked to said that their recently purchased Kodak 120 has this new backing also. Just wondering if there was an announcement about this that I am not finding and what the purpose is. I’d like to share the info with the community. Thanks for any help!”

Tim: “Hi Johnny, In 2015- 2016, we experiencing incidents of frame numbers appearing on 120-format film negatives. Manufacturing over time has made modifications to the backing paper which we believe should minimize the potential for this type of blemish going forward. What we have done is add a primer/lacquer under the coatings that add glossiness and perceived thickness to the paper. The paper material is the same as the older paper. The sheen is the only thing different due to the primer/lacquer.”

Johnny:  “Thanks so much for the detailed explanation, Tim. Some folks are having trouble with how tightly the new film backing can be wound around the reels to make it light safe. Any thoughts/advice on this? Would it be okay if I quoted you in my Facebook photography group? Much appreciated!”

Tim:  “I recently shot the film on my Pentax 6 x 7, and I also use a Fuji 645 wide without issue.  the issue may be the adhesive on the “after exposure label” may not stick as well as they are used to. A light lick is best with no seconds.  the tab needs to be folded over so that the label sticks to label.”

Johnny:  “Great advice! I have yet to process my first batch of this film which I shot in a Yashica TLR. I didn’t have any trouble but see what you mean about the adhesive.”

Tim:  “ie label to label. the natural thing to do is that if the label doesn’t stick…is to lick it again…and then again..leaving no adhesive.  We have asked mfg to add or change to a more aggressive adhesive ( and also remove the blue dye.”

Johnny:  “Right, I see. Good to hear improvements are still on the roadmap.”

Tim:  “this will take some time to turnover. btw. it’s ok to quote me. also if your group has more questions. they can write to Profilm@Kodakalaris.com —goes direct to product management.”

First let me say, it’s f*@king cool that Tim not only works for Kodak but he actually shoots film too.  He’s not just shoving a product he doesn’t use; film made for film shooters by film shooters! 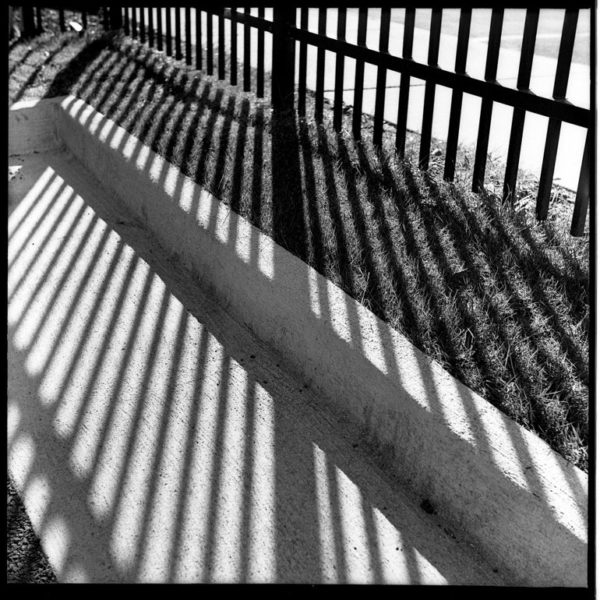 As you can see from my first Yashica A image, there don’t appear to be any issues with light leaks due to improper tightness of the paper.  And, to boot, I was using the red window advance method, in bright sun.  Of 60 images, there was NO bleed through of frame numbering on my shots.  If you are having trouble with the new paper, hopefully, Tim’s recommendations are helpful.  From my first impressions, however, Kodak is still kicking ass!

Thanks for reading and let me know how your Kodak 120 is working out!

I'm Johnny Martyr and I've been shooting for almost 20 years.  Candid portraits, weddings and concerts on 3200 speed films are probably my most widely known work.  But I also enjoy shooting Tri-X images of antiques and objects featuring repetitive lines or shapes.  Mostly an available light b&w 35mm guy, I like to blend art and documentary photography.  I shoot Instax with my kids and dabble in medium format too.  I try to post frequently and enjoy viewing others' work on Flickr and I write on Wordpress when the spirit moves me.  I'm grateful to Film Photography Project for everything they do for the film community!
https://johnnymartyr.wordpress.com/