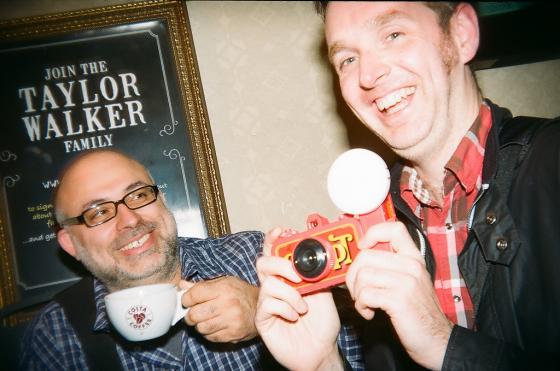 Film Photography Project Deputy Darren “Pancho” Riley recently covered the opening of the Lomography Shop in Manchester UK. For those of you who are not familiar with the “movement,” I’ve served up some quotes from the Wikipedia on Lomography.

What is Lomography?
“The Lomographic Society International provides Lomographers with galleries, stores and "embassies” dedicated to the growth, support and public exposure of the art. Supporting budding Lomographers through social events such as exhibits, educational workshops, exposure galleries to encourage public enthusiasm and awareness, as well as providing retail supplies, gallery stores and rally places for Lomographers to socialise. The society is headquartered in Vienna, Austria, where most of its events are organised.

The Lomography website endorses a motto of "Don't Think, Just Shoot". This motto is accompanied by The Ten Golden Rules which are supposed to encourage spontaneity, odd angles, and taking photos anywhere, while minimizing considerations of formal technique. Typical lomography cameras are deliberately low-fidelity and inexpensively constructed. Some cameras make use of multiple lenses and rainbow-colored flashes, or exhibit extreme optical distortions and even light leaks.”

above: Darren's LomoKino "Becky in Piccadilly"

Something strange is happening. The internet seems to be awash with doom-mongerers talking about the death of film. Soon it will be no more, digital is the future and to many people, already the present. Take a walk around Manchester's Northern Quarter however, and it's a very a different story.

Within a two minute walk you can find four stores still selling film and film cameras, the newest of which is Lomography's latest UK store and the first outside of London. I was invited along to the opening party, so armed with my La Sardina, my LC-A+ and a Diana Mini I went along and present the following report for the FPP.

My plans were scuppered as soon as I walked through the door. The party was in full swing, drink flowed, music played and people chattered away, which meant it wasn't possible to record anything of a good enough quality for the show. Fortunately, Heidi Mace, Lomography's online manager for the UK was kind enough to answer my questions via email later on in the week. Read on to see what she had to say…

This is the first Lomography store in the UK that is outside of London. Why Manchester?

Manchester is a fantastic city that really suits the Lomography ethos. It's jam packed with culture, music and art, and of course completely amazing people! Last year we took the LomoRoadshow (a series of workshops around the country) to Manchester and we were blown away by the enthusiasm and commitment of Lomographers in that part of the country. It is home to the second largest community of lomographers in the country, with great potential for many more.

We are sure that the Manchester Gallery Store will become a great hub for our activities in the North, we want it to become a destination for anyone interested in analogue photography - they can pop in, hang out, try out new cameras, meet other people who share their passion, and, of course, have fun at our parties!

In a time when more and more people are taking pictures with their phones and consumer digital cameras, film should have died a death a long time ago, yet seems to be making a big comeback. Why do you think this is and how big a part do you think Lomography have played in it's continuing popularity?

Film photography is an artform that, like paint and paper, anyone can have a go at and feel proud of their work. And like paint and paper, there will always be room for it amongst the creative people in society! Digital photography is an amazing technological advance, that sits comfortably alongside film photography. Many of the most popular apps and tools mimic the effects of plastic lens cameras and film, so in fact they drive people to us, as they enjoy those effects and then look for a way to have more control and produce unique effects, which is what film gives you: complete creative control!

You mentioned at the party that Lomography doesn't ever pay for advertising, relying instead on reviews and word of mouth for its publicity. This touched upon a question I was planning to ask you. The company has a very active community and works with that community quite heavily, and the internet seems to play a huge part in that interaction. It strikes me that Lomography has embraced the digital age in a way that no other camera or film manufacturer has. Would you agree and do you think that although it is often seen as a threat to film, that digital technology can actually help keep the use of film alive when used in such a way?

No one at Lomography sees digital as a threat to film, in fact it is our largest platform, our most visited gallery, our biggest shop window and our most banging party venue! www.lomography.com gets on average 2 million unique visitors per month, it acts as a social network and a magazine about everything analogue. There is a huge community there of creative photographers sharing their work, chatting, submitting and reading tipsters and articles and swapping stories. Lomography never set out to be the big international movement it is today – it was two students who loved film photography wanting to share that on a creative level. The internet has allowed us to connect with people all over the world, and follow those people to new countries where big Lomography followings have sprung up organically – we now have gallery stores in 22 countries.

You are right that we do not advertise, instead we work with editorial media, and collaborative creative projects with interesting partners. The money that we don’t spend on advertising goes into big art projects that our whole community can get involved in – such as the huge six month LomoWall exhibition we are planning with The Museum Of London around the 2012 Paralympics.

Speaking of digital techonolgy, your latest camera, the LomoKino, seems a perfect example of a film camera that really needs digital technology to get the most from it, in terms of scanning, putting the movies together and then sharing the movies afterwards. Was that part of the design process for the camera?

LomoKino films can be dealt with two ways, the analogue route – get your negatives processed and put them into the LomoKinoScope, which you can hold to the light, wind and watch your movie, or the other option is to get your negatives scanned so you can make a digital version of the movie.


above: FPP founder Michael Raso created two LomoKino films immediately after it's launch in the Fall of 2011.


With any roll of film it’s pretty standard nowadays for any lab to offer a scan to cd service, effectively this is what happens with the LomoKino, but you get 144 photos! So in terms of it’s relationship with digital it doesn’t really differ from any of our other cameras. I think the product designers were thinking more about how to make a movie camera with 35mm film, than wanting something specifically digitizable (as if that’s a word!)  The LomoKino is Lomography's first foray into the moving image.

Any plans to release any more movie cameras?

The LomoKino took around two years of development. There are always multiple projects on the go, some of which come to fruition, some don’t, so who knows what’s going to happen in the future!

Darren 'Pancho' Riley is a relative newcomer to film photography. Prior to buying his first film camera in May 2010, he only ever shot holiday snaps on a cheap digital camera. His discovery of film awakened a real love for photograpy. He uses many different cameras but his favourite's are the Holga 120GN and the Lomography Sprocket Rocket.
Darren lives in Bolton in the North West of England with his girlfriend Becky, and is the first  official UK "Deputy" for The Film Photography Podcast!