I received a call late last night that friend and filmmaker, Joe Sarno had passed away. All of us at the studio were very close to Joe the last twelve years, archiving and re-releasing his films around the globe, allowing fans of old and new to enjoy the wonderful films that Joe wrote and directed.

Our deepest sympathy goes to Joe’s wife, Peggy and family.

We are all devastated by the news. Joe was a great man and loved by everyone at Pop Cinema Studios who had the wonderful opportunity to work with him. 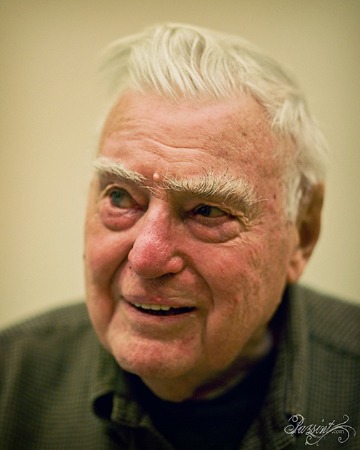 I loved him dearly and commend his spirit to the cinematic firmament.

His achievements will far outlive the frailty of the human body and the ephemeral prejudices of taste and morality. For me, he was the consummate filmmaker, a man who drank deeply of the medium’s essence and dared to trade in its most profound truths: simplicity, directness, and an insuperable faith in the power of human presence.

His death last night, Monday, April 26, marks the passage of a robust and innocent genius.

Godspeed, dear friend. The ravages of war can no longer touch you; your long afternoon of creative idleness has come to an end. The runway is once again clear for take-off.

My deepest condolences to Joe’s beloved wife, Peggy Steffans Sarno, to his children, and to the legion of actors and technicians who had the good fortune to work with him. His visionary gifts will not be forgotten.

A pioneer of sexploitation cinema, American film director and screenwriter Joseph Sarno’s prolific career spans the evolution of the genre, beginning with Nude in Charcoal in 1961 and culminating in his 2004 feature Suburban Secrets. His early black and white films are praised for their chiaroscuro lighting and their complex psycho-sexual plots; but it was his more explicit art-house film, Inga, shot in Sweden in 1968, that brought him international attention and catapulted its young star, Marie Liljedahl, to fame. Joe continued to write and direct adult films through the 1970s and 80s, often working under a pseudonym or offering his director’s credit to the film’s female lead (A Touch of Genie, Inside Jennifer Welles). Among his most noted films are Sin in the Suburbs, Inga, Abigail Leslie Is Back in Town, Confessions of a Young American Housewife and Butterflies.