8mm Magazine Home Movie Film
What is it? How does it Work? Is it available? (Quick link - get it HERE)


With the rising popularity of Regular 8mm film (especially since the FPP is leading the charge for the most film emulsion options out there!), we’ve been receiving a lot of questions about Magazine 8 and other cartridge-type Regular 8mm movie cameras. That’s good news for me because I have always adored these formats!

Magazine 8 was a film format created by Eastman Kodak Company in the 1940’s. The format was modeled after the already-popular Magazine 16 format which had been released for quite some time by then and used 16mm film–that’s a discussion for a different day.

Magazine 8 is technically not a separate ‘format,’ rather, it’s just a different delivery vehicle with which to shoot Regular 8 more conveniently.

Inside the magazine (which would have been preloaded with fresh film at the Kodak factory) is normal Regular 8mm film that is wound on a special plastic core. And–that’s it, really. The magazine is designed to be shot similarly to normal Regular 8mm movie film. There is a side one and a side two. When you’ve finished shooting side one, you flip the magazine over and shoot side two.

The customer would then take their exposed magazine to their photo dealer who would return the customer’s deposit (just like a deposit on a soda bottle or can) and send the magazine off to the lab. The lab would remove the customer’s film, send the empty magazine back to Eastman Kodak, and return the developed film back to the customer. Once Kodak received the magazine, they’d inspect it, load it with fresh film, and re-package to be sold once again.

Magazine 8 - Where can I get some?

Kodak stopped making Magazine 8 a number of years ago. If you’d like to find a magazine, you can usually get your hands on one via eBay or other secondhand markets.

The FPP has made a limited number of Magazine 8 film packages available which will include the film of your choice loaded into the magazine, along with processing and scanning.

Magazine 8 was never designed to be reloaded by the consumer. The magazines were loaded by Kodak at the factory, in complete darkness; inside the magazine, there is no daylight spool to protect the film from light during loading and unloading. The film is simply wound on a special core. If you were to open the magazine yourself in any kind of light, you’d ruin all of your film!

That being said, if you’re ambitious enough, you can reload them. It takes a lot of practice and some equipment is required. You’ll need to first measure out 25 feet of film, clip each end to match the T shape notch on the cores inside the magazine, modify the perforation towards each end of the film, and seal the cartridge with black tape. Most of which needs to happen in complete darkness. 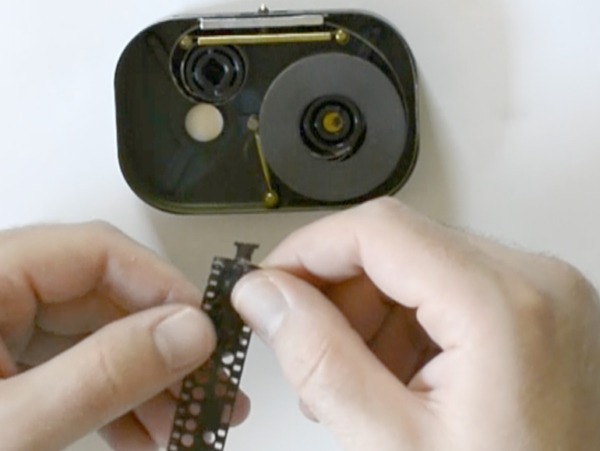 Magazine 8 - Which cameras use this film?

There are too many to list! Almost all major 8mm camera manufacturers in the 1940’s and 1950’s had Magazine 8 options. Big names included Kodak, Bell & Howell, Keystone, Revere, Sears/Tower, etc.,

You can generally tell if your 8mm camera takes Magazine 8 by opening the film compartment. If you don’t see two spindles to take normal 25ft spools of Regular 8 film, there’s a good chance it takes Magazine 8. 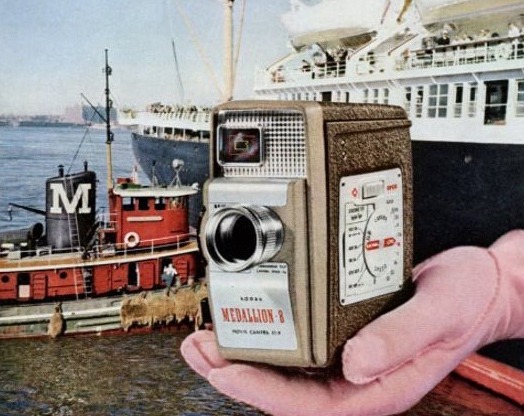 Do be aware, there is a difference between Magazine 8 and other 8mm Autoload Cartridge systems (see below.)

There were also proprietary magazine systems provided by other film manufacturers outside the U.S. These are rare to find in America but not impossible.

8mm Autoload Cartridges - What the heck are these?

While Magazine 8 was actually quite popular among consumers, some were turned off by the idea that they had to 1) pay a deposit when buying Magazine 8 film and 2) could generally only find Kodak film in Magazine 8. People wanted the convenience of the 8mm magazine shooting but with the ability to load the magazines themselves with the 8mm film of their choice.

That’s when Bell & Howell released their 8mm Autoload Cartridge. Unlike Kodak’s Magazine 8 system, the Autoload Cartridges could be easily reloaded by the consumer. Loading the magazine is just as easy as loading a normal Regular 8mm movie camera.

You simply take your 25ft spool of Regular 8mm film and thread it through the cartridge. Bell & Howell’s cartridges also have an indicator on the side to tell you which side you’ve shot. Once you’ve shot both sides of your film, simply open up the cartridge, remove the 25ft spool, and send the film to your lab. You keep the cartridge for reloading again.

I love these Autoload Cartridges. They’re great for using on holidays or important subjects when I don’t want to fumble around with rethreading a normal Regular 8mm movie camera.

8mm Autoload Cartridges - Are there other options?

Bell & Howell’s 8mm Autoload Cartridges were by far the most popular but there were at least two other do-it-yourself Regular 8mm cartridge systems out there that I know of.

Minolta made a similar Autoload Cartridge for their Minolta 8 camera.

8mm Autoload Cartridges - Where can I find them?

If you have a camera that takes 8mm Autoload Cartridges (such as the Bell & Howell 418 or 315 and Sears 9.9130) you’ll want to make sure it comes with at least one cartridge before you buy the camera, to begin with. The cartridges were also sold separately as accessories, so if you’re lucky, your camera might come with a spare cartridge or two.

Finding the cartridges for sale on their own is a bit harder, but not impossible. Look on eBay and other sites.

Why bother at all?

I love Magazine 8 and the 8mm Autoload Cartridges made by Bell & Howell because of the convenience. It’s the benefit of a Super 8 style cartridge without the big price tag. Additionally, the Bell & Howell 418 and 315 cameras are wonderful to use!

You’ll also find many Magazine 8 cameras on the cheap because most people have no interest in shooting them anymore. All to your benefit!

What about 16mm Magazine Film?
On November 13, 2020 the FPP introduced 16mm Magazine film to its on-line store. Visit that page HERE.

The Film Photography Project is dedicated to keeping home movie film alive! Please help support the cause and purchase your movie film, developing and scans from our FPP Movie Film Dept at our On-Line Store!