On January 28, 2020 The Film Photography Project on-line store received its first shipment of Film Ferrania P30 BW 35mm film. (Order HERE) What is it, where does it come from, how do I shoot it and how do I develop it? Read on!

Until 2010, Ferrania was the leading Italian motion picture and still photography film brand beloved by directors Fellini, De Sica and Antonioni (to name a few) – in fact, the vast majority of classic Italian cinema released between 1923 and 1965 was shot on Ferrania stock.

In 2012, entrepreneurs Nicola and Marco committed to resurrecting this iconic film brand using the original Ferrania formulas – fast forward to today, when the new Ferrania film P30, produced in the rebuilt Ferrania Film factory in Ciaro Montenotte, Italy using the same formula used by Italian cinematography masters of the mid-20th century is available to a new generation of film shooters! 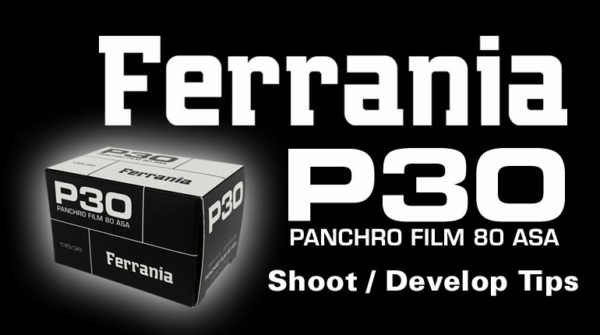 How to achieve AMAZING results with Ferrania P30

1. A manual camera is recommended.
Ferrania P30 is not DX coded, so it is highly recommend you use a fully manual 35mm camera - or at least a camera that gives you some control over either ISO, aperture or shutter speed. Cameras with no manual ISO setting (and compact 35mm cameras) will default to either iso 50 or iso 100 (consult your camera manual). If you are using an automatic camera, you can shoot P30 but not at the optimum ISO.