What 8mm Film Projector Should I Buy?

Before smartphones and digital cameras, and yes--even before camcorders--watching home movies was a special treat. Families and friends would gather in the living room, den, or shag-carpeted basement, to sit on the floor in front of a movie screen (or sheet if dad was a penny-pincher) and watch in amazement the silent moving images projected from the back of the room. 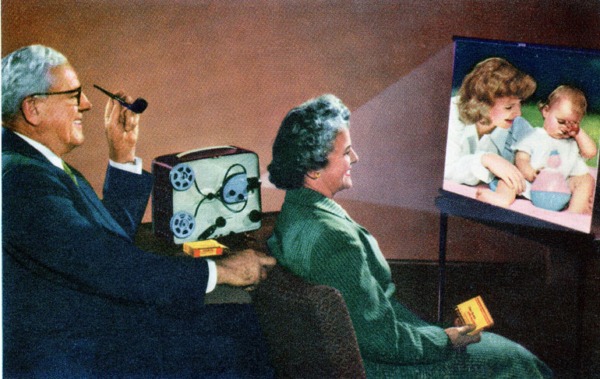 For many in those days, it was like having a movie theater right in your own house--and you and your family were the stars of the silver screen. There were even catalogs of cartoons and short films you could buy to watch at home--a sort of precursor to video cassette rental. Behind all of this, was the trusty film projector, which brought these moving pictures to life.

Whether you shoot Super 8, Regular 8, or 16mm movie film today--or if you have a box of old home movie films sitting in your attic you’d like to see--projecting home movies the old fashioned way is still enjoyed by many. But is it safe for the film? What kind of projector should I buy, and what should I look out for? Do I need supplies? Let’s try to answer some of these questions.

Is it safe for the film?

When we talk about safety here, we’re mostly talking about the film itself. Does projecting your film on a traditional film projector do any harm?

Everyone will have a different opinion on this, but I will sum it up to you as such: there will always be some kind of risk involved when you project your film through a projector. Regardless of how fancy/new/expensive your 8mm or 16mm projector is, there is always a chance that the projector could break, the film could get jammed, something could cause the film to get scratched, dust--the list goes on.

If you’re looking to keep your move films as pristine as absolutely possible, I would tell you to have your film scanned digitally, and either watch the scan on a TV or a digital projector. Over time, projecting the film can cause it wear and tear--and that can be especially problematic for older home movie film.

People often find old home movies in their attics or other hot and dry locations in their house. This can cause the film to be brittle and dry, which means it has a good chance of breaking during projection. Other films may have old splices that come apart, or damaged sprocket holes which can also cause jams and errors in projection as well.

If you keep your films cleaned and your projector cleaner, you can project your movies successfully. For me, one of the greatest joys of shooting movie film is projecting it using a film projector for friends and family to see. If I couldn’t do that, it wouldn’t be as fun. But if that’s not your jam, stick to digital film scanning and digital viewing--it’s a safer option and will make your films last longer. 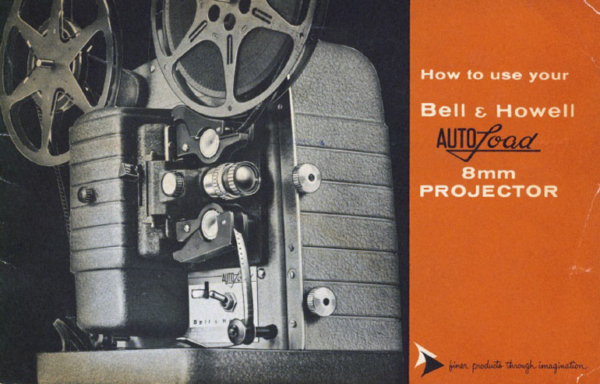 What kind of projector should I buy?

This depends on quite a few things. First and foremost: what format of film you have.

Generally, most home movie options are Regular 8mm (also called Standard 8 or Double 8), Super 8, Super 8 sound, and 16mm. Here’s a handy chart to help you identify what you have.

If you are trying to project 16mm movies, you’ll have a somewhat easier decision to make. Most 16mm projectors you’ll see out in the wild also give you the option to project sound movies as well; older projectors are generally silent. 16mm was the format of choice for many years in schools and other institutions to show instructional/education films, so they are plentiful. Bell & Howell and Kodak a great models to look out for. I had a Kodak Pageant projector for many years and loved it--it was easy to use and reliable. If you find a Bell & Howell unit, be cautious--earlier models had an issue with something called the ‘worm gear’ which almost always needs to be replaced. Look for a newer model or someone who has had theirs replaced. Once the gear is replaced, it’ll work like a charm. You also need to be cautious of older projectors that use tube amplifiers to generate their sound. These units have electronics that need a total overhaul and are NOT safe to use. Stick with units made in the mid-to-late 1970’s and 80’s.

Things get a bit more complicated with the 8mm formats. Regular 8mm was the format of choice for home movie making until the 1960’s when Kodak introduced the new Super 8 format. Therefore there are lots and lots of projectors on the market for this format and for Super 8. If you have both formats to project, I recommend finding a unit that can project both--these were popular in the 1970’s and 80’s. They’re usually called “Dual 8” projectors since they can project both Regular 8 and Super 8 formats.

Some great Dual 8 models include the Bell & Howell Lumina MX33 and the Chinon 2500GL. If you’re just looking to do Regular 8, the Sears Super Automatic 8 is a great option and if Super 8 is your bag, look for the Bell & Howell Autoload 198. I recommend these models because I’ve owned all of them--but the possibilities are endless. If you have some extra cash to shell out, considering look for models that have been professionally refurbished and cleaned.

Super 8 sound is another format you may have encountered. This is no longer manufactured, so chances are you won’t be shooting it any day soon--but you may have a few rolls lying around that you want to watch. The sound was recorded using a thin magnetic tape that was glued to the film. This is called ‘magnetic sound’ so you need to make sure you find a Super 8 projector that can handle it. Kodak was the dominate manufacture here in the states when it came to the format. Units that only play optical sound (which is a completely different sound recording format) will not play your Super 8 sound home movies. 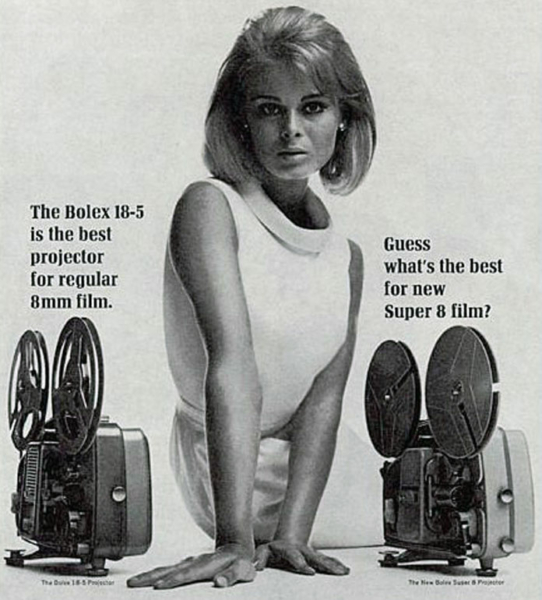 What should I look out for?

If you follow these questions, you’ll likely be in good shape when you go to buy your projector.

Can I project films like Kodak Vision Color Negative Film?

Nope. Kodak Vision3 is a negative film stock--so if you project it with a movie film projector you’ll be projecting a negative image! You can only project reversal (aka positive) movies which is stock such as vintage Kodachrome, new Ektachrome, Kodak Tri-X, Cine8 40 BW Reversal, etc., 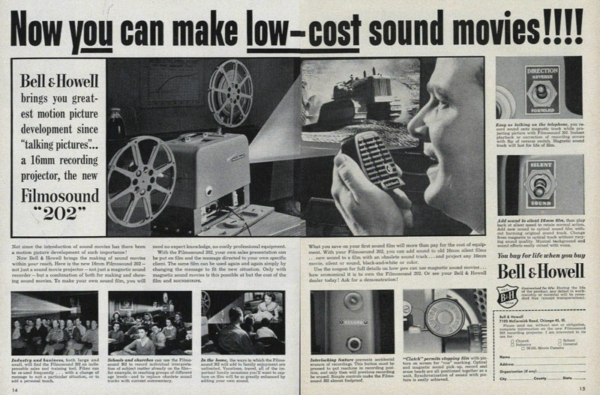 What supplies do I need?

Bulbs - Projectors use light bulbs to illuminate the film to project it on the screen. Most bulbs are rated for only a limited amount of hours of projection, so you want to make sure you invest in a projector that takes bulbs that are readily available. The general rule of thumb here is the newer the projector, the more likely the bulbs are still manufactured. If you’re not sure what kind of bulb the projector takes, google the model number and see if you can find a manual. Chances are, it’ll be harder (and more expensive) to find bulbs for a model made in the 1950’s versus a model made in the 1970’s.

Belts - Many projectors used rubber or leather belts--the later was most popular on much older models from the 1930’s and 1940’s. Some don’t use belts at all. Replacement belts are usually pretty easy to find for many models out there.

Splicing Equipment - You should always replace splices on older home movies--chances are they may be old and brittle and if they break during projection, it could cause a real problem. A cheap and easy solution is to use Kodak press-tapes. The splicers are very inexpensive and easy to find--and use--and the splice tape is still being manufactured in Super 8, Regular 8, and 16mm.

Leader - Leader is that white film that is usually spliced to the very beginning of the film. It’s put there to allow you to thread the film into the projector without touching the actual movie film. You can buy leader in Regular 8, Super 8 and 16mm formats and splice it to your film yourself using Kodak press tapes. Do this for any film you’re projecting. If you film already has leader on it, it’s probably still in good shape.

Film cleaner - It’s a good idea to clean your movie film either before or after you project it. A good movie film cleaner will also have a lubricant in it, that helps to keep the film moving along smoothly during projector. I recommend FILMRENEW--if you have older movie films that haven’t been projected in a while, you can actually soak the entire reel in the solution overnight which makes things super simple.

I hope this blog has given you some great guidance on projecting movie films. So, grab your camera, shoot a roll of Ektachrome, and set up the projector for your family and friends to enjoy your movie-making debut!

The Film Photography Project is fully vested in bringing back the art of shooting home movies. While The FPP doesn't sell projectors, they do sell 8mm, Super 8 and 16mm movie film, processing and scan services. Check out the MOVIE DEPT!