In my brief time here at the Film Photography Project, it's become apparent that FPP listeners, on top of having boatloads of G.A.S. (gear acquisition syndrome), are eager to get out there and try new things. At the top of that list of new things to do is getting into the darkroom and/or developing film at home. Though I could write all day about how quick and easy these processes are to do, let's take a look at home developing through a fresh perspective. Not only did this FPP listener have a great first experience with large format film and home developing, I'd have to say he nailed it!

Without further adieu, I give you Adam Doe. 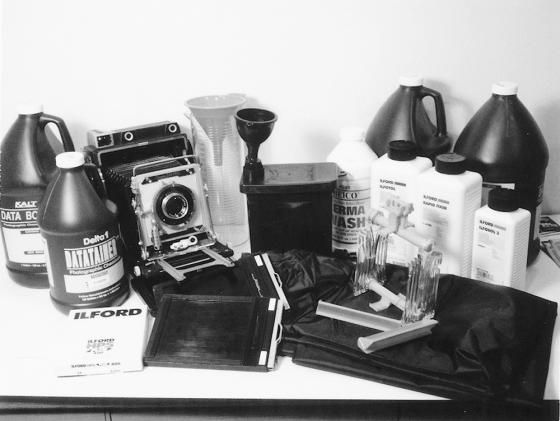 One of the things that I love about working with film, especially when shooting with older cameras, is that it's a process. You pick a film stock, load the film, find a subject,  decide which f stop would best suit the image you have in mind, meter for an exposure, direct the subject, perhaps you manipulate the lighting, frame your shot, pick a focal point, focus and then you take your shot. But the process doesn't end there, the film needs to be developed to make negatives or slides and then there's creating the end image, either in a darkroom or by scanning the negs and processing digitally.

I have a little a bit of experience developing negatives, but it has always been with friends who have far more experience than I. I wanted to feel as comfortable with processing my own film as I did creating the shot in the first place though, admittedly, the idea of processing myself for the first time seemed a bit daunting. Would I be be able to do it without screwing it up? Was attempting to develop large format film going to complicate the process? I had no idea, but then a gift of a Paterson three reel tank from my wife gave me just the nudge I needed to get started.

Now let me tell you, if you suffer from GAS, then you'll love getting ready to process film at home. There's a ton of crap to acquire; reels, changing bag, bottles, graduated cylinders, thermometer, chemicals, hangers, more cameras (ok that last one was a complete rationalization, but hey, if you're gonna go with the GAS...). I had been shooting with a recently acquired Graflex Crown Graphic 4x5 camera but had only shot fuji instant pack film using an instant back. I wanted to start shooting negative film and needed a solution to process large format at home. I very quickly eliminated tray processing as a solution as the space I have to work in is tight, light proofing it would be impractical and working in complete darkness for the entire process would add a level of complexity to the equation that I felt I could do without. Of the daylight solutions I researched, two seemed promising and within my means. The first, the Combi-Plan tank is a self contained system consisting of a tank with tight fitting lid with two valves, one on top to accept the chemistry another at the bottom to drain the chemicals out, and a film carrier that will hold up to six sheets of film or four glass plates. The second is the Mod54, a 4x5 sheet film holder designed for use with Paterson three reel tanks that can hold up to six sheets at a time. In true GAShead fashion I ordered both. The Combi-Plan was the first to arrive and when it did I began preparing to develop.

My first step was to mix my chemicals the night before I would process so that the chemistry would have enough time to come to room temperature. Since development times are temperature dependent this would assure that my chemical's temperature would remain consistent throughout the development process. I chose Ilford chemicals for no other reason than that is what my friend always had mixed in his darkroom and I liked the idea of a little familiarity. Also, being liquid, they could easily be mixed in whatever quantity I needed. 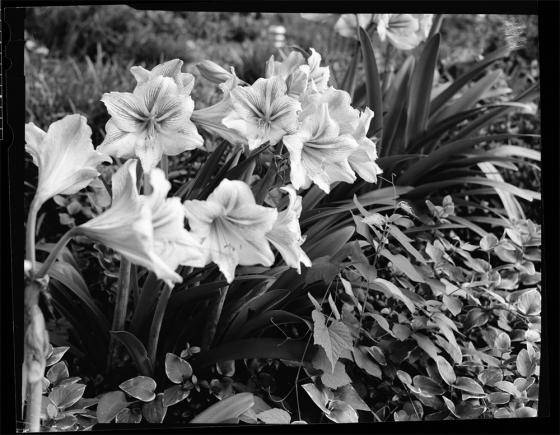 The next day I was ready to roll, I had three film holders loaded with six sheets of Ilford HP5 Plus and in the late afternoon I shot four sheets of 4x5 around my wife's garden as the sun was setting. Later I tried to take two shots of the time honored self-portrait in the bathroom mirror but one of my sheets hadn't been properly loaded into the holder and popped out into the camera after I removed the dark slide. Lesson learned: Always take the time to make sure your sheet film is properly seated in the holder. Feel along the edges of strips that the film slides behind and make sure you can feel the angled ends of the strips and that the film is behind them. I loaded the film into the Combi-Plan tank's film holder in a large changing bag. The Combi-Plan comes with two guides that are placed over the film slots that make loading in the dark a breeze. Once the film holder was in the tank I began processing. I used the Massive Dev Chart app for the iPhone (it's also available for Android and Nokia) to time my development. You select your film and then your developer and the app sets up timings for Developer, Stop, Fixer, Hypo Clear and Rinsing. It even gives you audible signals to let you know when and how long to agitate as it times each step. I just followed along with the apps timings for each step. I did, on the recommendation of a friend make some substitutions. I used water as a stop bath, used Perma-Wash instead of Hypo Clear and added a step in the process by dipping my film briefly into Ilfotol before hanging the negatives to dry to prevent spotting. When i pulled the negatives from the tank I could see that there were images and as I held each one up to the light a rush of excitement came over me. What a cool feeling to have developed my own large format film at home. All it took was an investment in supplies and the will to do it. I discovered that there's a dirty little secret about developing film yourself. It's not daunting at all, It's easy.

Adam Doe is an avid film photographer and can be found on FLICKR! - http://www.flickr.com/photos/adoephoto/