Use Your Smart Phone to Capture LomoKino Movies! 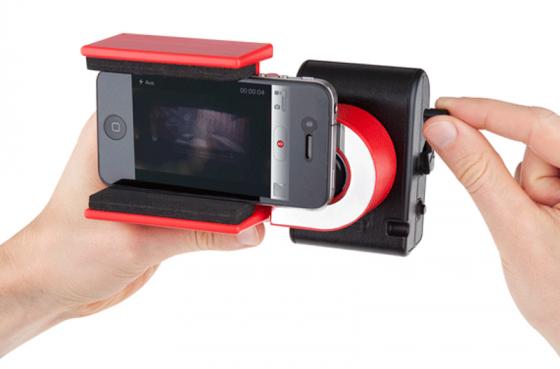 If you're a Lomo shooter like me, you've already heard of the Lomography LomoKino. A 35mm film camera, the Kino allows you to shoot moving images by winding a handle on the side of the camera. As the film winds on, the sprocket holes catch on a switch that opens and closes the shutter. This allows you to capture up to 144 frames on one 36-exposure roll, giving an effect not unlike the very earliest of movie cameras, mainly because it's very much the same principle.

It’s very time consuming to convert the film into a digital movie as you must scan every frame and then import into a editing program.

If, like me, you bought the LomoKino bundled with the LomoKinoscope, you have an alternative to the scanning process. The Kinoscope is a small viewer in which you place your shot movie, hold it up to the light, put your eye against the viewer and wind the handle. The film plays out in front of you, very much like the old 'What The Butler Saw' type movie-machines found on amusement piers. Lomography has developed an attachment that enables you to capture this movie as a video on your smart phone. Called the LomoKino Smart Phone Holder (snappy!), you attach the Kinoscope to one end, your camera-phone to the other and line them up so you can see the first frame of the movie on your phone's screen. All you need to do then is press record on the phone and wind the film till it's over.

I was lucky enough to be asked to test this accessory and I must say, it's excellent. A very quick and easy way of getting your movie into a digital format, it has the added benefit of recording the clicking sound from the winding of the handle, giving it a very authentic vintage sound. Throw some dust into the mix and hey presto, instant 1920's cinema!

Here are some of the LomoKino movies I made using the Smart Phone adapter!

How to Use the LomoKino Smart Phone Holder on Lomography.com
http://www.lomography.com/magazine/tipster/2012/01/18/how-to-use-the-lomokino-smart-phone-holder

Darren 'Pancho' Riley is a relative newcomer to film photography. Prior to buying his first film camera in May 2010, he only ever shot holiday snaps on a cheap digital camera. His discovery of film awakened a real love for photograpy. He uses many different cameras but his favourite's are the Holga 120GN and the Lomography Sprocket Rocket.

Darren lives in Bolton in the North West of England with his girlfriend Becky, and is the first  official UK "Deputy" for The Film Photography Podcast!