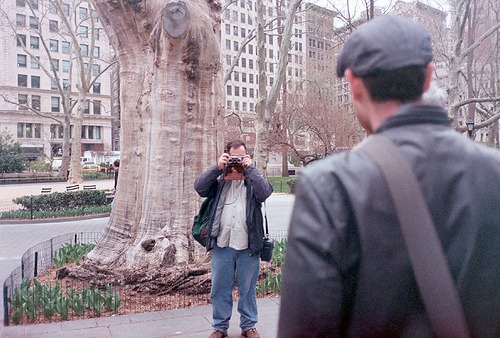 Below is an e-mail from Keith in Los Angeles about ISO. ISO is the film speed. More about ISO can be read here at the Wikipedia. Below is Keith's letter with Mat Marrash's response.

Hi guys, I've been listening to your Film Photography Podcast since... YESTERDAY.
And I'm on episode six at the moment. Last night, I spent about 5 hours listening to your guys' first 3 episodes. And when I woke up this morning, I listened to 2 and I just got off from work so I'm listening to your 6th episode. You guys are awesome!

I just got into film photography when I found my dad's old Minolta camera. I bought my own x-700 and the rest is history. I love film. I stopped using my family's dslr canon. It's been about... a month since I fell in love with film photography. And I've been surfing the web and hitting libraries and trying to soak up every bit of information I can find about film photography.

I can't seem to find a straight forward answer to a question I've been wondering about, so I decided to turn to you guys. My question is: What are the benefits and cons of changing the ISO meter on a camera to a faster or slower speed?

Thanks for your time guys.
Keith Esteban
LA, CA

A: Depending on the type of camera you use, whether its fully automatic, fully manual, or somewhere in between, changing the ISO setting on the camera can have several effects, not all of them pleasant. In general, when you raise the ISO to gain a faster shutter speed, you're intentionally underexposing your film, leaving somewhat muddier shadows and mid-tones with odd color casts to the shadows; some film emulsions can handle this change better than others (slide film hates this!). When doing the exact opposite, lowering the ISO for a slower shutter speed, you're overexposing your film which can lead to blown highlights and sometimes odd color casts in the highlights and mid-tones. Seeing that you use the Minolta X-700, you can just as easily do the same thing by using the exposure compensation or EV +/- dial to modify your shutter speed.

Now when working with a camera that is pretty much fully automatic such as a "Program" mode or "Aperture Priority" mode camera, resetting the ISO can be beneficial when there's no access to an exposure compensation/EV system.

All in all, they're both similar means to an end, but if it where me, I'd stick with the EV +/- dial. And if you're looking for a film that can handle the kind of gross under/over exposure you might need in an iffy lighting situation, look no further than Kodak's New Portra 160 and 400 emulsions. I've personally shot the 400 speed from ISO 200-1600 on the same roll, with pleasing results!

Hope this helps, Keith, keep on shooting, and be sure to post any shots you take with your trusty X-700 on the FPP Flickr Group.