The CINE8 8mm film line consists of new 8mm film stock that is perforated, then hand-cut and hand-rolled in our Film Prep room before being packaged on individual 25 ft camera daylight spools, resulting in in 4 minutes and 10 seconds of footage in most early cameras that shoot 16 fps (or 2 minutes and 47 seconds for those vintage cameras that can shoot industry standard 24 fps). 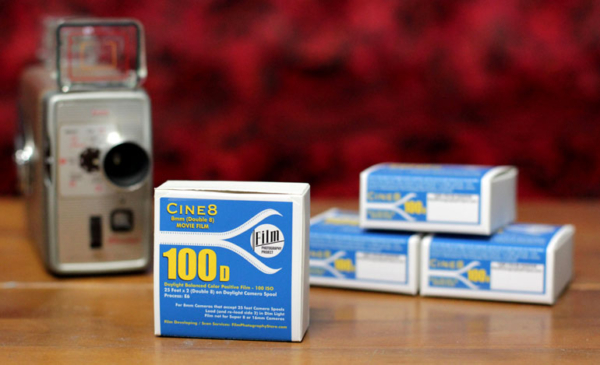 How to shoot Regular 8mm film?
On the first pass through the camera, only half the width of the film is exposed.  Once you’ve completed the first pass, simply open the camera, flip and swap the spools, thread the film, close the camera and shoot the other half of the roll. It is important to note that the CINE 8 film spools drop easily into all regular 8 motion picture film cameras that take 25 ft spools but is not intended for 8mm cameras that take cartridges or Super 8 cameras.

Here are a few Double 8 film options for your camera:

Cine8 BW Reversal 40 ISO (RECOMMENDED!) - BEST CHOICE because the film speed (ISO) of 40 is PERFECT for your vintage manual or automatic 8mm camera! Great for outdoor shooting. Makes apositive movie for projection in a vintage projector (or scanning)

Cine8 High Speed BW Negative - 400 iso -  This is a high speed ISO film (400 iso) and is designed for existing light situations.  This film requires the use of a light meter in order to set your lens f-stop. A Neutral Density (ND) filter is recommended if you wish to shoot in broad daylight.

CINE8 High Speed Color Negative 500 ISO Tungsten – perfect for low and existing light situations including night photography.  The film is noted for its wide latitude, providing incredible detail when scanned - even when over or under-exposed. Color negative film is not for projection - it is perfect for scanning to HD digital file. Process: ECN-2

Interested in Super 8 / 16mm / LomoKino Processing-Scanning? Read all about it here - https://filmphotographystore.com/collections/fpp-scanning-services

Above video - Overview of new films with shots from Cine 8 Color Negative ISO 50.

Did you know the FPP is also sourcing vintage 8mm cine cameras. We vet them, shoot them and then offer them to you at the best price on the planet. The first in the assortment is the awesome Kodak Brownie 8 Funsaver Camera. This 1963 model takes FPP Cine8 film,  is made of sturdy Bakelite plastic and produces sharp home movies. See the video below!

Above video: Overview of the Kodak Brownie 8 Funsaver - How to load - Sample shots. The  vintage BROWNIE 8 FUNSAVER is available at The FPP On-Line Store while supplies last!