Film Photography Rocks!
Catching Up with “Doctor of Rockology” Kevin Lane and the Students of Woodstation Elementary

It is always inspiring to learn more about the members of the Film Photography Project community, many of whom are teachers using film photography as a fun and exciting complement to other disciplines and a tool that emphasizes concentration, process and the rewards of patience. 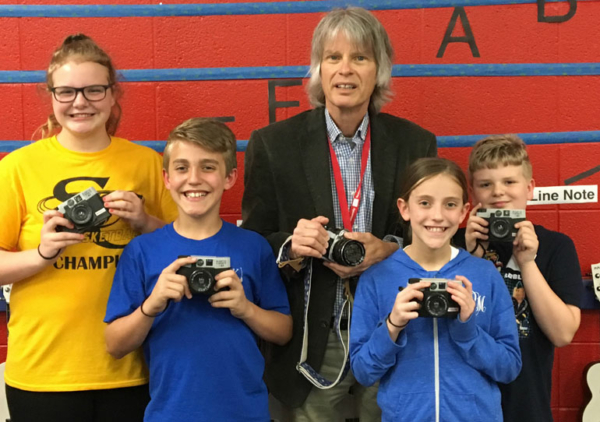 We recently caught up with long-time FPP listener Kevin Lane, an instructor at Woodstation Elementary School in Catoosa County, Georgia whose integration of film photography and music earned him the Woodstation Teacher of the Year award in 2006.  Here’s what Kevin had to say about his influences, and how they shaped the program he developed to communicate the relationship between music and other fields of study.

What inspired you to start instructing film photography to your students?

One of our ten standards in the Georgia elementary music curriculum is to understand the relationship between music, the other arts, and disciplines outside the arts. For the past several years I have organized an art project to help my students meet this standard. Because the project usually takes place in April (which is Jazz Appreciation Month), often the project involves a connection between visual art and jazz. And since Record Store Day is always on the third Saturday of April, I usually work in a connection with vinyl records and recorded music in general.

I was aware of the legacy of Francis Wolff, who not only was the co-founder of Blue Note Records, one of the leading jazz labels of the 1940's through the 1060's, but also photographed every Blue Note session during that time. He shot over 20,000 photographs of the leading jazz musicians of the day, and those photographs often were used for the record jacket artwork, giving Blue Note Records a unique visual style as well as a reputation for some of the best jazz music on record. So, I saw a great opportunity to make a connection from musical art to photographic art by having my students make photographs not only in the style of Francis Wolff, but also using similar methods involving medium format film, processing, and printing.

How old are your film students? How many?

I did this project with 3rd, 4th, and 5th grader, totaling about 240 students. With my K-2 students, I simplified the project to just creating designs on sun paper (cyanotype) to demonstrate the photographic process.

What was your students first reaction to using medium format roll film? The cameras?

Most of my students have never seen a film camera, although the upper grade students that hang out with me the most are used to me carrying around various film camera at school and shooting for the yearbook. Part of the project was learning how the process works, including the camera and light-sensitive film. All of the students were excited about using the camera, several were interested enough to ask about the Debonair and how they could get one. I also suggested to all of them that they "raid" their grandparents' closets and hunt for disused film cameras. 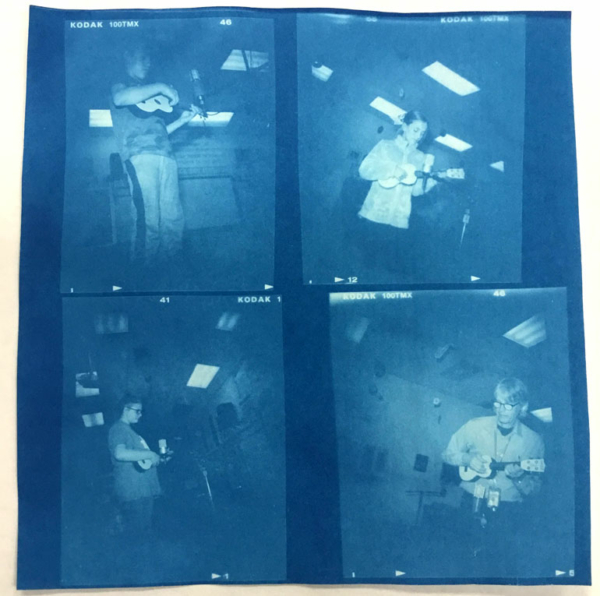 The medium format film was large enough to allow us to make contact prints with sun paper, and I was surprised how well many of them came out. Although I routinely develop film at home in an upstairs bathroom and scan the negatives, I am tempted to make more sun paper prints just for the fun of it!

Thank you, Kevin for sharing your inspiring story!

Thanks again for all you have done to make this project possible.

Kevin Lane is a musician, educator, songwriter, recording artist and amateur Photographer who brings to his work a wide variety of experiences all fueled by a passion for creativity in music and music education. His teaching experiences include elementary instrumental and general music, high school choral music, and college general music. Currently Dr. Lane is the music teacher at Woodstation Elementary School in Catoosa County, Georgia. His integration of music technology and creativity was given as one of the reasons he was named as Woodstation Teacher of the Year in 2006. He has degrees from Tennessee Technological University, Atlanta Christian College, Georgia State University, and a D.M.A. from the University of Georgia. His first album of original songs, Autumn Sky, was released in October 2009. Kevin also hosts (with his brother Kelley) the Uncle Jonesey's Podcast - a radio show all about film photography!