The pinnacle of the school year for many High School Seniors is Prom. In preparation some bought their outfits months in advance waiting for the opportunity to wear it to the highly anticipated event. Due to COVID-19 concerns the class of 2020 won’t be able to take part in it. This project aims to highlight them. – Christian K. Lee

The above quote is from documentary photographer Christian K. Lee, regarding his in-progress shot-on-film portrait series Cancelled Prom.  As of the date of this blog, you can check out the first six examples of Christian’s extraordinary series at http://www.christianklee.com/cancelled-prom. It’s a superb reminder of the many functions prom can serve in a young person’s life – as a reward for hard work, as a rite of passage, an opportunity to express your individualism, or as a final chance to bond with your peers before embarking on new journeys – and a moving example of resilience under challenging circumstances.  We reached out to Christian to learn about the origin of the series, his tools, and how he became so effective at conveying the individuals withing this framework with just one image.

FPP: Hey, Christian!  We are delighted to have this opportunity to hear more about you, your film photography, and your Cancelled Prom series.  Before we dig into your inspirations and start in film photography, would you fill us in on the origins of this series?

Christian K. Lee: I was inspired by my younger cousin who lives in California. She is a Senior in high school and we really wanted to do something to acknowledge her. Her mother and I began to brainstorm virtual ways we could accomplish this. In that same light I realized there are Seniors in my community that also need to be highlighted. I had already been taking portraits of residents protecting themselves in my community, but I felt that I was ready to document the same issue but from a different viewpoint. So, I began the Cancelled Prom Series. I really wanted to approach this project in a unique way, what these Seniors are going through was very untraditional and their stories deserve to be told. I found the Seniors through social media and honestly I was very disappointed at first because I sent out maybe 20 inbox messages to students I didn’t know and only one responded. At that moment I decided I was not going to proceed with the project because one student would not be enough. A few days later I decided this was too important not to document even if it was only one student in the project. So I contacted her and her family and I was able to meet other Seniors because of them. Sometimes you just have to start shooting and the rest will take care of itself. My goal here is not to take hundreds of images to show every single face of the Seniors of my community, the goal is to photograph a few Seniors that are representative of their community. I come from a Photojournalist approach and editing tightly is huge. I use that approach and all my work. 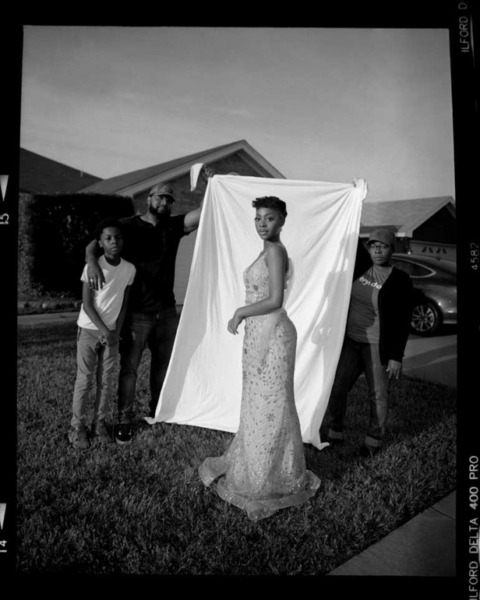 above: Jordan Buie, 18, foreground, wears the dress she planned on going to prom with before it was cancelled due to COVID-19 concerns on Monday, May 11, 2020 in Killeen, Tx. “I cant keep stressing myself about something I cant control,” Buie said. Also pictured (left to right) is her brother Caleb Buie, 13, father Burnice Buie, 39, and mother Wilzata Buie, 38

FPP: The portraits are tremendously moving and so effective in conveying the personalities of the individual students.  I think we tend to lose sight of the individual when hearing group statistics like “2020 seniors can’t go to prom” and your series drives home that while prom is nearly universal for American high school seniors, the experience varies so much by person (further elucidated by the brief contextual comments under each image). In your conversations with the students leading up to the photo, how much do you guide them and how much of the result is their input? 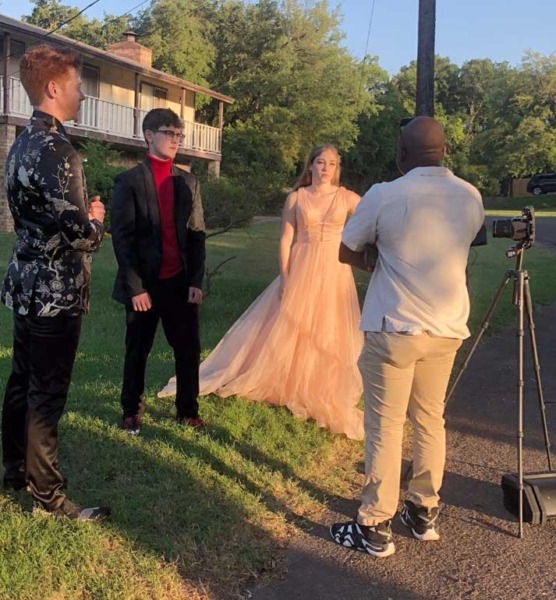 Christian K. Lee: An effective portrait allows the voice of a person to be seen or heard. Usually in large news like this we forget the small parts of humanity that are affected. This project shines a light on the humanity of our high school students. I don’t want their sacrifice to be forgotten. When photographing the students there is definitely a thin line between guiding them and listening to their ideas.  My goal is to keep a consistent theme but I also want to ensure that I’m listening to what they have to say and paying attention to their natural body movements. For example I made a portrait on the bridge of Alexis Iliff and her family. This happened because I had a conversation with her family days before photographing them and they shared with me how important that bridge was to graduating Seniors and their community. In her town it is a tradition at her school for couples to walk across the bridge the day of prom. She describes it as being a red-carpet moment. 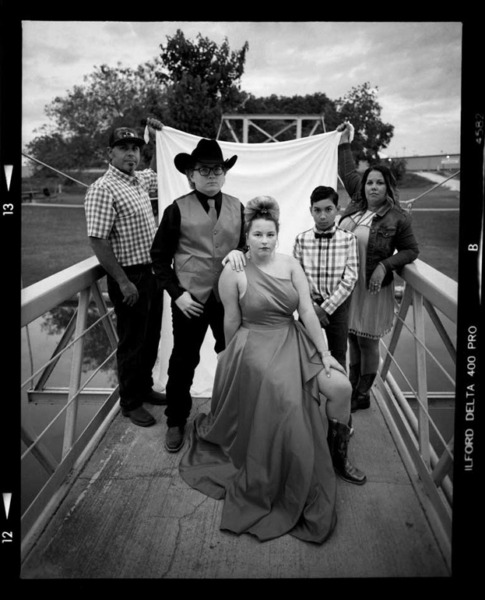 above: Alexis Iliff, 18, center, wears the prom dress she planned on wearing to prom before it was cancelled due to COVID-19 concerns on Saturday, May 9, 2020 in Lampasas, Tx. It is a tradition at her school for couples to walk across the bridge she is seen on the day of prom. “The whole town comes out and it makes you feel special like a red carpet moment,” Iliff said. Also pictured (left to right) is her father Sammy Fernandez, 39, boyfriend Jonathan Jonas, 18, younger brother Kaiden Fernandez, 12, and mother Dawn Fernandez, 41.

FPP: Why did you feel film was the medium for this series?

Christian K. Lee: Shooting this project on film, I was able to spend more time with the Seniors. The slower progress of producing an analog image makes the experience more intimate and I believe that their sacrifice deserved to be captured in a way that only a film photograph would allow. I believe that they deserve to have someone invest time into them and I felt this was the best way to do so. 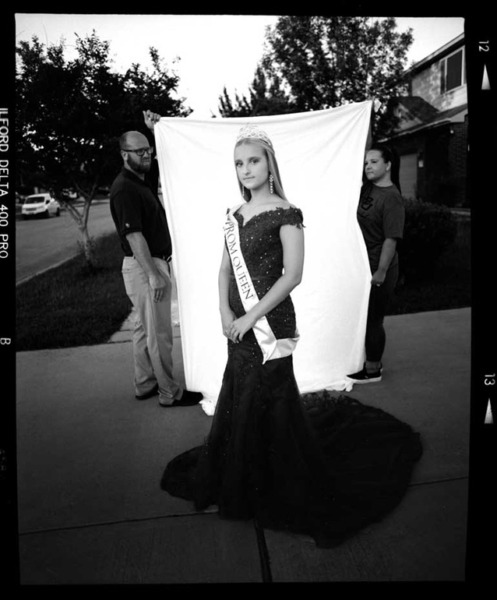 above: Faith Dearing, 18, wears her sister’s prom queen sash along with the dress she planned on wearing to prom before it was cancelled due to COVID-19 concerns as her mother and father drapes a backdrop behind her on Wednesday, May 6, 2020 in Killeen, Tx. “For two years I waited to run for prom queen to fulfill what my sister did when she was in high school but now I won’t be able to,” Dearing said.

FPP: We would love to learn more about you and your film photography – when did you first shoot on film?  Has it always been your preferred medium?  What drew you to photography, and specifically to portraiture?

Christian K. Lee: This project is shot on a Pentax 6x7 Medium format body using a 150mm lens and Ilford Delta 400 film. I’ve recently started shooting film - in fact this is my first major project using it. I’ve always had a desire to shoot it, I just never got around to it. I spent years learning about the process before I even touched a camera but now I’m all the way invested. It’s a totally different experience and I love it. The majority of my work is photojournalism based with fast turnarounds and strict deadlines to turn work into a publication. So digital is the better medium for that format but now that I recently joined the Army and photography is not my main source of income anymore I can really take my time and document a subject in a more intimate way. I currently only own analog equipment and I can see it being that way for a while. I was initially drawn to photography in college, during the Ferguson Unrest I got my first test of photojournalism and I was hooked. I find myself more interested in people and I believe film helps to slow the process down some and focus more on the subject. 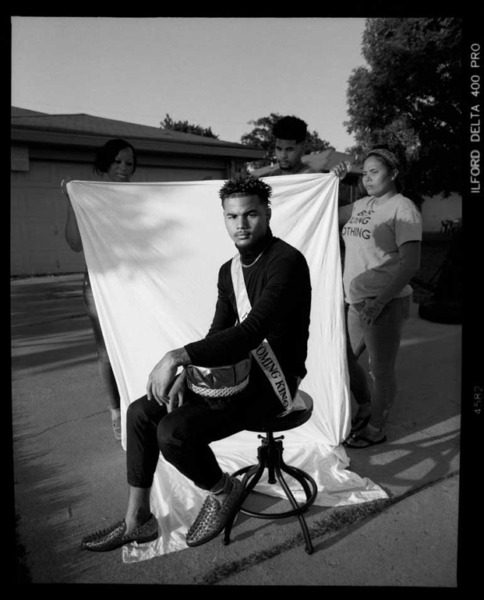 above: Demareyo Tittle, 19, foreground, wears part of the outfit he planned on going to prom with along with his homecoming king sash and crown before it was cancelled due to COVID-19 concerns on Saturday, May 9, 2020 in Killeen, Tx. “I feel like we wasted our money,” Tittle said. Also pictured (left to right) is his grandmother Erma Allen, 56, brother Omarie Tittle, 16, and mother Juanita Franklin, 36.

FPP: Christian, thank you very much for your time. Like us, our audience will want to keep up with Cancelled Prom and your other projects.  Where can we find you on social media, and is there anything else you would like to draw our attention to at this time?’

Christian K. Lee: I’m mostly active on Instagram @chrisklee_jpeg. I’m planning to put together an exhibit for the students in this community so they can be recognized, but of course that is expensive. So, I’m currently in search of a partner who would be willing to be a part of the exhibition.

FPP: You can contact Christian through his website or by emailing him at E: christiankinglee@gmail.com and find out more about him via the bio page of his website.

Christian K. Lee is a documentary photographer with photojournalism credentials including The Washington Post, the St. Louis Post-Dispatch, Zuma Press, and the Chicago Sun-Times following an internship at the Los Angeles Times. All photos © Christian K. Lee.