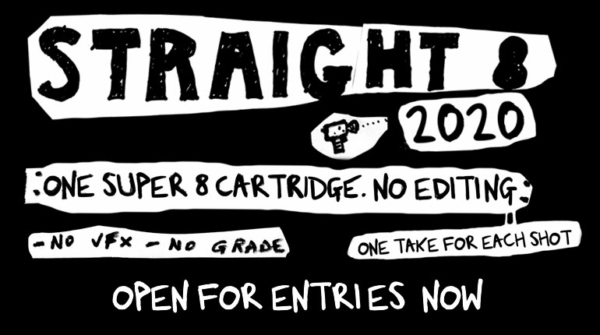 For those not familiar with it, straight 8 is an annual film competition open to super 8 film shooters world-wide.  The entry guidelines are simple: shoot your film on one super 8 cartridge, edit in camera, no post.  Record an audio track, which straight 8 will attach to the film after processing.  View the results for the first time, in public, at the straight 8 screening at the Cannes Film Festival! Sound exciting?  We thought so too and were so impressed by some of the straight 8 entries we reached out to the team behind this amazing annual analog event.

Film Photography Project (FPP) - Hi, Ed – thank you for taking the time to speak with the FPP about your annual super 8 film competition, straight 8, which we understand just celebrated its 20th birthday! Would you tell us why super 8 format holds such an appeal for you, and what events led to the first straight 8 competition in 1999?

ED - Thanks for asking!  Super 8 is an amazing format. Affordable enough to let anyone experience the wonder of shooting celluloid moving image but expensive enough to make you really care about what you shoot. Aside from its appealing aesthetics it offers itself as the perfect way to enforce the rules of straight 8. With light actually exposing chemicals on film every time you take a shot; you’re really committing your story and can’t go back (apart from double exposing!) I was not that interested in just taking shots but rather using them as part of some storytelling and seeing how they work in context. The hard part - not being allowed to change your mind, the edit etc - later means you really have to interrogate your instincts for what shot works where, when and how and then make a decision and go with it.

The first straight 8 in 1999 was born out of  a 2 year procrastination of mine having had this idea to try and make a complete and watchable film on one cartridge of super 8, seeing it all done the first time it went on the projector… yet not actually doing it. Then I finally thought about inviting friends to take a cartridge each, and all doing the same thing, with a deadline - something everyone benefits from. The friends nearly all worked in commercials - we had editors, d.o.p’s, directors, producers, runners…  no theme was set and everyone made very different and entertaining films.

FPP – How has the festival changed over the past 20 years? I’m wondering specifically about the criteria for entry, the rules and the location of the screenings - which for the past few years have coincided with the Cannes Film Festival, correct?

ED - The challenge has not changed and we still encourage anyone anywhere to make a film this way. Different film stocks have come along, different ways of projecting and yes, different places have emerged to screen our premieres. It’s actually our fifteenth year at The Cannes Film Festival in 2020. We shortlist the entries to around 20 to give to our jury which this year including the like of Asif Kapadia and Robbie Ryan who then debate the final 8 we screen at Cannes and we screen those and a lot more in an iconic Central London cinema. The filmmakers never see their own work until the premiere. We’ve even had films broadcast on Channel 4 terrestrial TV right after the evening news to a viewership of around 1 million, and even then the film’s makers had not seen even their own work first! 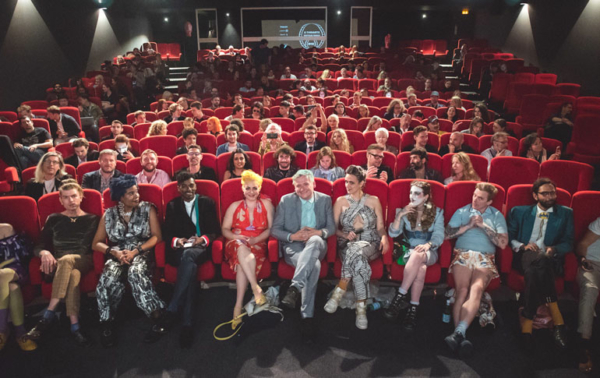 FPP – are there a few entries over the years that stand out for being the most unusual, outrageous or otherwise story-worthy?

ED - 100%  otherwise we would have stopped.  People often think it’s a very experimental thing, straight 8. While that’s true in some ways - I mean you don’t get much more experimental in film trying to tell a whole story and not knowing if it worked out until its public premiere - the resultant films are far more engaging and entertaining to a non-experimental-film audience than one might imagine.

If you’re asking me to call out some favourites, that’s a no-no - like a parent you never have a favourite! However, to celebrate our first 20 years, we screened 20 straight8est hits volume 1 at London Short Film Festival and Berlin and more. this year… we forced ourselves to pick 20.  You can view it here. Be ready for the madness of ‘deja vu’ (7 skodas pushed off a cliff), ‘sticks and balls’ (golf and sex linked like never before), ‘stephen’s cat’ (stephen hawking’s cat musing to the audience via it’s buttocks on stephen’s snazzy new chair) and more….

FPP – I understand at one point there was a straight 8 television series, would you elaborate on that?

Ed- in 2004 were commissioned by Channel 4 (UK) to make an hour of TV: straight 8 on tv. we shot a doc about the entrants making their films, also explaining the process and super 8 itself and also showcased some of the best films.  It got picked up for repeat viewing but sadly not re-commissioned. it would make a great annual show, in our humble un-biased opinion.  joking aside - it really would….. Netflix and everyone… if you’re reading this.

FPP – is there a platform where can fans of this format can watch previous entries into the straight 8 competition?

100% - our website (straight 8.net) and our vimeo channel (vimeo.com/straight8) should entertain, shock, awe, raise a tear or two and inspire anyone to have a go. 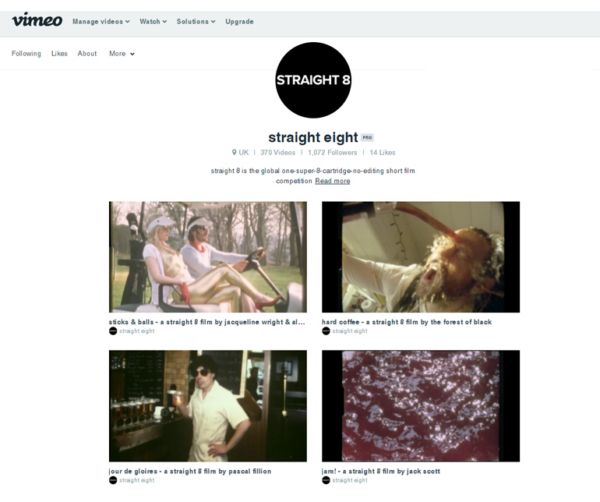 FPP – we noticed Cinelab in London is your go-to lab for processing entries into the straight 8 competition.  Are there any other organizations or labs you would like to mention or thank for their involvement at this time?

Cinelab London have been our main partner since we re-booted, after a 3-year hiatus, in 2016. They’re a brilliant lab doing everything from 65mm down to Super 8. It’s run by a passionate team of professionals working with top studios and production companies on full blown features and everything else. The consistency of their service and support is incredible and shows how they really do exist to support filmmaking on film.

Michael Fassbender and Caroline Carver.  Which format did you shoot “The Goldfish” with, and what influenced your decision?

I would say I’m format agnostic.  I do love film, but many projects I shoot benefit from being shot on digital too.  In that instance I was curious about allowing the performers lots of room to improvise and shooting long takes with the camera also improvising with some fluidity in the set. Digital was just emerging as a serious format and we filmed on one of the first Sony HD cameras available in London before it could even go out on set. Ivan’s XTC - a brilliant film also made on digital was a definite influence on that approach and decision.

FPP - Have you found opportunities to fold analog formats into digital projects?  Do you feel analog formats elicit a different response from the viewer?

ED - It’s too early to say too much but we’re working on a longer project now which if it comes to fruition will see modern digital and super 8 married together for good narrative reason. Analog formats work very differently to digital and also very differently to each other. If you shoot 35mm Vision 3 Neg, it’s a much subtler distinction from well shot and lit Alexa etc on carefully chosen lenses... the difference is there and it’s a worthwhile choice but it’s something many viewers will feel more than notice outright. Then if you shoot 16mm reversal, or Super 8 or for that matter VHS or Hi8…. there’s an impressionism that can start to creep in as the visuals aren’t so crisply recorded and presented to the viewers’ eyes. We’re lucky at this time to have so much choice and we have to hope that will continue to be the case for as long as possible. I don’t want to live in a 6K world only, even as a viewer. It’d be like saying that the only paintings allowed to be created have to be in a Dutch Realist style, or all music can only by made in Logic on a computer… or some better analogy than those... 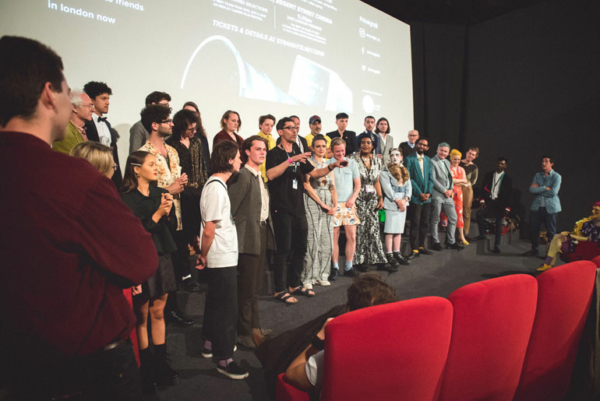 FPP - Who are the other members of the team behind straight 8?  We’d love to know of any projects you or they currently have in progress or have recently completed.

ED - Currently three of us make straight 8 happen part-time around our other projects and work. The fantastic thing about it is the community of people who do or have engaged with it continue to influence more people who want to give it a go. So thanks to that it’s a bit like all our three combined efforts are like blowing the base of fire and putting new wood on top. And we’d like it to burn bright for a good long time more.

Will has been involved with straight 8 since he entered for the first time in 2005. His straight 8 entries from 2006-2011 all screened at cannes film festival and somewhere along the way he started helping out at straight 8 shedquarters. He’s an evangelical film shooter and shoots weddings on super 8 and 16mm film via cinereportage.com

Alex has been involved with straight 8 since he shot a behind-the-scenes film of a music video Ed was directing in 2015 and never left. He makes films for companies alongside working on straight 8, and shoots a lot of 35mm and 120 stills. He promises he’ll eventually start sharing them on Instagram (@glynnalex) but don’t hold your breath...

FPP – Thank you, Ed and straight 8!  If Cannes isn’t in your travel schedule this year, you can check out additional straight 8 screenings as announced on their website, with past events held in conjunction with Slamdance, Encounters, and Partie de campagne festivals to name a few! You can follow straight 8 on facebook, @straight_8_ on instagram or @straight8 on twitter, or click here to enter straight 8's 2020 competition.


And if you would like to enter this year’s straight 8 contest, head over to straight8.net use discount code FPP20 for 20% off the cost of admission! 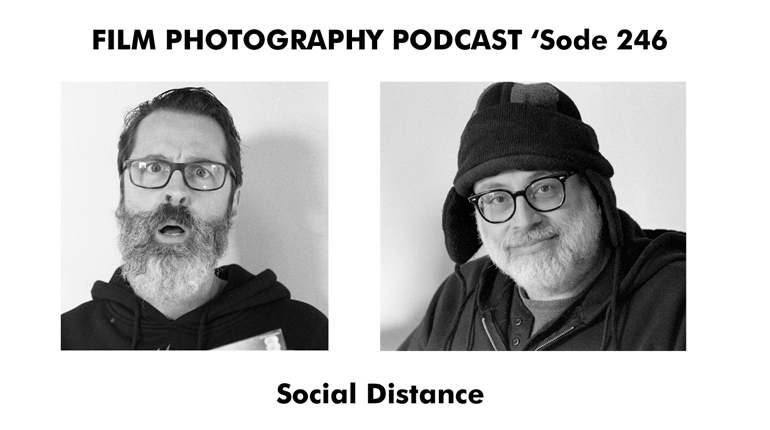