Long-time FPP friend (and awesome photographer) Joseph Brunjes posted this article on his FaceBook page. Thanks to Joseph and the Haddam Firefighters for allowing us to repost. I would also like to mention that over 40 of Joseph's tintype photos will be on display August 29 - September 30, 2015 at Mount Airy Cyclery Gallery in Mount Airy, NC. Details at the bottom of this page. - Michael Raso, FPP 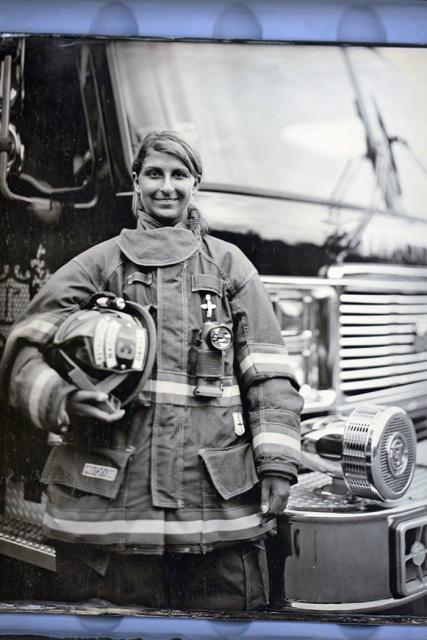 Joseph Brunjes emerges from behind his 8-by-10 view camera, which despite its old timey appearance (the camera) is a little more than a year old. "Now hold for five seconds," he tells his subject, squeezes a bulb that opens the shutter and counts. 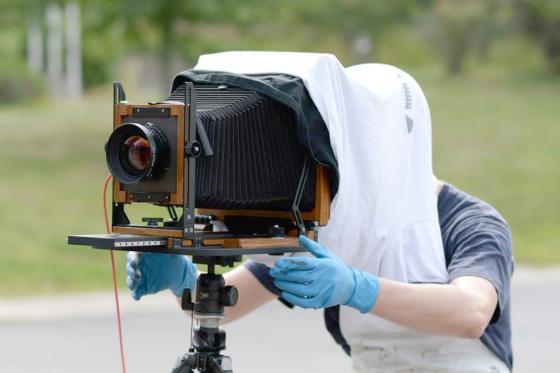 In the world of perfect, easy photos, smartphones and digital cameras are king, and if film is dying, tintypes are extinct. At least they would be without people like Brunjes. He's part artist, part chemist —a man who prefers getting his hands a little dirty to editing photos on a computer.

The Wilmington, N.C. native and resident of Killingworth, Conn. was a first prize winner at the prestigious 2014 Images photography competition and exhibition for his large format portraits of musicians. Primarily a film photographer, Brunjes fell in love with the art of tintypes in 2012 after attending a workshop at the Center for Alternative Photography in New York. 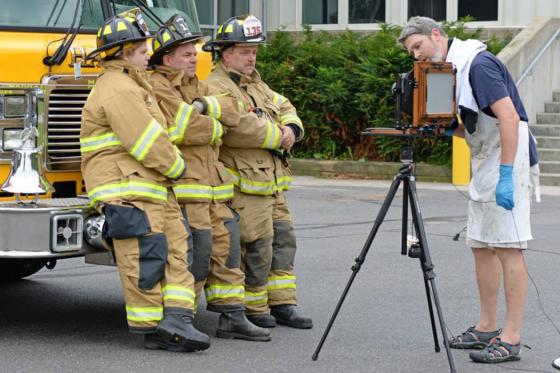 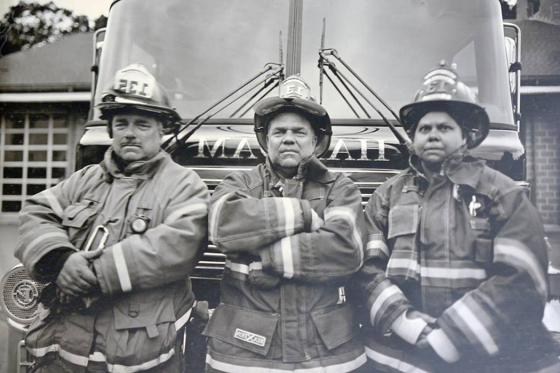 He groups his tintype portraits by theme, like "Killingworth Historical Society," "Men and Their Vehicles" and "Musicians" — a subject close to his heart (Brunjes is also an accomplished violinist and conductor).
The tintypes taken at the Haddam Volunteer Fire Company on Aug. 31 are part of a series titled, "Volunteer Firefighters of Connecticut." 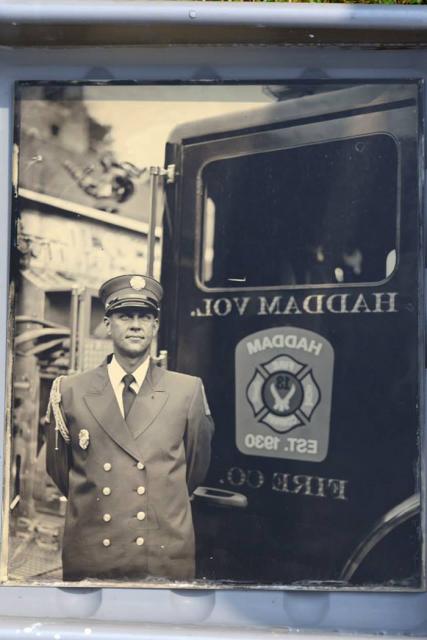 "I thought local firefighters were a good subject because they're unsung members of our community," Brunjes said.

A tintype is a positive image on a metal plate. The process is similar to daguerreotypes and ambrotypes, which were positive images on glass. Tintypes are black-and-white photographs made on thin aluminum sheets. The broader term for the process is Wet Plate Collodion because black plates are coated with a chemical named collodion and the plate is processed while still wet.

Before tintypes, photographic processes were expensive and accessible to an elite few. After their arrival in 1856, the low-cost process allowed itinerant photographers to travel from town to town, bringing the public cheap, fast photographs on sheets of blackened tin, the quality of which rivaled even the finest painted portraits.

Tintypes gained prominence during the American Civil War as a candid means to document individual soldiers and horrific battle scenes. One of the last known photographs of President Abraham Lincoln was a tintype. Photographers used horse-drawn carriages to cart around portable darkrooms, chemicals, unwieldy wooden cameras and heavy tripods. To capture scenes from the Wild West, photographers worked out of covered wagons. 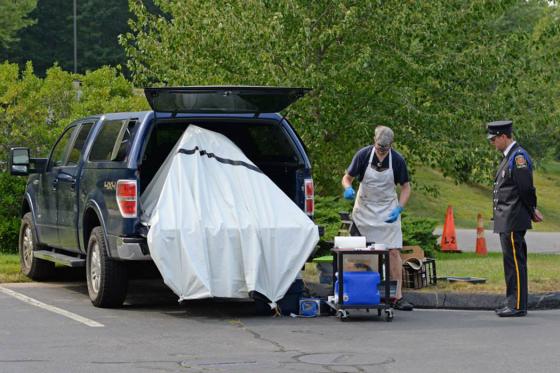 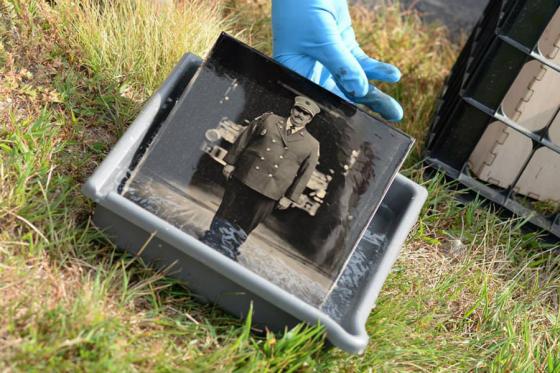 Brunjes works out of the back of his truck, with a small tent acting as his darkroom.

Making a tintype is kind of a repeated relay race between prepping the metal plates with light-sensitive chemicals, crawling into the tent-turned-darkroom to let the chemicals set, crawling back out to compose the portrait, crawling back in to get the plate, taking the shot on a large, boxy camera and finally returning to develop the image.

For sitters, or standers as was the case Sunday, it means making slight adjustments to your posture to find the right pose, waiting for the sun to break through the clouds and concentrating on being still for what feels like minutes, but is really only seconds. 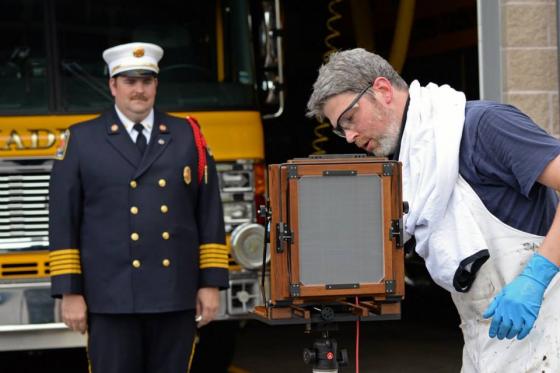 "Getting your picture taken is an awkward experience, especially like this," Brunjes tells Haddam Fire Chief Sam Baber, "so if you're feeling awkward, that's completely natural."

Watching Brunjes work is watching a man who loves what he does. "I never get sick of this," he says while placing the bluish plate into a fixing solution. Slowly a striking, ghostly image appears.

Despite all the chemicals, making a tintype is anything but a perfect science. The process is full of surprises. The photo comes out as a mirror image reversed left to right (which Brunjes corrects in Photoshop prior to printing), and variations in lighting and colors have unexpected consequences. Haddam Fire's yellow trucks, for example, appear as black.

"It forces you to look at things in a different way," Brunjes says. "It's sometimes unpredictable but the flaws are what make them one-of-a-kind, and often more interesting than anything I could have done by design."

To see more of his tintypes, visitwww.josephbrunjes.com.

The Haddam Volunteer Fire Company responds to all areas in the Town of Haddam west of the Connecticut River, including the Villages of Higganum and Tylerville. Our response area is about 46 square miles populated by about 7,300 people. We work out of three stations and are an entirely volunteer organization established back in 1930. http://www.haddamfire.com/