It's hard to believe it's already been a month since the 2015 edition of the Film Photography Podcast's Walking Workshop. What a splendid time at a fabulous location, and being surrounded by some of the coolest folks on the west coast! While the whole weekend was a film-tastic blur, I'll do my best to recount it for everybody out there that didn't have a chance to attend.

Waking up insanely early to make a 6:00AM flight out of Columbus, OH, I reached for the bare essentials. My new favorite medium format rangefinder, the Mamiya 7, two lenses, the Olympus XA,  some Portra and a LOT of E6. You guys do know that 2015 is THE YEAR of slide film, right?! Off to the airport, destination the beautiful, sunny South West. 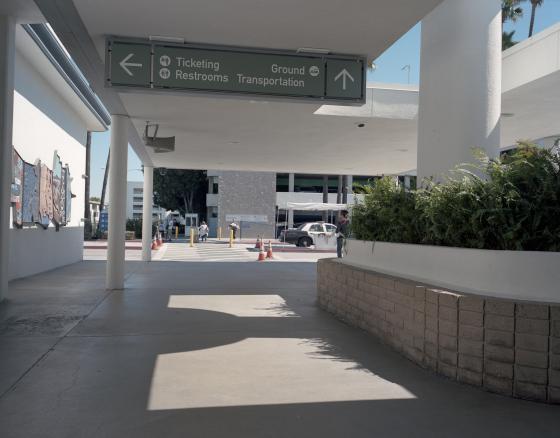 Skip ahead a few hours of travel, and it was like entering a completely different country! The cozy, endearingly small Long Beach Airport coupled with 85 degrees F temps were more than enough to put a smile on this Midwesterner's winter-worn face. I literally exited the gate, walked 50 paces to get my bag, then promptly exited to the street. A few more minutes of soaking in the Southern California sun (enough to burn me good!) and ran into these familiar fellows...(Mr. Mike Raso & Mark Dalzell) 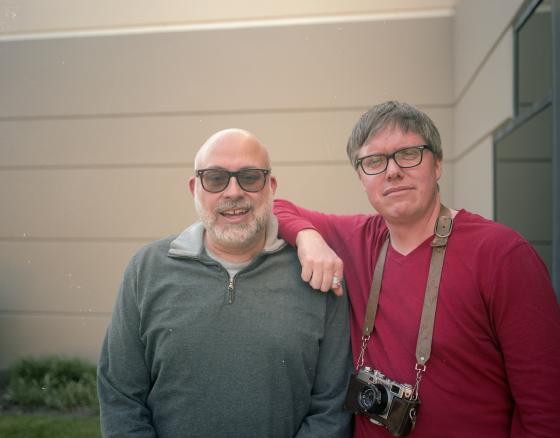 A quick bite to eat and a few minutes of near rush hour traffic later, we were at The Darkroom, meeting with Mr. Keith Swan and Mr. Phil Steblay, the two gents behind the whole operation. With nearly sixty years of combined photo industry experience, Keith and Phil know how to run a tight ship, and one of the coolest labs I've ever had the pleasure of visiting! After discussing the weekend's game plans while checking into the hotel, it was already time for a sunset dinner. Like many of my gigs on the road, there wasn't even enough time to enjoy the pool. 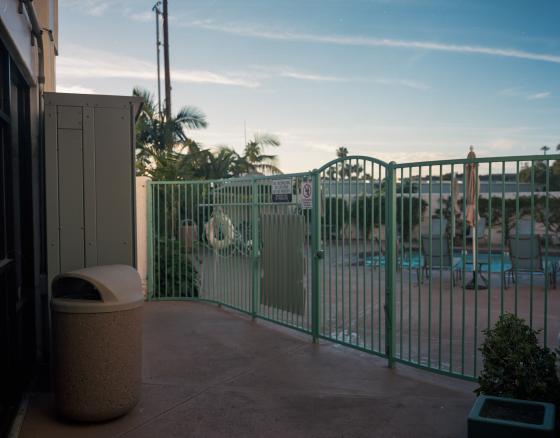 While for many the day didn't begin until 9AM, staff at The Darkroom had been up and prepping since 6AM! Not only is The Darkroom a dedicated lab, they're just downright good people that helped to host an amazing weekend. Here are some of the features waiting in store for Saturday's attendees: 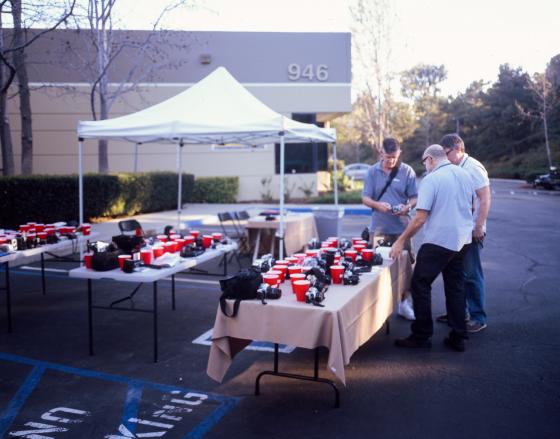 It wasn't too long into setting up for the day when FPP'ers started rolling in, and even help us get ready! Big props to long time FPP contributor Rick Paul for getting there minutes after we did and helping with setup. Right about here is where things start to get fuzzy in my memory. There were FPP'ers coming from all over the South West, and even some from as far East as us! 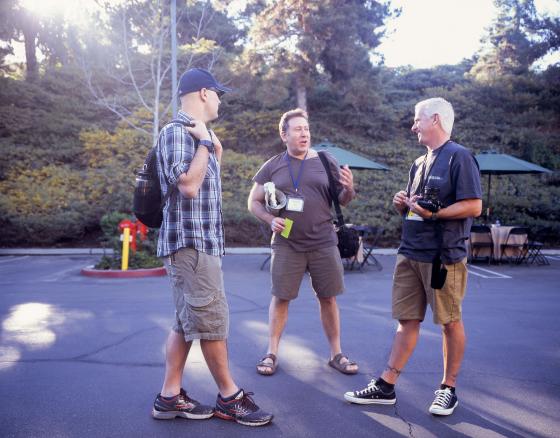 And before long, we had nearly 100 people occupying the entire property of The Darkroom. This party was just getting started. 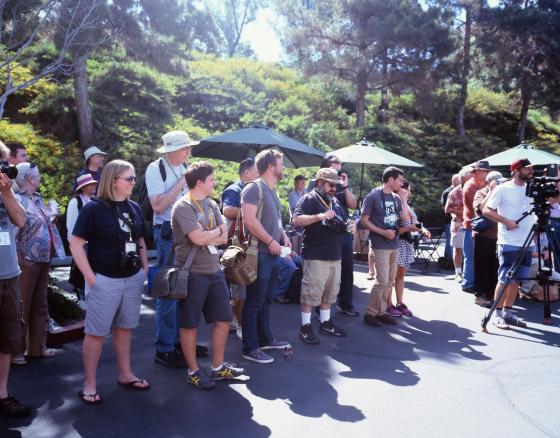 As Saturday's meetup transitioned into the afternoon schedule, attendees had the opportunity to: 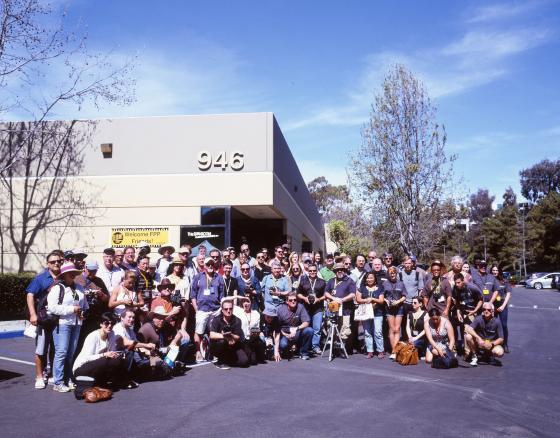 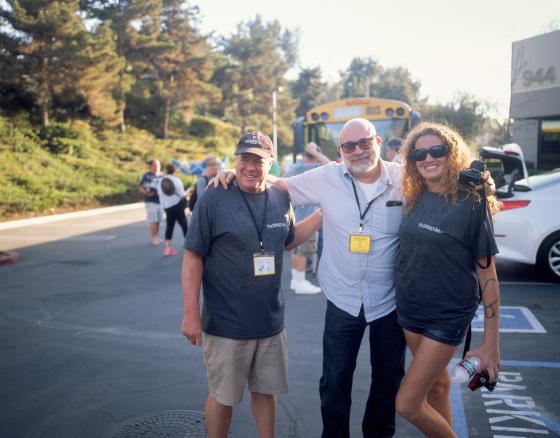 As the giveaway table started to empty out and we were all starting to settle into the afternoon, a bus pulled into the parking lot. 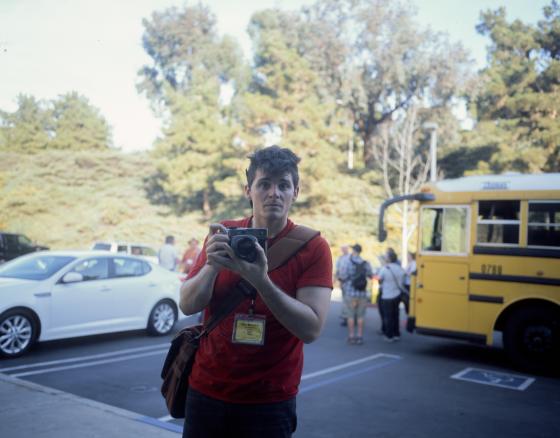 The Darkroom had more surprises in store for us as we had attendees shuttling back and forth to the local pier. The afternoon light was beautiful, and just the thing for all this Velvia 50 that was still in my camera bag. 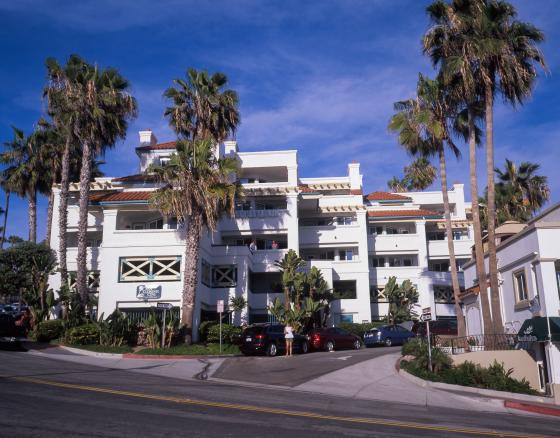 While at the pier, we FPP'ers did what we always do: 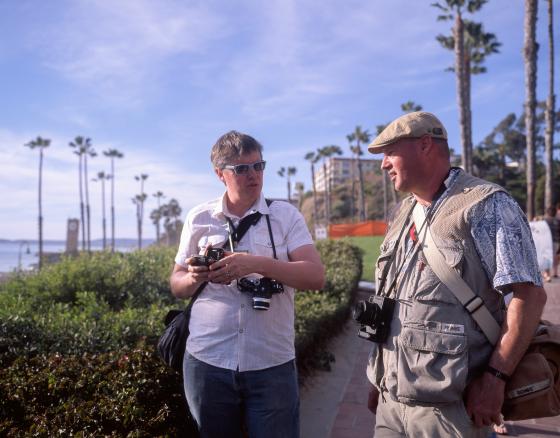 A good two hours of film shooting and camaraderie later, many of us were relaxing by the bus stop wondering where this nine hour day had already gone. 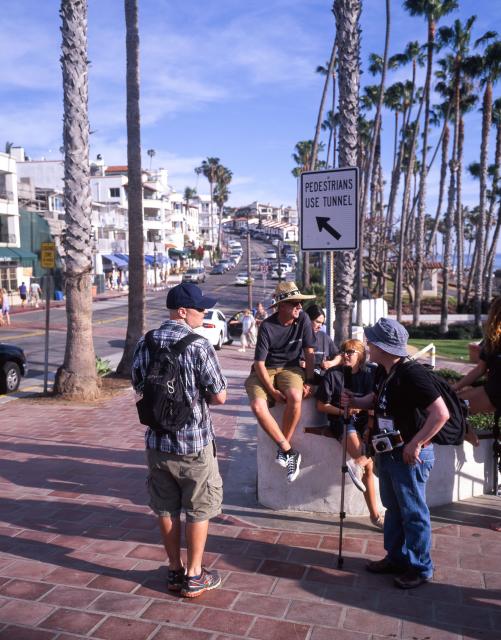 Another bus ride a short walk later, and many of the FPP'ers were down the street dining out at a local food truck + cantina. Film stories and Polaroids were swapped, and before we knew it, the sun was already starting to set. 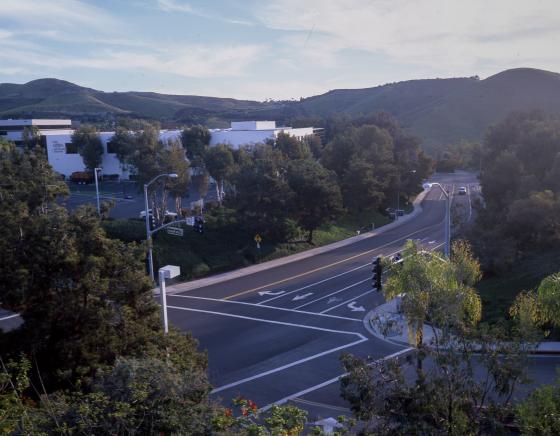 While there wouldn't be a lot of setup to do after the whirlwind that was Saturday, Mike, Mark, and myself all got up super early. With all this great early morning light, why let it go to waste? 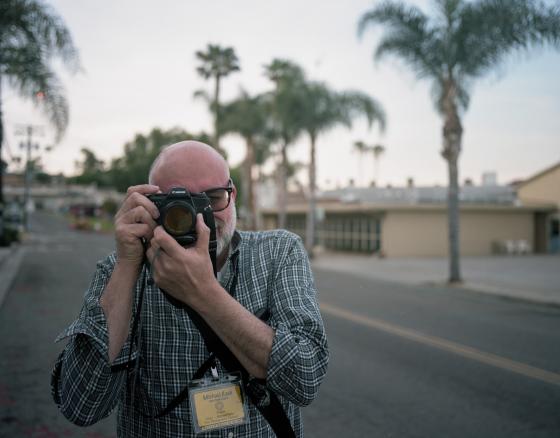 With the collective misdirection of three film-crazed Easterners, we managed to get lost within a half mile of our hotel, and get some fun shots while doing it. 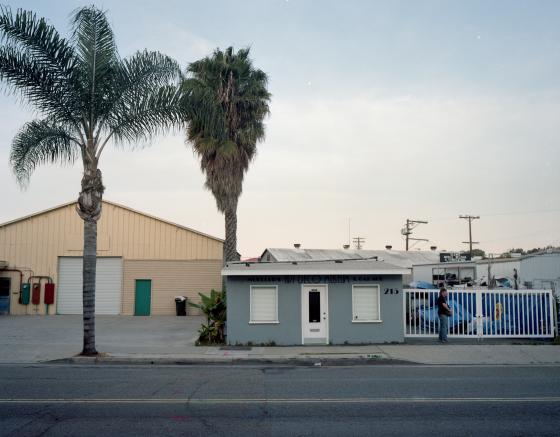 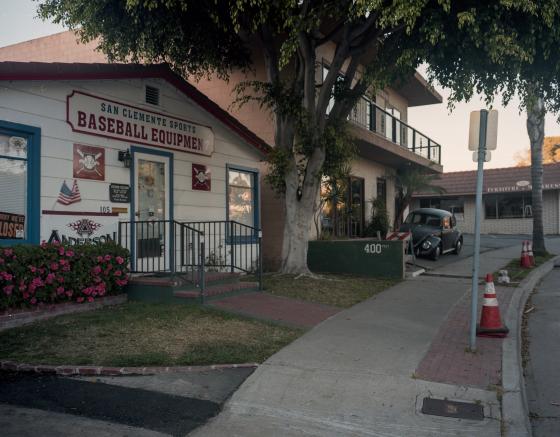 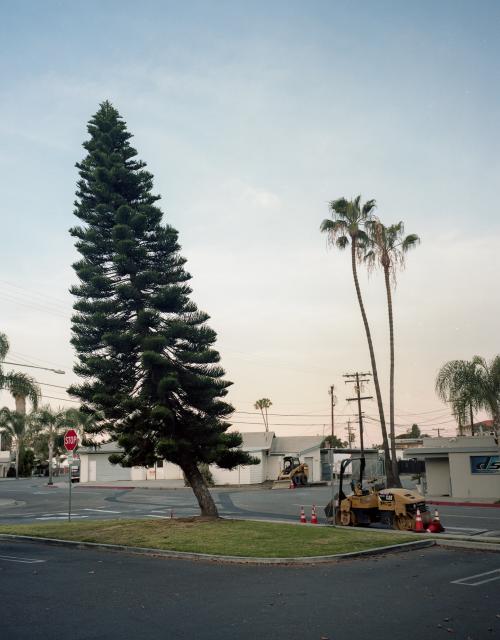 By the time we got our bearings and found our way back to the hotel, it was already time to head out to start the day of medium & large format. To my surprise over half of Saturday's attendees were ready and waiting to get in on the action. 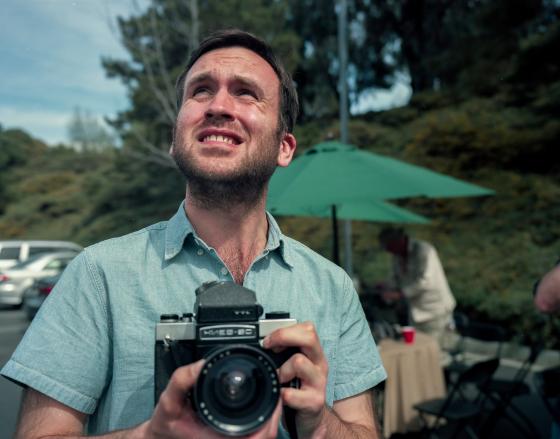 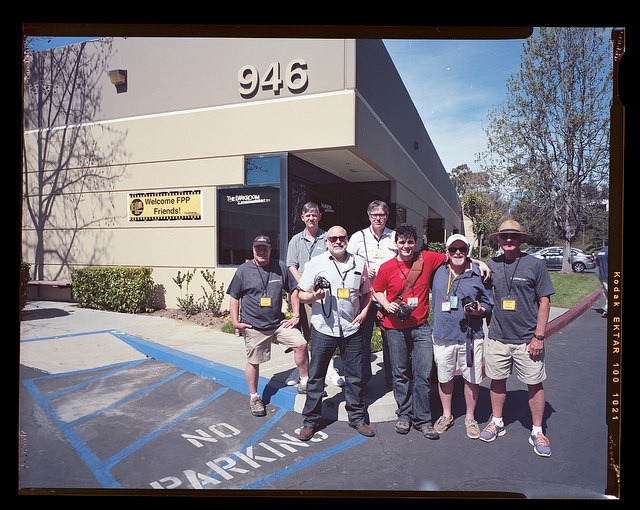 Being a very demonstration-heavy, hands-on day, I didn't have as much time to document as I would have liked. Fortunately, there were dozens of medium and large format cameras present to do some of the heavy lifting. 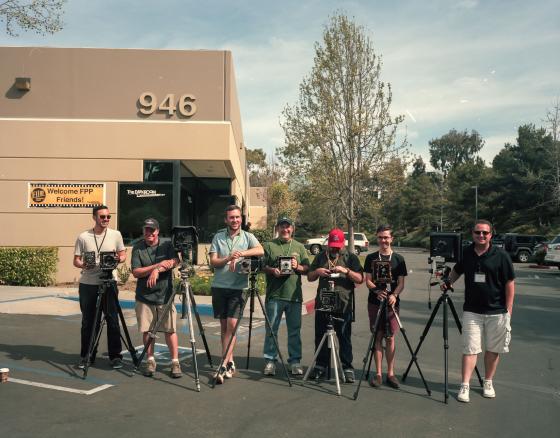 And as quickly as the weekend had started, it had flown by with hundreds of rolls and sheets of film in its wake. According to The Darkroom, there were over 900 rolls and nearly 100 sheets of film left for them to process the following week (most of which they had done by that Tuesday!). But don't take my word for it, just check out all these photos tagged from the 2015 Walking Workshop:

Wrapping up this photo recap of the FPP Walking Workshop, I'd like to thank everyone that came out to San Clemente to make 2015's Workshop THE BEST yet! Without your help, enthusiasm, and support of film, we nor The Darkroom could make such an awesome event happen. The bar for film events has now been set pretty high, who knows what the FPP will have in store for 2016?! :)

The Annals of FPP History recorded a Super Positive event on March 14 and 15: The first ever FPP Walking Workshop on the West Coast, hosted in San Clemente California by the FPP Crew and the wonderful folks at The Darkroom.

Indulge me please as I offer a plug for The Darkroom: Support them! They deserve it for the quality of their work, for the care they take to do things right, for their support of the film photography community, and for their generosity in hosting the gaggle of gear geeks that descended upon them that weekend.

If you were one of the lucky few that made it to the FPP Walking Workshop 2015 you’ll undoubtedly agree with me. If you didn’t make the Workshop, find out more about The Darkroom here: thedarkroom.com.

And yet, so fun and interesting were the events of Saturday morning that I feel even now that I experienced a fulfilling weekend.

I have an urge to say something clever about all the gear I saw: WOW!

Polaroids aplenty! MF and LF in abundance! 35mm wherever you looked. Film galore!

I am now inclined to paraphrase a certain English wartime leader: Never was so much owned by so few!

And some of those few owned even more by the end of the day thanks to the generosity of Mr. Mike Raso and the FPP supporters who donated cameras and other equipment. The post-lunch raffle proved an effective pre-emptive antidote to any potential post-prandial snooze.

A Seagull perched upon the giveaway table looked to be a most popular want, rivaled in appeal perhaps by a beautiful Nikon SLR (I’m not a Nikon man so I’m not sure but I think it was an FM3). Lucky buggers other than your correspondent won these.

No one came away empty handed, though. All attendees were gifted a free film developing coupon and a T-shirt by The Darkroom (I wear mine proudly!) and film Goody Bags by FPP.

As if that wasn’t enough, the picnic tables were charmingly decorated, each with numerous point & shoots. “Free for the taking” announced, Mike,… “first come first served.”

I suppose it will come as no surprise to the FPP crew and the readers of this blog that film shooters are a courteous bunch. I witnessed no rush to grab as Mike’s communication fell upon the ears of the assembled.

Indeed, gentility reigned, as point & shoots were selected, replaced, re-selected, shared, swapped and ultimately bagged to sounds such as “Oh did you prefer that one?” and “No, please, you have it” and “Why thank you, how kind of you” and the like. It was lovely.

I bagged a Klutz. (I felt a connection to it.)

If you’ve never been to an FPP Walking Workshop, take it from me that one of the delights is listening and watching as Mike talks. He gets wound up you know. Get him started on the secrecy surrounding his source of Svema film for example, and you are in for a laugh, as we were in San Clemente.

Equally delightful on the day was our tour of The Darkroom. We toured through in batches of 10 or so FPPrs. My batch was led by Joe, who I understand is The Darkroom’s dark room manager.

Joe knew his stuff to be sure, and answered all our questions enthusiastically and thoroughly.

How these guys keep everything straight in their heads in pitch- darkness as they work their dip and dunk process is nothing short of mind-boggling to me. I mentioned something to that effect but Joe brushed my awe aside with characteristic humility. “You get used to it,” he said. Uh,…yes that must be true, but it makes their skills no less impressive.

Since my day with FPP ended all too early I must leave it to others for a recap of the afternoon walk in San Clemente as well as the events of Sunday. I can tell you though that when the next FPP Walking Workshop for Southern California is announced I’m signing up quick and leaving that weekend open. I’d recommend you do the same. 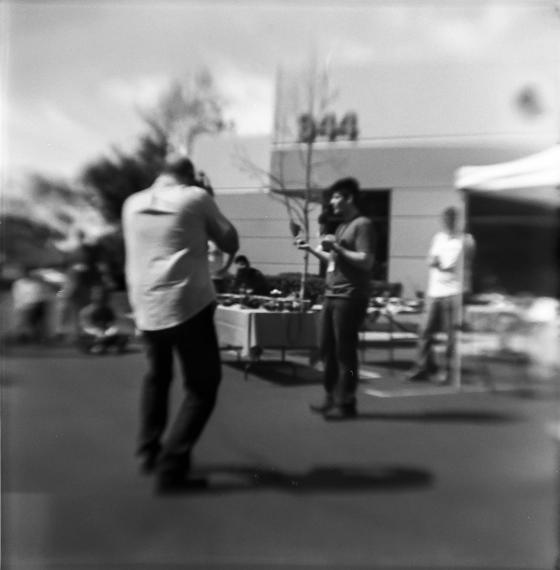 (Editor's Note - Thanks, Brian for the report. So what happened after Brian departed. Wee, Here's FPP's "Nikon Guy" Rick Paul!)

After tours of the Darkroom's facility, and a wonderful lunch, we all boarded the FPP bus to head down to the San Clemente waterfront. Being a beautiful warm and sunny Southern California day, the beach and San Clemente pier were busy, which gave all us film photographers lots of photographic opportunities.

While we spent our time photography the pier, doing some beachside "street photography", the photographers themselves became a bit of spectacle among the public! Some of them were puzzled by these roving groups of photographers roving the beach with some odd looking cameras. Some of the FPP's were lucky enough to be trying out the cameras they just won in the FPP camera raffle.

Looking all the gear each of brought with us, I think it gave us all ideas for the next camera we'd like to add to our own collections!

Aside from the Pier, I think the favorite subject among all the FPP's, was each other!

Aside from the pictures we all captured, it was just fun to use our gear, and have good conversations with our fellow Film Photographers.