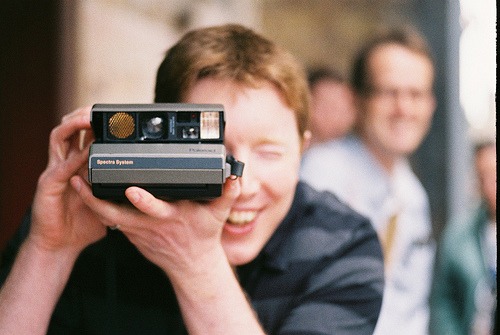 I'm not entirely sure where I first heard about the FPP, I think it might have been on one of the Film Wasters podcasts back in 2011. As soon as I started listening I was hooked and it was right around this time that some of the FPP crew came to London for their first meet up, the problem was I only heard about it mentioned in one of the podcasts three days after it had happened! URGH! Imagine my disappointment. Fast forward to 2012 when I went along to the second FPP London meet up which (as I'm sure everyone who was there would agree) was a magnificent day. Ever since then I've been looking forward to the third FPP London meet up which I hoped would be held this year but as the summer got closer with no mention of it from FPP HQ I assumed that it wouldn't be happening. Then came the official word, no London meet up in 2013. Gutted! It was then that I decided to organize an unofficial FPP London meet up and started a Flickr thread to see if there was any interest. Fortunately there was and a small group of us got together on 17th August for a photo walk.

I've never organized anything like this before so I wasn't quite sure how to go about things but after deciding on a date and a location (London) it was a matter of coming up with an itinerary that would be interesting for a group of people that I mostly didn't know. That was the tricky part because London is a huge place that I don't know particularly well so I had to seek advice from a knowledgeable friend (thanks Dean) who suggested the East End as an interesting part of London to go to. While doing some research I came across a website for the Derelict London walking tour (given by author Paul Talling) which sounded like it had a lot of potential for good photographic opportunities but the tour on 17th August had sold out. I decided to email Paul to ask for some advice on a route that we could take and he replied back suggesting that he could give us a bespoke tour in the morning before his official tour was due to start at 1pm. Result! I agreed a set fee with Paul for the walk which meant the more people I could get to come along, the cheaper it would be for each of us which seemed a fair way of doing things.

We all met in the morning and after a brief meet and greet I handed out some of the film and stickers that Mr Raso was very kind to send over. Our Derelict London walking tour lasted for 2 hours but as we made quite a few stops for photography we didn't end up covering as much ground as Paul had planned so we made a little detour towards the end. I really enjoyed the tour, which was made all the more interesting with Paul's extensive historical knowledge of the area. It's such a shame that so much has changed in the past decade with gorgeous old buildings torn down to make space for ugly ones to go up.

After the walking tour we met up with Abdul, a fellow FPPer who is local to the area and he kindly showed us around the Tower Hamlets Victorian cemetery, which I found, was a really good contrast to the walking tour. Given the right light I think there are plenty of amazing pictures to be made there. Abdul took us on a bit of a walking tour of his own (his local historical knowledge is excellent) as we made our way to Spital Fields which was right where we had been on the FPP meet up last year. I really like the area around Brick Lane, there's energy on the street and lots of characters around which makes for great street photography. After exploring the area for a bit it was time to head back to the train. The light was fading at this point and we had walked many miles throughout the day so a rest on the train back home was very welcome. I had a really great day and I urge anyone out there thinking about organizing a similar unofficial FPP meet up to go ahead and do it.

You can view a gallery of some of the shots made during the day in the Flickr group I created: http://www.flickr.com/groups/londonfpp/
There are still yet more shots still to be added.