Shooting Polaroids in the freezing months! 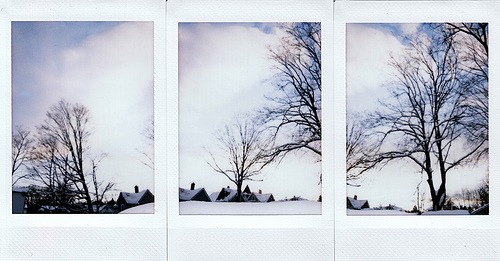 The winter months are always the toughest months to find inspiration and motivation, especially when it comes to venturing out on a photo walk.

Shooting instant photography on foot always poses the problem of – what to do with the images – especially if dealing with the “peel apart” type film that produces a positive and negative. The freezing weather poses additional hardship in the task of film handling.

Cabin fever motivated me to grab my instant cameras and head out on foot in and around Butler, NJ.

The exposed Polaroid 300 prints fit perfectly in my front jeans pocket. I left the prints from the Colorpack II “unpeeled” and quickly tucked each new exposure into my front jacket pocket. Unsure of development time or if the Polaroid 664 film was “self-terminating” developing, I hoped for the best. 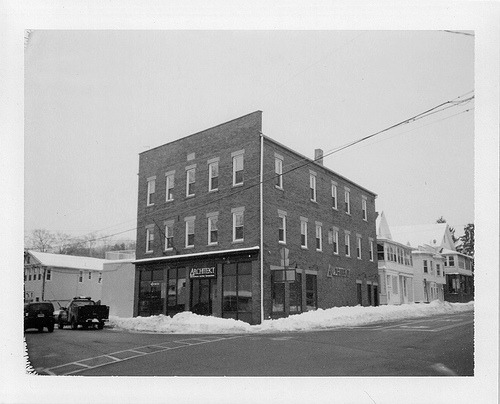 Success. Upon returning to the studio, the peel-apart film yielded very satisfactory monochrome images. Although awkward to juggle the camera and film, the instant gratification of having prints in hand made the chilly walk well worthwhile!

Wondering how others fair with the weather, I reached out to a few fellow instant film shooters on Flickr.com and asked them to share their freezy-frosty instant film experiences. A big thanks to Andy and Frank!

When it comes to winter shots, I'm new to a lot of this and try random things. In my carrying bag I keep an insulated lunch bag that you can get at any grocery store for a few bucks. In that, I put a winter hand warmer so I know roughly what the temperature will be while I'm out walking around. After I take the shot, I set the timer on my land camera and hold the pic in the lunch bag at my side. Doubles to keep my hand warm. I also bring along a few empty cd jewel cases. I have some tape in these that I tape the corner of the pictures down to keep the elements off the image and the goop. I also reserve one for the goop if I'm using polaroid 667 or sepia. I really like salvaging some of the goop shots. Many times they can be better than the picture.

For first time shooters (which I still consider myself) using Fuji film is nice. I find the self-terminating aspect of these films can eliminate a lot of cold weather mishaps since you don't have to peel in the field. I just take the shot and shove it in my coat pocket.

Most of the mishaps I've had have occurred when trying to finagle some Impossible film while hiking. I live near a lot of ravines that I like hiking down and trying to manage a cold clip, my SX-70 while blocking the light can be rather trying.

Hope that gives a few pointers.

In terms of preparing to shoot instant photography in the cold, I'd say prep will vary. If I'm just walking around with my camera in my bag and want to take a shot here, a shot there, there's really nothing I need to do to prepare to shoot. If someone is looking to do a lot of shooting outside in the cold and by that I mean their camera will be out of their bag for more than a few minutes at a time - the metal in these cameras can acclimate quickly to the cold and if it's cold enough, frames sticking together or if integral film, the battery won’t fire. Carrying hand warmers in your camera bag can be a dry way of keeping your camera from getting too cold. If you really need to keep the camera out of the bag the whole time, 'bundle' the bottom of the camera with some hand warmers.

Other than that wearing clothes that will keep you warm enough but allow to keep a zipper open to tuck film inside your coat. If you have pockets that are big enough you can put hand warmers in without contacting the film since that might be too much heat with direct contact.

My routine, be it integral or peel apart, is essentially getting the film out of the camera and getting it inside my jacket. Since with either film type, once it's out of the camera the process has started Getting the film warm sooner than later is important for proper processing. I like to wear a coat that has an inside pocket if possible, otherwise I'll be tucking the film under my arm. I find a cold clip is helpful and can speed the temperature shift, but isn't necessarily a must.


As for mishaps, the main thing to be careful of is actually the process of putting the film into one's jacket. It can be very easy, especially with integral, to be too hasty during this step, and end up folding the frame while putting it away. This can cause tears and layer separation (the sorta fingerprint looking effect) with integral, or with peel apart it could bend and fold the film. A cold clip can actually be a huge help for this since you'd pull the cold clip out and put the frame in, thus protecting it from this problem.

Tips for first time shooters, I think it can help greatly to take a camera with a strap. This helps free your hands instead of worrying about your camera. If this isn't something you've done a few times before, you might not have figured out a way to hold your camera while dealing with getting a frame in a jacket or cold clip. Using a cold clip can help as well. I stress to first time shooters, don't have the camera out in the cold any longer than it needs to be, and same with the film once it's out of the camera.


Shooting in Cold Weather from Impossible Project on Vimeo.